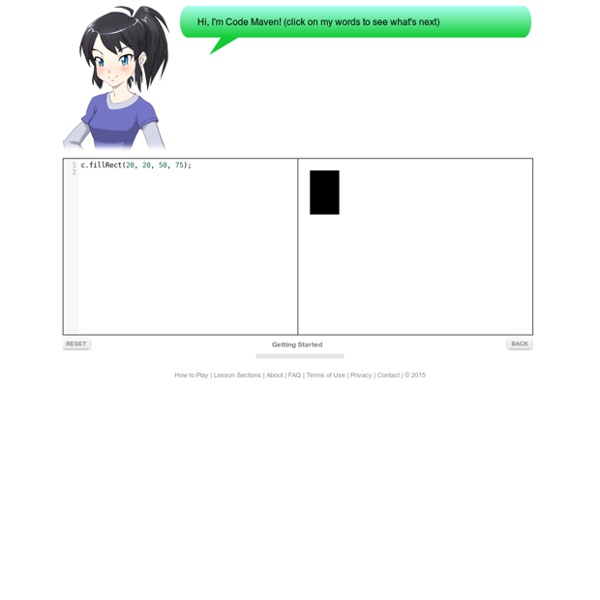 <h2>Code Maven gets teens excited about programming. It is an interactive tutorial where anyone can experiment with learning to code. <p> Code Maven from Crunchzilla uses Javascript. Please enable Javascript if you want to play with Code Maven. Otherwise, Code Maven will not be able to play with you. </p><p></h2> Hi, I'm Code Maven! Getting Started Lesson 1 BACK How to Play | Lesson Sections | About | FAQ | Terms of Use | Privacy | Contact | © 2015 How to Play Code Maven teaches teens and adults a little about Javascript programming! It's easy to play. Click on the Reset button if you really mess up your code and want to start over on a lesson. Code Maven saves what lesson you are on, so feel free to stop at any time and come back later. Have fun! Frequently Asked Questions What is the c in things like c.save()? c is a variable Code Maven creates for you that contains the Canvas' 2D context. var c = document.getElementById('pane').getContext('2d'); Is there any other code that is hidden from me?

Game Maven from Crunchzilla <h2>Game Maven from Crunchzilla is an interactive tutorial that lets anyone experiment with coding and write a few games.<p> Game Maven from Crunchzilla uses Javascript. Please enable Javascript if you want to play with Game Maven. Otherwise, Game Maven will not be able to play with you. </p><p></h2> We've Open-Sourced Everything - CodeCombat Blog CodeCombat is a programming game for learning to code; a multiplayer coding challenge arena for sharpening your skills; a Y-Combinator-funded startup; and as of this weekend, the largest open source CoffeeScript project and a fantastic way to get into open source and game development. Whether you’re a novice programmer wanting to figure out this GitHub thing or an open source guru looking for something to sink your teeth into, check out our GitHub and join over two hundred CodeCombat Archmages in building the best programming game ever. Yes, we just open-sourced the last year of our lives–all the code, art, and music for CodeCombat–under the MIT and Creative Commons licenses. “Wait.

Computer Coding Game No Computer Needed Superhero Activity A computer coding game is a really fun way to introduce the basic concept of computer coding to young kids. Even better if you make it a superhero computer coding game! Plus you don’t actually have to have a computer, so it’s a cool tech-free idea. This homemade coding game was pretty easy to set up and can be played with over and over again with any type of pieces. Use superheroes,LEGO, My Little Ponies, Star Wars, or whatever you have to learn a little about programming. Learn Minecraft Hour of Code Grades 2+ | Blocks Moana: Wayfinding with Code Make a Flappy game Star Wars: Building a Galaxy with Code Front Page The First Lady of the Federal Republic of Nigeria and ITU Child Online Protection Champion, Dame Patience Goodluck Jonathan celebrates the winning team of the just concluded Technovation Challenge in Nigeria. She applauded the feat of these young girls who developed a mobile app to track traffic offenders in Nigeria. The team were also presented to the European parliament(www.witin.org/tc13) on 25th of April by the Secretary General of ITU, Dr Hamadoun I.

Code Monster from Crunchzilla <h2>Code Monster gets kids excited about programming. It is a combination of a game and tutorial where kids experiment with learning to code. <p> Code Monster use Javascript. Please enable Javascript if you want the play with the Code Monster. Breaking down Amazon’s mega dropdown The hover effects on Amazon’s big ‘ole “Shop by Department” mega dropdown are super fast. Look’it how quick each submenu fills in as your mouse moves down the list: It’s instant. I got nerd sniped by this.

Programming With Blocks Syntax is a royal pain in the neck for beginning programmers. For a lot of kids learning computing or programming syntax is the single largest hurtle. It’s hard to teach both a new (programming) language and a new way of thinking and problem solving at the same time. This tends to be a big stumbling block for teaching a lot of basic computing concepts. For years there have been tools developed that remove syntax from the equation.

Codecademy Releases Its First Educational App, A.K.A. My New Subway Time Killer Although I write a lot about apps and Internet stuff, I never really learned to code. I threw the “really” in there to soften the blow, but the fact is, I straight up don’t know how to do it. I started learning at one point in middle school, but my high school didn’t push CS, and by college I spent all of my waking hours writing for the student newspaper or reading books written by dead white guys. for Schools Not at all! No coding experience and no training is required. Teachers love Tynker because the self-paced curriculum gets students started on their own. Tynker provides a rich set of resources to answer student questions, such as videos, guides, tutorials, and the very helpful Tynker Troll that provides contextual help for students. We've found that teachers can also learn alongside the students, and in a collaborative environment, students can also help and inspire each other. Tynker has lots of innovations to empower any teacher, regardless of experience, to teach programming to their students.

10 More Puzzle Websites to Sharpen Your Programming Skills My recently published Six Revision guest post, 10 Puzzle Websites to Sharpen Your Programming Skills, got a great response, hitting the front page of Hacker News, Reddit, and doing fairly well on Digg too. Lots of comments were left pointing out some sites which weren't included in my list, so I'm following up here with a list of 10 more top programming puzzle websites: 1. 15+ Ways of Teaching Every Student to Code (Even Without a Computer) According to Code.org, 90 percent of parents in the U.S. want their children to learn computer science—it will be crucial for many jobs in the near future—but only 40 percent of schools teach it. Critics claim that it is mainly the more affluent schools that offer computer science courses, thus denying those who attend poorer schools the chance to learn necessary skills. A focus on STEM is not enough: Code.org also reports that while 70 percent of new STEM jobs are in computing, only 7 percent of STEM graduates are in computer science.

Apps for Good Apps for Good is epic! It was awesome to make our own apps and I really enjoyed talking to Sophia (Expert) using Skype. I can’t wait to do more work on our app! Jonathan, Year 6 student, Raglan VC Primary School edutopia According to Code.org, 90 percent of parents in the U.S. want their children to learn computer science—it will be crucial for many jobs in the near future—but only 40 percent of schools teach it. Critics claim that it is mainly the more affluent schools that offer computer science courses, thus denying those who attend poorer schools the chance to learn necessary skills. A focus on STEM is not enough: Code.org also reports that while 70 percent of new STEM jobs are in computing, only 7 percent of STEM graduates are in computer science. It is imperative that savvy schools begin to focus some STEM resources on computer science and programming. In my opinion, parents of every student in every school at every level should demand that all students be taught how to code. They need this skill not because they’ll all go into it as a career—that isn’t realistic—but because it impacts every career in the 21st-century world.