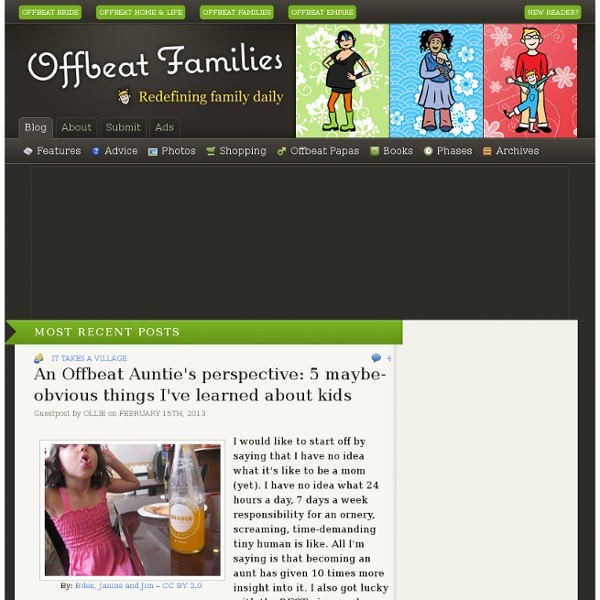 Related:  Hallmarks of Bad Parenting that are Actually Good For Kids... • Learning Games

Stuff to Blow Your Kid's Mind" NOW PLAYING ( 1 of 10 ) Stuff to Blow Your Kid's Mind Atmospheric Pressure Did you know that air has weight? Gravity Gravity is the force that holds us on the planet -- but how does it actually work? Magnets You've probably played with magnets before -- these fascinating items can exert control over another object without actually touching it. Did Alien Bacteria Seed Life on Earth? Bacteria is everywhere -- even inside your own body. Rainbows Rainbows can be achingly beautiful, but what makes that unique mix of colors spread across the sky? Salt You've seen crystals before. Scale: The Big and Small of the Solar System In this experiment, Julie and Robert use household items to show you the difference between the size of Earth in comparison to other planets. Solar Sails: Come Fly the Friendly Universe The sun is constantly bombarding our planet with solar energy, and it's possible to measure the effect of this power. Static Electricity Have you ever wondered why doorknobs occasionally shock you?

Solve Rubik's Cube 3x3 - Stage 1 Home > 3x3_guide Solving Guide This is the 2x2 version of Erno Rubik’s original Rubik’s cube. This cube is sometimes called the Pocket Cube or the Mini Cube. You might think only having 4 faces on each size makes it easy, but it’s still a challenge. Here are some videos and guides that will help you figure it out. Watch step-by-step guide on how to solve Rubik’s 2x2 cube. budget friendly tips for decorating a child’s bedroom. A few weeks ago the boys were out of town, which translates to the fact that for a solid week, the house was clean and quiet. Very very quiet. I took advantage of the week in many ways, namely: sleep. I also took photos of Charming’s bedroom, which has not been this clean since he was too little to crawl and won’t be this clean again I’m sure, until he moves out. Which I don’t want to talk about. So, without further adieu, here are my tips for decorating a child’s bedroom in budget friendly, IKEA chic. #1: Identify the assets of the area you’re decorating and find a good way to focus on them. The main focus of my son’s bedroom is his closet. I won’t go on at length to tell you about how much it bothers me that in this photo there are two shelves of red bins in a row. I got cheap organizing bins from IKEA for .99 cents to keep things under control in the closet. #2: Create a separate place for toys: Do you think we have enough books? #4: Buy inexpensive or unexpected art to frame. Allison

14 Ways to Acquire Knowledge: A Timeless Guide from 1936 Consider the knowledge you already have — the things you really know you can do. They are the things you have done over and over; practiced them so often that they became second nature. Every normal person knows how to walk and talk. Most of us quit on the first or second attempt. Any normal child, at about the age of three or four, reaches the asking period, the time when that quickly developing brain is most eager for knowledge. Those first bitter refusals to our honest questions of childhood all too often squelch our “Asking faculty.” Every person possessing knowledge is more than willing to communicate what he knows to any serious, sincere person who asks. Ask! You never learn much until you really want to learn. Desire is the foundation of all learning and you can only climb up the ladder of knowledge by desiring to learn. If you don’t desire to learn you’re either a num-skull [sic] or a “know-it-all.” You may be surprised to hear that you already know a great deal! Write!

8 Beauty Breakthrough Products That Make Life Easier Photo credit: iStock Photography Were you ever one of those girls in high school who needed over an hour to get ready? Back in '91, my Conair curling iron and I were BFFs. And while I still agree that beauty takes time, as a busy mom, time is something in short supply around my house. That is why I would like to celebrate my favorite additions to the drug store aisles over the last few years. These products have been saving my girlfriends and I a ton of time while helping us look hot. 1. For women who do not just "glow" but sweat (I personally put a field hand during harvest to shame just running errands), these effective anti-perspirant and deodorant combinations are a godsend. Try it: Dove Clinical Protection Cool Essentials $7, Secret Clinical Strength Advanced Solid $8. 2. If that clinical-strength roll-on gets white stripes on your little black dress, it will come right off with one of these nifty mistake removers. Try It: Gal Pal Deoderant Remover $9, Miss Oops Rescue Sponge $12. 3.

EMPRESS MONE'S CLOSET Florida Police Arrest Worst Son In The World AUGUST 8--A Florida man yesterday rubbed dog feces in his mother’s face during an argument in the home they share, police report. Cops arrested William Jenkins, 22, on a felony domestic battery charge for pushing his mother, 53, to the floor during the dispute, according to a Palmetto Police Department report. When questioned by cops, Jenkins denied pushing his mother, but admitted that he “did rub dog defecation on her face because she yelled at him,” investigators noted. The confrontation between Jenkins, pictured in the adjacent mug shot, was apparently prompted by his mother’s refusal to provide him with a shot of vodka. Jenkins retrieved the dog feces from the home’s back porch, where his mother’s dog had relieved itself. Jenkins is being held in the Manatee County jail, where bond has not been set. (1 page)

Raising Multilingual Children: blogging carnival : the piri-piri lexicon Welcome to the second instalment of our blogging carnival on raising multilingual children. Cordelia, aka the Multilingual Mama, did a great job last month to get us started with the new version of this blogging carnival. Her issue was full of great posts with tips and ideas. As this month's host, I thought I'd reiterate my thanks to Letizia from Bilingue per gicoco who started this amazing community. We had no theme this month as I wanted to give the opportunity to everybody to submit an article. Resources & tips Sarah from Bringing up baby Bilingual shares a brilliant idea for a card game for her son to practice his French (with a great egg carton recycling idea). Cordelia, aka the Multilingual Mama, shares how a puppet helped her daughter overcome her reluctance at speaking French at home. Jay at All this Chinoiserie (love this title), has compiled a great list of resources for Mandarin learning. Stephanie from InCultureParent gives us 5 games to try and make our children talk.

August 10: Our Latest Pet Finds - Lifestyle This content was produced by GOOD with the support of Purina ONE® beyOnd® There's nothing quite like a cute dog or cat picture to brighten your day; get your fill at GOOD Pets where we've gathered some of our favorite past pet-related content. And if that's not enough pets for you, check out the finds below from this past week of GOOD Finder, which features a collection of all things that are awesome as submitted by the GOOD community. Image via flickr (cc) user Murat Livaneli Lesnoeuds.com - La référence en matière de noeuds