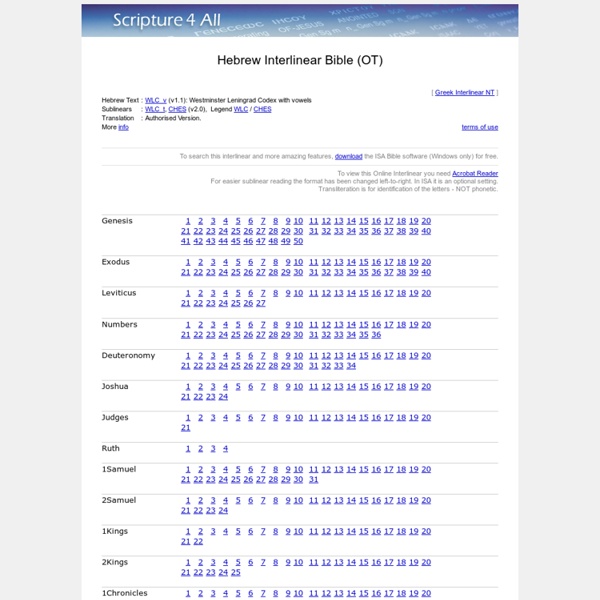 The Ancient Hebrew Alphabet - Lesson 13 Go to Lesson #...Introduction Learn to Read Biblical Hebrew - Lesson 13 Hebrew Verbs By: Jeff A. Benner Learn Hebrew Verbs - Introduction Before learning the structure of Biblical Hebrew verbs we need to understand a few grammatical terms used to describe parts of a sentence. In the phrase "Jacob cut a tree" the verb is "cut." Digitised Manuscripts Almost 900 Greek manuscripts and some of the most important papyri, ranging in date from the first to the 18th centuries, are now included in the Digitised Manuscripts site. The first two phases of the Greek Manuscripts Digitisation Project were generously funded by the Stavros Niarchos Foundation and the third phase was funded by the Stavros Niarchos Foundation, the A. G. Leventis Foundation, Sam Fogg, the Sylvia Ioannou Foundation, the Thriplow Charitable Trust, and the Friends of the British Library. A guide to the Greek Manuscripts collections, including articles, videos and collection highlights, is available here.

Study Tools "Let them praise the name of the LORD: for his name alone is excellent; his glory [is] above the earth and heaven." Psa 148:13 In the Old Testament times, a name was not only identification, but an identity as well. Academy of Ancient Languages The audio tracks below in mp3 format are courtesy of Audio Scriptures International. I have used audio editing software to divide the book files from ASI into separate chapter files. Please report broken links or any other problems to me via email.

Hebrew - English Bible by Books / Mechon-Mamre Here are direct links to recordings in Hebrew, used with permission from Talking Bibles International ℗ 1992 (to request permission to use recordings write info@talkingbibles.org); they are not chanted with a melody, but are clearly pronounced in Sephardic-style Hebrew. Some of these chapter files are large (up to almost 8MB!), so those without fast internet connections really need patience in waiting for them. Audio Bible in Hebrew Here are complete and accurate Hebrew voice recordings of every Old Testament book. They are not chanted with a melody (as in a formal synagogue service) but instead are clearly pronounced in Sephardic-style modern Hebrew so that by hearing, you may learn how to properly vocalize the words. These recordings can either be directly played using your computer’s built-in media player or they can be downloaded and saved on your computer and played from the file. Some of these chapters are quite large (up to 8 mb), so those with slower internet connections will need patience as the files may take a while to download.

Genesis 1 "In the beginning God created the heavens and the earth...." CJB View In My Bible 1 In the beginning God created the heavens and the earth. 2 The earth was unformed and void, darkness was on the face of the deep, and the Spirit of God hovered over the surface of the water. 3 Then God said, "Let there be light"; and there was light. 4 God saw that the light was good, and God divided the light from the darkness. 5 God called the light Day, and the darkness he called Night. So there was evening, and there was morning, one day. 6 God said, "Let there be a dome in the middle of the water; let it divide the water from the water." 7 God made the dome and divided the water under the dome from the water above the dome; that is how it was, 8 and God called the dome Sky. Complete Jewish Bible Copyright 1998 by David H. Stern.

Matthew English Scripture Passages from "The 1901 American Standard Version" The 1901 American Standard Version Bible (ASV) is in the public domain, and may be freely copied. TRANSLATION/PUBLICATION NOTES: ASV Verse numbering has been altered to match the corresponding verses in the original Hebrew Scriptures. "YHVH": The Name of God in the Hebrew Scriptures, "YHVH" (the Hebrew letters, 'Yud' 'He' 'Vav' 'He', aka Tetragamaton), is used instead of "Jehovah" or "JEHOVAH" in the original ASV Scriptures.

70 metal Books found in cave in Jordan could change our view of Biblical history ~ COSMOS TV LATEST NEWS For scholars of faith and history, it is a treasure trove too precious for price. This ancient collection of 70 tiny books, their lead pages bound with wire, could unlock some of the secrets of the earliest days of Christianity. Academics are divided as to their authenticity but say that if verified, they could prove as pivotal as the discovery of the Dead Sea Scrolls in 1947. On pages not much bigger than a credit card, are images, symbols and words that appear to refer to the Messiah and, possibly even, to the Crucifixion and Resurrection. Adding to the intrigue, many of the books are sealed, prompting academics to speculate they are actually the lost collection of codices mentioned in the Bible’s Book Of Revelation.

LATIN PRAYERS Sign of the Cross: In nomine Patris, et Filii, et Spiritus Sancti. Amen Handel's Messiah The most performed music and message in all of history. Salvation, Peace, Purity, Comfort, Rest, Reformation, Revolution, Spiritual Egalitarianism, Democracy, Redemption, Resurrection, Forgivness, Restoration, Atonement, Victory, Praises, Eternity, Security, Providence, Brotherhood, Worship; and if there be any other thought to elevate mankind and point to the highest and noblest ideals for the individual, be assured that here it will be found in majestic splendor, pathos and finality. ______________________ SBL Educational Resources The Society of Biblical Literature has collaborated with many organizations and individuals to develop fonts for biblical scholars. The SBL is currently developing a new series of high-quality fonts for digital and print use. This series includes SBL BibLit, which combines Greek, Hebrew, and Latin characters, including transliteration diacritics, SBL Greek, a Greek-specific font, and SBL Hebrew, a Hebrew-specific font. SBL has an FAQ page that addresses some common font difficulties, including installation.