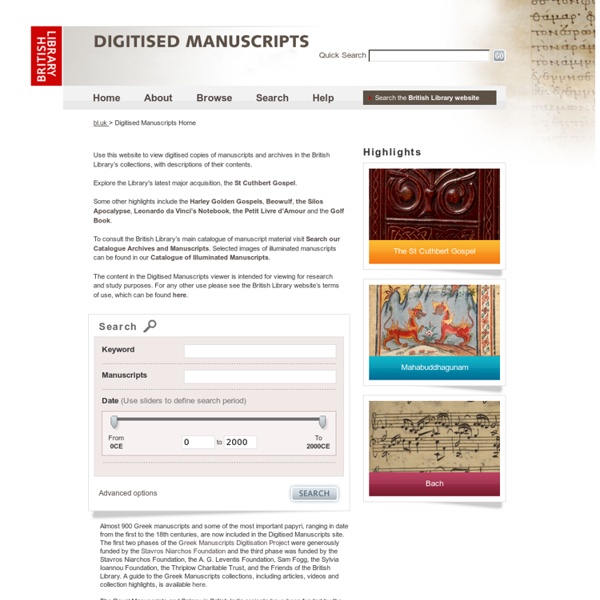 Over 600 Greek manuscripts have been digitised with the generous support of the Stavros Niarchos Foundation. Almost 500 more will be added during the third phase of the Greek manuscripts digitisation project, funded generously by the Stavros Niarchos Foundation, the A. G. Leventis Foundation, Sam Fogg, the Sylvia Ioannou Foundation and the Thriplow Charitable Trust. The Royal Manuscripts and Botany in British India projects have been funded by the Arts and Humanities Research Council as a part of its Digital Transformations in Arts and Humanities Theme and contributes to a package of measures aimed at developing innovative approaches to archiving, accessing and using data for research in the arts and humanities supported as a part of the additional investment to enhance the national e.infrastructure for research announced by the Government in October 2011. The Zweig Collection of music manuscripts was digitised with the support of the Derek Butler Trust.

Datawrapper Easy to use Upload your data, choose a chart or map and publish - done. There are options to use this tool for free and paid services for single users, teams and organizations. Learn more... Customize The travels of a manuscript: Rashid al-Din's Compendium of Chronicles (Add.7628) The Jāmiʿ al-tavārīkh or ‘Compendium of Chronicles’ is a monumental universal history composed by Rashīd al-Dīn (d. 1317) in Persian at the beginning of the 14th century. It was originally written for the Mongol Ilkhan of Iran Ghazan Khan (d. 1304) but was finally presented to his brother and successor Oljaytu Khan (d. 1317) possibly in 1307. The work acquired enormous popularity both in medieval and modern times especially for its unique description of the rise of Chinggis Khan and the Mongol Empire. There are copies of this work in all the major libraries in Europe and the Middle East, including several masterpieces of 14th century manuscript illustration. Heading in the hand of Shah Rukh’s third son Baysunghur (1397-1433). Sultan Muhammad's seal is stamped in the margin (British Library Add.7628, f. 410v)

Genesis 1 "In the beginning God created the heavens and the earth...." CJB View In My Bible 1 In the beginning God created the heavens and the earth. 2 The earth was unformed and void, darkness was on the face of the deep, and the Spirit of God hovered over the surface of the water. 3 Then God said, "Let there be light"; and there was light. 4 God saw that the light was good, and God divided the light from the darkness. 5 God called the light Day, and the darkness he called Night. So there was evening, and there was morning, one day. 6 God said, "Let there be a dome in the middle of the water; let it divide the water from the water." 7 God made the dome and divided the water under the dome from the water above the dome; that is how it was, 8 and God called the dome Sky.

15 amazing tools for online collaboration Individuals in design teams don't always work together in the same office. You may be positioned in distributed groups, or working from home, and clients can come from all over the world. This is where collaboration tools come in – they make it easier and faster for designers to get feedback and approve artwork in a professional manner, and they come in all sort of forms, from free Android apps to Chrome extensions. Here we gather together some of the best available online tools to allow designers to collaborate together in real time. Some are created specifically for designers, some serve as a concept crafting whiteboard, and we've also included some more full-on project management tools for when you need to take your collaborative project to the next level. 01.

Oxford’s online Bodleian archive: illumination for all I’ve got a secret vice. I love to visit rare book rooms and leaf through the pages of 16th-century traveller’s tales or 15th-century editions of Petrarch with their brilliantly coloured pictures. Once, I even found a design by Botticelli in a religious tract in the British Library. This is not actually as criminal or difficult as it sounds. 70 metal Books found in cave in Jordan could change our view of Biblical history ~ COSMOS TV LATEST NEWS For scholars of faith and history, it is a treasure trove too precious for price. This ancient collection of 70 tiny books, their lead pages bound with wire, could unlock some of the secrets of the earliest days of Christianity. Academics are divided as to their authenticity but say that if verified, they could prove as pivotal as the discovery of the Dead Sea Scrolls in 1947.

RDFa Distiller and Parser This distiller corresponds to the RDFa 1.0 specification. In 2012, W3C has published an updated version of that specification, called RDFa Core 1.1. A new distiller, processing RDFa 1.1 content, has been implemented which suprecedes this one. Note that the new distiller can also process RDFa 1.0 content (there are some minor incompatibilities) if the XHTML+RDFa file uses the right (RDFa 1.0) DTD and/or the @version attribute. Users are advised to migrate to RDFa 1.1 in general, including the RDFa 1.1 distiller.

how to destroy special collections with social media I just got back from a wonderful trip to Rare Book School to deliver a talk in their 2015 lecture series. It was the last week of their summer season in Charlottesville, the week when the Descriptive Bibliography course (aka “boot camp”) was in full swing, and the weather was in all its hot, glorious humidity. I wanted to keep things light as well as make some points I feel very strongly about: the importance of librarians and researchers using social media to help sustain special collections libraries. Below are the slides and my notes for my July 29th talk. Since RBS records and shares the audio of their talks (go browse through past RBS lectures and listen!)

Happy Uncommon Musical Instrument Appreciation Day! As we are sure you are all aware, today is Uncommon Musical Instrument Appreciation Day, the day on which we are urged to take time to think about the rare and unusual instruments that have gone obsolete, or are otherwise beyond our ken. We would like to offer a number of examples in the spirit of this momentous occasion - the familiar, the forgotten and the simply odd. Please be sure to send any other gems you might encounter to us on Twitter @BLMedieval. Without any further ado: Folio with musical instruments, from a leaf from a giant Bible, Italy, 11th-12th century, Add MS 47683, f. 1v

SBL Educational Resources The Society of Biblical Literature has collaborated with many organizations and individuals to develop fonts for biblical scholars. The SBL is currently developing a new series of high-quality fonts for digital and print use. This series includes SBL BibLit, which combines Greek, Hebrew, and Latin characters, including transliteration diacritics, SBL Greek, a Greek-specific font, and SBL Hebrew, a Hebrew-specific font. SBL has an FAQ page that addresses some common font difficulties, including installation. If you cannot find an answer there you can either post a question on the forum or e-mail font support. While we welcome your questions, please consult the FAQ before emailing.