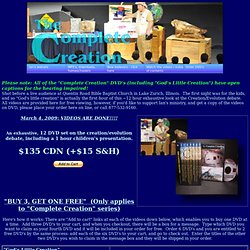 Shot before a live audience at Quentin Road Bible Baptist Church in Lake Zurich, Illinois. The first night was for the kids, and so "God's little creation" is actually the first hour of this ~12 hour exhaustive look at the Creation/Evolution debate. All videos are provided here for free viewing, however, if you'd like to support Ian's ministry, and get a copy of the videos on DVD, please place your order here on line, or call 877-532-9160. March 4, 2009: VIDEOS ARE DONE!!!! An exhaustive, 12 DVD set on the creation/evolution debate, including a 1 hour children's presentation. "BUY 3, GET ONE FREE" (Only applies to "Complete Creation" series) Here's how it works: There are "Add to cart" links at each of the videos down below, which enables you to buy one DVD at a time.

Mystery of Noah's Flood - teaser. Flood Legends From Around the World. Native global flood stories are documented as history or legend in almost every region on earth. 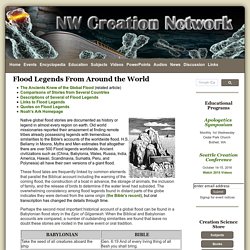 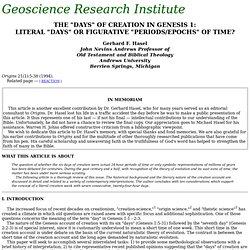 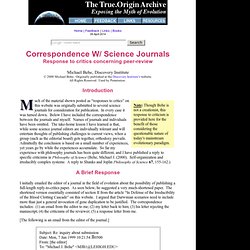 In the section "Meaning of explanation," the author harps on the extreme difficulty of elucidating complicated cellular interaction systems and of tracing the evolution of biological complexity. It is ironic that he should voice his concerns just as technical as well as conceptual progress has opened the door to investigating on a much larger scale than heretofore the mechanisms of development, and the increase in gene interaction complexity along certain lines of descent. Michael Behe is depicting a hopeless situation for the biological sciences, or at least for their evolutionary aspects, just as biology is proceeding through a glorious age.

Ryder MacKay Debate. "Chemistry, Creation, and Chirality" by: Christina Harris. Halos. The Biblical Timeline. Sabbath Truth > Home. Which Day Is the Sabbath. What is the Sabbath? 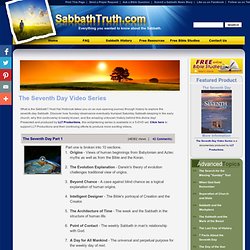 Host Hal Holbrook takes you on an eye-opening journey through history to explore the seventh-day Sabbath. Discover how Sunday observance eventually trumped Saturday Sabbath-keeping in the early church, why this controversy is barely known, and the amazing unknown history behind this divine day! Presented and produced by LLT Productions, this enlightening series is available in a 5-DVD set. Click here to support LLT Productions and their continuing efforts to produce more exciting videos. Browse Media - Medium Quality. 101 - The Earth In Time And Space. 102 - A Universal Flood. 103 - Bones In Stones. 104 - Where Mammals Reigned. 105 - The Genes Of Genesis. 106 - Creation To Restoration. 107 - A Day To Be Remembered. 108 - A Spade Unearths The Truth. Fossil Record Secrets. Confessions of Evolution. Every thinking person today must confess that there are tremendous mysteries about man and nature which baffle the keenest intellects. 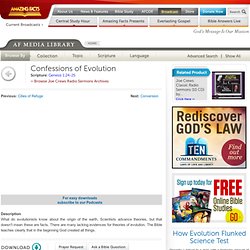 Evolution - Part 1. I believe most of us know that Protestantism is not making the progress it did in earlier days. 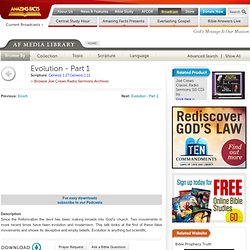 There has been a strange lessening of enthusiasm for Reformation principles. Issues which were once so very, very clear have now been clouded by modern Protestant theology and interpretation. In fact, the historic principle of the Bible and the Bible only is now being questioned as the real source of emphasis for Protestantism today. Evolution - Part 2. In our last broadcast we introduced the subject of evolution. We are going to continue that strange subject, I say "strange" because it has been accorded a status of scientific fact when actually it's only a theory. Right here I would like to introduce two arguments of the evolutionists based on geology and biology. Now I have no argument with these sciences, friends, because there is true science. Biology is a wonderful science and so is geology. But I object to taking facts and perverting them into theoretical fancy as sometimes has been done in the name of these sciences.

Evolution and Nature - Part 3. We continue today our fascinating study about the intelligent design of created things which proves the existence of a divine Creator. One of the mysteries of nature was described in the Bible long before it was investigated by science. Let's read about it now in Job 38:8-11. "Or who shut up the sea with doors, when it brake forth, as if it had issued out of the womb? When I made the cloud the garment thereof, and thick darkness a swaddlingband for it, And brake up for it my decreed place, and set bars and doors, And said, Hitherto shalt thou come, but no further: and here shall thy proud waves be stayed?

" What beautiful poetic language we find here to describe the creation of the ocean! By the way, these tidal movements have been in perfect balance to contribute to man's comfort. Evolution - Part 4. One of the greatest forces working against true religion today, is the growing strength of humanism. 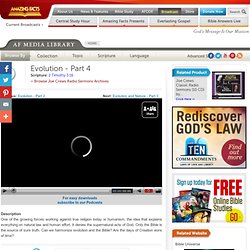 In simple language, this is the doctrine which seeks to explain everything on the basis of natural law and human effort. It denies the supernatural acts of God as far as both material and spiritual worlds are concerned. Perhaps this doctrine could be expected from materialistic scientists who insist on laboratory proof for all it's propositions. But, friends, we are facing a world of religion which is largely turning away from the Biblical concept of God as Creator, Sustainer and Saviour. Evolution and the Body - Part 1. Today we want to look at one of the most fascinating evidences of creation as opposed to evolution.

In no other area is so much heated conviction and dogmatism revealed. Now the reason for this is because we're dealing with a doctrine that cannot be proven scientifically, or by any of the commonly applied laboratory methods. After all, no one was here when the earth was made and when life was first created. Our belief in this matter must be based on faith. Evolution and the Body - Part 2. Then think about the lungs of the human system. Every hour that we're at rest they carry in and out of the body 1500 gallons of air. That will increase by 20 times if there is strenuous exercise of an individual. There are air passages, of course, from the nose to the lungs to carry these gallons of air, and these passages are lined with cells which have tiny hair-like processes. These little hairs are always waving and by their motion they carry out any debris that might try to get into the lungs.

In other words, the air we breathe is actually air conditioned before it gets into our bodies. How Evolution Flunked Science - Part 1. Recently I talked to a man with a fantastic amount of faith. 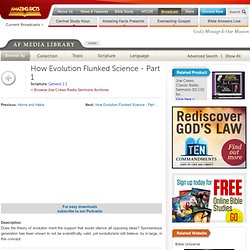 Not one shade of doubt crept into his animated description of man's origin and destiny. He was an evolutionist I met on an airplane. How Evolution Flunked Science - Part 2. Professor G. G. Simpson, one of the elite spokesmen for evolution, writes about multiple, simultaneous mutations and reports that the mathematical likelihood of getting good evolutionary results would occur only once in 274 billion years! And that would be assuming 100 million individuals are reproducing a new generation Every Day!

The Challenge of Evolution. How Evolution Flunked Science Test. Introduction. 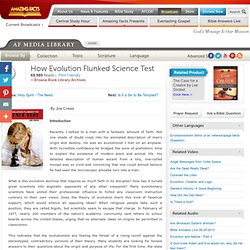 Evolution/When the Rocks Cry Out. Evolution, Creation and Logic. Creation or Evolution. Amazing Wonders of Creation. God's Handiwork In spite of being marred by transgression, nature still bears an eloquent testimony to the love and power of a Divine Creator. After resting under the heavy curses of sin for almost 6,000 years, the incredible beauty of God's handiwork continues to amaze and enthrall. When we thank God for our blessings, we should never forget to mention these incomparable natural wonders that add so much meaning to every moment of our lives. What would this planet be like without its restful carpet of living green grass and foliage?

God did not have to clothe the ugly, bare soil with such a covering. Genesis History: Creation or Coincidence? When the Rocks Cry Out.