Twitter. - Checking translations of Holy Scripture. It's important to know where a translation of scripture might be untrustworthy or obscure the meaning of the original Greek texts. 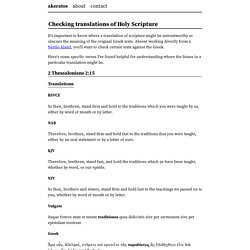 Absent working directly from a Nestle-Aland, you'll want to check certain texts against the Greek. Here's some specific verses I've found helpful for understanding where the biases in a particular translation might be. Translations So then, brethren, stand firm and hold to the traditions which you were taught by us, either by word of mouth or by letter. Therefore, brothers, stand firm and hold fast to the traditions that you were taught, either by an oral statement or by a letter of ours. Therefore, brethren, stand fast, and hold the traditions which ye have been taught, whether by word, or our epistle. So then, brothers and sisters, stand firm and hold fast to the teachings we passed on to you, whether by word of mouth or by letter. Vulgate itaque fratres state et tenete traditiones quas didicistis sive per sermonem sive per epistulam nostram. Genesis 4:7 Commentaries: "If you do well, will not your countenance be lifted up? And if you do not do well, sin is crouching at the door; and its desire is for you, but you must master it."

—This most difficult verse is capable of a satisfactory interpretation, provided that we refuse to admit into this ancient narrative the ideas of a subsequent age. 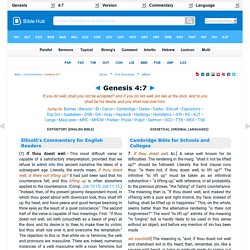 Literally, the words mean, is often elsewhere applied to the countenance. About the Online-Bibles. Twitter. Isaac T. Soon sur Twitter : "A short thread about “dogs” in Phil 3:2 and their domestication. In this well-known passage, Paul warns the Philippians about a certain group of people whom he labels with the epithets “dogs”, “the slashing,” and “evil workers. Interesting...The resurrection really happened: textual criticism and Easter — Southern Equip. Eva Mroczek sur Twitter : "Why were the gospels written at all? Great new book by @chriskeith7 is out for some quarantine reading. Congratulations to Chris - not only a model scholar, but a pretty great human being too. Read his book!…

2)... punishment of a known sinner—is traceable to the Historical Jesus, and thus a first-century investigative background would seem proper.“ Photo source. Dr. Sarah Bond sur Twitter : "February 8, 553: The emperor Justinian rules (De Hebraeis, Novel 146) that the Jewish people now be allowed to read the Hebrew Bible in Greek––or other languages. The Torah could be read in Greek, preferably the Septuagint & Textual Encounters – A Blog about Scholarship on Early Christianity and Ancient Judaism. Are Same-Sex Relations Condemned in the Old Testament? – The Bart Ehrman Blog. When people want to show that the Bible condemns same-sex relations – either to justify depriving LGBTQ people of civil rights, to condemn them morally, to preclude them from serving in church offices, or even to participate at all in faith communities (or for any other reason) – there are a few passages that typically get cited, usually with vigor. 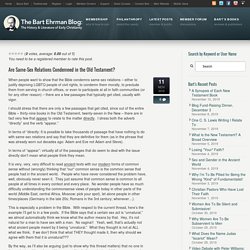 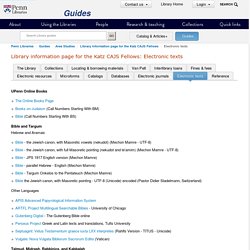 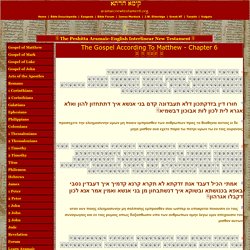 Peshitta. The Peshitta (Classical Syriac: ܦܫܝܛܬܐ‎ pšîṭtâ) is the standard version of the Bible for churches in the Syriac tradition. 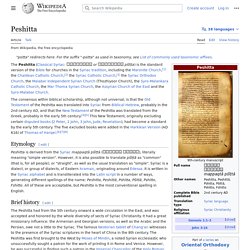 Etymology[edit] The name 'Peshitta' is derived from the Syriac mappaqtâ pšîṭtâ (ܡܦܩܬܐ ܦܫܝܛܬܐ), literally meaning 'simple version'. However, it is also possible to translate pšîṭtâ as 'common' (that is, for all people), or 'straight', as well as the usual translation as 'simple'. Syriac is a dialect, or group of dialects, of Eastern Aramaic, originating around Edessa. Why does Jesus say, “Amen, Amen, I tell you”? In most recent English translations of the Gospels Jesus frequently says, “Truly I say to you” or “I tell you the truth.” 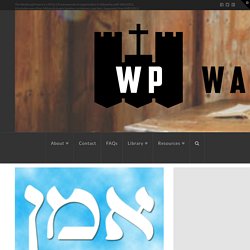 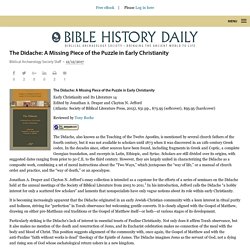 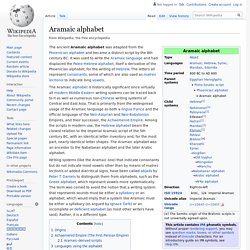 It was used to write the Aramaic language and had displaced the Paleo-Hebrew alphabet, itself a derivative of the Phoenician alphabet, for the writing of Hebrew. The letters all represent consonants, some of which are also used as matres lectionis to indicate long vowels. The Aramaic alphabet is historically significant since virtually all modern Middle Eastern writing systems can be traced back to it as well as numerous non-Chinese writing systems of Central and East Asia. Peshitta Aramaic/English Interlinear New Testament. The Murderous History of Bible Translations: Power, Conflict and the Quest ... - Harry Freedman. What about the Majority Text? By Michael D. 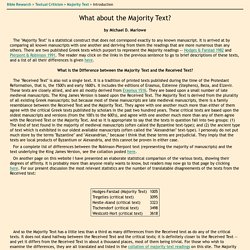 Marlowe The "Majority Text" is a statistical construct that does not correspond exactly to any known manuscript. It is arrived at by comparing all known manuscripts with one another and deriving from them the readings that are more numerous than any others. There are two published Greek texts which purport to represent the Majority readings -- Hodges & Farstad 1982 and Pierpont & Robinson 1991. The reader may click on the links in the previous sentence to go to brief descriptions of these texts, and a list of all their differences is given here. Greek New Testament - New Internet Edition With Critical Apparatus (Editio Internet Critica Maior) Encyclopedia of New Testament Textual Criticism.

Most of the variations are not significant and some common alterations include the deletion, rearrangement, repetition, or replacement of one or more words when the copyist's eye returns to a similar word in the wrong location of the original text. If their eye skips to an earlier word, they may create a repetition (error of dittography). If their eye skips to a later word, they may create an omission resort to performing a slight rearranging of words to retain the overall meaning without compromising the context.

Benner Learn Hebrew Verbs - Introduction. Introduction to Hebrew Verbs. Academy of Ancient Languages. The audio tracks below in mp3 format are courtesy of Audio Scriptures International. I have used audio editing software to divide the book files from ASI into separate chapter files. Please report broken links or any other problems to me via email. Hebrew - English Bible by Books / Mechon-Mamre. Here are direct links to recordings in Hebrew, used with permission from Talking Bibles International ℗ 1992 (to request permission to use recordings write info@talkingbibles.org); they are not chanted with a melody, but are clearly pronounced in Sephardic-style Hebrew. Some of these chapter files are large (up to almost 8MB!) , so those without fast internet connections really need patience in waiting for them.