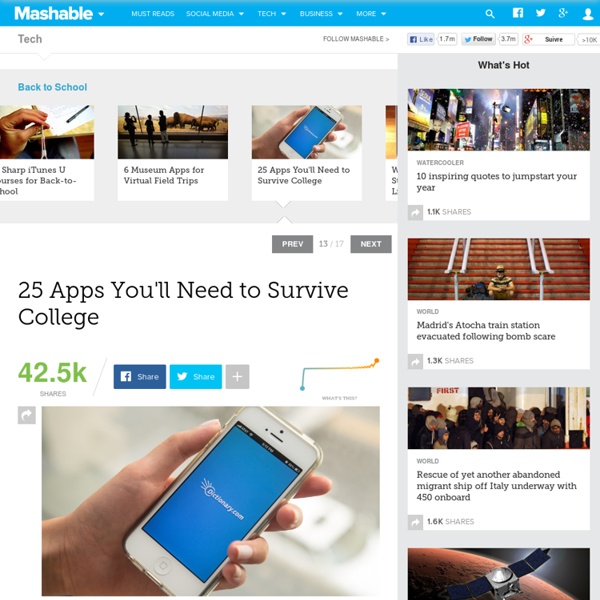 College isn't all fun and games (unless you want it to be.) Don't sweat it, though. Take a look at these 25 apps — they'll give you a smoother college experience by helping you study smarter, connect with new people and wake up in time for your early lectures. Your university probably has its own app, too — download it. Any helpful ones we missed? 1. Image: BenchPrep BenchPrep is an interactive course library with all the graduate and professional exam study material you can handle. Available for free on iOS and Android devices. 2. iStudiez Pro Image: iStudentPro iStudiezPro keeps track of your deadlines, grades and more across all Mac devices — all you need to do is plug your class schedule into the app. Available for $2.99 for iOS. 3. You've probably heard a lot about Evernote, and yes, you should try it. If you're feeling overwhelmed by Evernote's many features, check out this comprehensive beginner's guide. Available for broke college students (read: free) for iOS and Android devices.

6 Famous Documentaries That Were Shockingly Full of Crap #3. Searching for Sugar Man -- Sugar Man Was Touring, Shooting Up the Charts in the '80s Comstock/Comstock/Getty Images The Film: Searching for Sugar Man is the tale of two South African music fans going on a quest to find a mysterious American singer called Rodriguez, who had become huge in their country but whose whereabouts were unknown. Spoilers: The documentary discovers Rodriguez toiling in anonymity in his native Detroit, having no idea of his superstar status abroad. Via Michael Robinson"Wait, he didn't kill himself? The Fallacy: The documentary tells us that Rodriguez is a guy who put out two extremely obscure albums in the '70s, had zero success, quit music, and became a regular Joe. Andy Kropa/Getty Images Entertainment/Getty Images He still has fucking "Down Under" stuck in his head. Yep, Rodriguez was a huge sensation in Australia in the late '70s and early '80s, with his singles shooting up the charts for over a year. #2. Jupiterimages/Photos.com/Getty Images #1.

What the U.S. Can Learn from the Dutch About Teen Sex The Dutch are known for their liberal attitudes toward sex and drugs: while not officially legal, marijuana use and sale in “coffee shops” is tolerated in The Netherlands, as is prostitution, most notoriously in the street windows of Amsterdam’s red light district. Pragmatism, the Dutch have long believed, is better than punitive prohibition — and they’ve got lots of data on their side.While 12% of the American population has smoked marijuana in the last month, for example, the same is true of only 5% of citizens of The Netherlands. (More on Time.com: 5 Little-Known Truths About American Sex Lives) As Salon reports, this practical attitude — and data favoring it — extends to teenage sex. But rather than resulting in crazed teen orgies and high rates of teen pregnancy, abortion or transmission of STDs, the Dutch have far lower rates of these problems than the U.S. Dutch parents, by contrast, downplay the dangerous and difficult sides of teenage sexuality, tending to normalize it.

The Truth About the Hookup Culture Among College Students Recent claims about the hookup culture among college students are greatly exaggerated, it seems. Despite racy headlines suggesting that college kids are increasingly choosing casual liaisons over serious relationships, a new study presented at the annual meeting of the American Sociological Association finds that just under one-third of college students have had more than one partner in the past year. And that’s exactly the same proportion of students who were surveyed between 1988 and ’96, and between 2002 and ’10; both groups also had the same number of partners. So kids aren’t hooking up more than they ever were, or even more than their parents did, which is what recent media coverage has implied. “College students today are not having more sexual partners [after] age 18, more sexual partners over the last year or more sex than their parents,” says the study’s lead author Martin Monto, professor of sociology at the University of Portland in Oregon. (MORE: What the U.S.

11 Convenient Sites for Cheap Textbooks Sorry to bum you out, students, but summer is almost over — and that means you’ll have to go back to school and once again function like a normal human being. You'll have to shower regularly, do your own laundry, re-memorize that student ID number and, of course, buy your textbooks for the upcoming semester. We know that textbook prices just add insult to the injury of school tuition, but we’ve rounded up 11 websites to help take the edge off that financial hurt. Whether you plan on renting or buying, here’s where you’ll find the best deals. With comparison shopping, rental time adjustments and other special features, you'll definitely discover an option that fits your preferences. Do you have a go-to site for buying textbooks online that didn't make our list? Image: Flickr, LifeSupercharger

5 Most Overrated Exercises You Can Stop Doing You’re a busy person, right? You want your time at the gym to be well spent, not wasted on exercises that won’t get you anywhere in terms of fitness or strength. Unfortunately, there’s a lot of misinformation out there, and that’s resulted in many of us using precious gym time doing things that are either totally useless or not as result-spurring as other options. Read on to find out which five overrated exercises you can cut from your gym routine. Abdominal and Side Plank These core-focused exercises certainly have their uses for beginners: abdominal and side planks help strengthen core muscles and improve overall stability. But because these are static bodyweight exercises (as in, you’re holding one position rather than flexing and unflexing your muscles), they quickly lose their potency once you reach a certain strength level, and then you’re pretty much just hanging out. Ultimately, once you can hold the plank or any other variation for 60 seconds or more it’s time to change. Join Us!

10 Sharp iTunes U Courses for Back-to-School As the summer ends and the back-to-school sales start haunting your shopping centers, ease into the academic season with some free educational podcasts. The iTunes U app gives you access to courses from universities and learning centers around the world, ranging from Stanford to Yale to MoMA to the New York Public Library. According to its website, iTunes U is the largest database of educational material on the web. If every display of school supplies you see makes you nostalgic for your grade school or college years, iTunes U may fill your thirst for the classroom. Here are our picks for the 10 best courses from the iTunes U education arsenal. 1. The Ohio State University's intro to Calculus course is extremely easy to follow and is an exceptional course for Calculus beginners. 2. Exploring the Past is an educational video series by National Geographic that follows scientists and historians as they travel around the world. 3. 4. 5. 6. 7. 8. 9. 10. Image: Flickr, Peter Gene

What Every College Student Should Post on LinkedIn Are you waiting until after graduation to start building up your LinkedIn profile? It's time to reconsider. "Every student is blindly trying to make a resume, but surprisingly many don't have great LinkedIn profiles," says Natan Edelsburg, senior vice president at Sawhorse Media. "I often hear, 'Here's my resume. Thirty-seven percent of surveyed job recruiters identified social professional networks as one of the most important sources for hiring. Still not convinced? "Employers are looking for recent graduates," says Nicole Williams, LinkedIn's Career Expert and the founder of WORKS by Nicole Williams, a lifestyle brand for young, career-driven women. But how do you actually build a great LinkedIn profile as a college student? Post a profile photo. Some college students are wary of including their profile pictures on LinkedIn for fear of looking too young. Include coursework and extracurriculars. Show off your schoolwork. Ask professors and advisers for recommendations.

How Breaking Bad broke free of the clockwork-universe problem | Breaking Bad Week | For Our Consideration Late in Breaking Bad’s upcoming season-five part-two première, Walter White makes a leap of logic that seems somewhat ridiculous for the man to make. He has very little evidence to support it. He has no particular reason to feel the way he does—outside of one thing he should never have noticed. But it feels right for him to have made this leap of logic, at least to the audience. If my colleague Donna Bowman places the strength of the series squarely in the tradition of Greek tragedy—of the sense that there are powerful systems at work that catch up the people of the series’ fictional Albuquerque and grind them up—then I would look a little further along in the history of drama. One of Breaking Bad’s greatest strengths is something that has been the greatest weakness of almost every other show that has attempted such a thing: It takes place in a clockwork universe. For the most part, clockwork-universe storytelling works best in works of finite length.

Beautiful Pathologies Private Lives: Personal essays on the news of the world and the news of our lives. At our medical school, we have something called the organ transplant observation program, which allows students to shadow the doctors who transfer functional organs from deceased or living donors into the bodies of dying patients. It’s pretty great. When it’s your turn, you might go to a nearby hospital and watch surgeons put in a heart, or hop on a private plane and fly to another state to get a kidney. Getting through the red tape required to allow inexperienced first- and second-year medical students to observe these lifesaving operations always takes several months. Jonathon Rosen We were sitting in a pathology lecture on the differences between benign and malignant cell growth. The entire class erupted in applause and started cheering his name. “Do you think he’ll get to fly somewhere?” “I hope he gets to scrub in!” Watching all of this, our instructor searched the audience for an explanation.