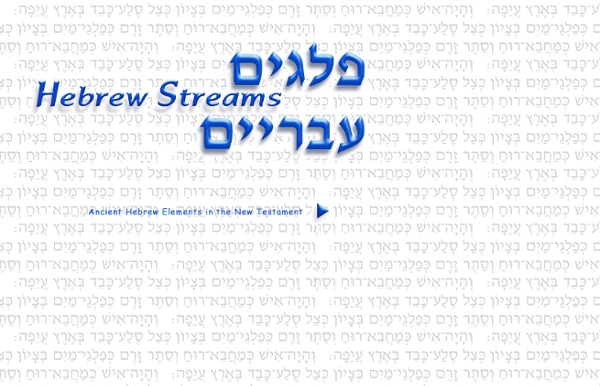 Biblical Hebrew self-study/tutored courses, audio, books, tapes, MP3, software, lexicons, grammars, resources Hebrew for Christians - Learn Hebrew for FREE! Teach Me Hebrew [With Book] - Judy Mahoney Hebrew Glossary Then name Ashkenaz (Bereishit 10:3) has since the 10th century been identified with Germany. As the German and French Jews of the medieval period formed a uniform group in culture and religious customs, they were all referred to as Ashkenazim in contradistinction to the Sefardim or Spanish- Portuguese Jews. Ashkenazim are the people who use Nusach Ashkenaz, the prayer arrangement adopted by the medieval Franco-German Jews, including certain variations described as belonging to the Polish custom (Minhag Polin). In the 18th century, the Chasidic movement adopted the Sefardic arrangement of prayers; hence, the Chasidim have been called Sefardim on many occasions. The Ashkenazim in Eastern Europe developed an intense religious life, disseminating Talmudic scholarship among the people to a degree never before surpassed in Jewish history. Chasidim and Mithnaggedim and followers of the Haskalah movement (Maskilim) presented a changing pattern of types, trends and ideologies.

Hebrew Alphabet For Dummies You can learn to read Hebrew in a few days - real newspaper Hebrew, street signs etc. No kidding! The entire Hebrew alphabet (with "final" forms of letters): א ב ג ד ה ו ז ח ט י כ ך ל מ םנ ן ס ע פ ף צ ץ ק ר ש ת Follow this mini course and you will learn how to read and sound every letter. Bonus 1: You will understand what you are reading! Bonus 2: You can even learn to write in script if you like! Bonus 3: It's all free, right here. Hebrew Pronunciation and Transliteration gives details of all the letters if you must know now. This mini-course is divided into seven lessons that teach you to read the entire alphabet, and advanced vocabulary and practice lessons that can be studied either along with each lesson or as an additional review and vocabulary expansion after you are done learning the letters. And right away - you can be READING and talking and writing modern HEBREW! The first easy letters (script version on the left, block print version on the right): - Ahleph.

Learn Hebrew Pod - Online Conversational Course by Audio Lessons and Podcasts Learn how to speak Hebrew - Ma Kore Hebrew Language, Grammar Pronunciation-Transliteration (adapted from ) The complete original document can be obtained from the American National Standards Institute (ANSI) For the ISO standard for binary representation of Hebrew, see ISO- 8859-8. Blue letters are printed, red letters are for handwritten script. Note 29.11.98: draft ISO standard column added (based on article) in Ha'aretz weekend supplement, 27.11.98). The apostrophe ( ' ) when added to the letters gimel, zayin, and tzadik, produces three new letters which are used in modern Hebrew to represent foreign sounds (in words borrowed from French, English, Russian, ...) that do not exist in Biblical Hebrew. The standard pronunciation of modern Hebrew is a simplified version of the Sephardi pronunciation: in particular, the kaf-kuf, chet-chaf, and tet-tav pairs are pronounced identically and the alef and ayin are both silent vowel stops. t is transliterated as tet (e.g. universita), th is tav (theorema), w is vav vav Possessives: