Ancient Origins. Bad Archaelogy. Canaan Conquest. Click to Expand After wandering in the wilderness for 40 years, Moses handed over leadership to Joshua, whose responsibility it was to bring the nation of Israel into the promised land of Canaan. 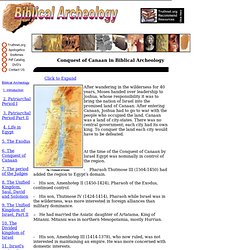 After entering Canaan, Joshua had to go to war with the people who occupied the land. Canaan was a land of city-states. There was no central gov­ernment; each city had its own king. To conquer the land each city would have to be defeated. At the time of the Conquest of Canaan by Israel Egypt was nominally in control of the region. - Pharaoh Thutmose III (1504-1450) had added the region to Egypt’s domain. - His son, Amenho­tep II (1450-1424), Pharaoh of the Exodus, continued control. - His son, Thutmose IV (1424-1414), Pharaoh while Israel was in the wilderness, was more interested in foreign alliances than military dominance. o He had married the Asiatic daughter of Artatama, King of Mitanni.

. - His son, Amenhotep III (1414-1378), who now ruled, was not interested in maintaining an empire. Gilgal. Graham Hancock. All photographic images are copyright © 1999 Santha Faiia. 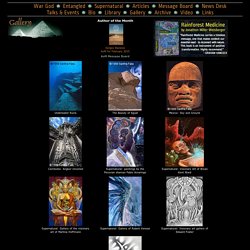 None of the images may be reproduced without the prior written permission of the copyright holder. Site design by Amazing Internet Ltd, maintenance by Synchronicity. G+. Site privacy policy. Contact us. Dedicated Servers and Cloud Servers by Gigenet. Egyptian Period. - The most important mention of Israel outside the Bible is that in the Merneptah Stela (fig. 4). 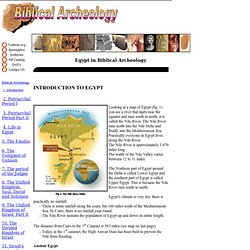 Discovered in 1896 in Merneptah’s mortuary temple in Thebes by Flinders Petrie, the stela is a eulogy to pharaoh Merneptah, who ruled Egypt after Rameses the Great, c. 1236-1223 BC. - Of significance to Biblical studies is a short section at the end of the poem describing a campaign to Canaan by Merneptah in the first few years of his reign. One line mentions Israel: “Israel is laid waste, its seed is not.” Here we have the earliest mention of Israel outside the Bible and the only mention of Israel in Egyptian records. - This puts Israel as a nation right after the conquest of Canaan by Joshua (1406 BC). Joseph The biblical account in Egypt begins with Joseph. If the Biblical numbers are taken literally the kings during the enslavement and rise to power of Joseph would be Senusret II, fig. 5, (1894-1878 BC) and Senusret III (1878-1841 BC), of the 12th Dynasty. Sold Into Egypt (Genesis 37) 1. Exodus Period. According to Exodus 7:7 Moses was 80 years old when he spoke to Pharaoh. 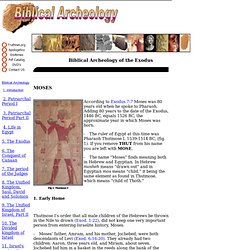 Adding 80 years to the date of the Exodus, 1446 BC, equals 1526 BC, the approximate year in which Moses was born. - The ruler of Egypt at this time was Pharaoh Thutmose I, 1539-1514 BC, (fig. 1). If you remove THUT from his name you are left with MOSE. - The name “Moses” finds meaning both in Hebrew and Egyptian. In Hebrew mosheh means “drawn out” and in Egyptian mos means “child,” it being the same element as found in Thutmose, which means “child of Thoth.” 1. Thutmose I’s order that all male children of the Hebrews be thrown in the Nile to drown (Exod. 1:22), did not keep one very important person from entering Israelite history, Moses. - Moses’ father, Amram, and his mother, Jochebed, were both descendants of Levi (Exod. 6:16-20). Introduction to BA. Introduction to Biblical Archeology GE 24:10 Then the servant took ten camels from the camels of his master, and set out with a variety of good things of his master’s in his hand; and he arose and went to Mesopotamia, to the city of Nahor. 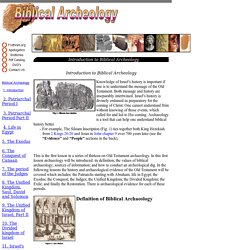 GE 24:11 He made the camels kneel down outside the city by the well of water at evening time, the time when women go out to draw water. GE 24:12 He said, “ O LORD, the God of my master Abraham, please grant me success today, and show lovingkindness to my master Abraham. GE 24:13 “Behold, I am standing by the spring, and the daughters of the men of the city are coming out to draw water; GE 24:14 now may it be that the girl to whom I say, ‘Please let down your jar so that I may drink,’ and who answers, ‘Drink, and I will water your camels also’—may she be the one whom You have appointed for Your servant Isaac; and by this I will know that You have shown lovingkindness to my master.”