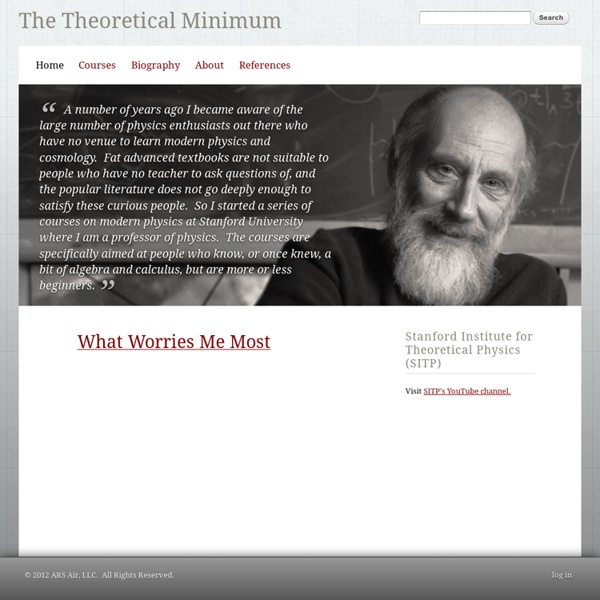 Physics Homework Help, Physics Help, Physics Tutors Free Web Development Courses | The Odin Project This course is for anyone who is either starting from scratch or who isn't entirely comfortable with their understanding of the command line, HTML, CSS, Javascript, Ruby, web frameworks, Git, or other foundational technologies and practices of web development. We cover a LOT of ground -- by the end of this comprehensive course, you'll be well prepared to take on our deep dive courses or explore further on your own. You Will Learn Special Relativity and Electrodynamics (Spring, 2012) 1 The Lorentz transformation In the first lecture of the course Professor Susskind introduces the original principle of relativity - also known as Galilean Invariance - and discusses inertial reference frames and simultaneity. He then derives the Lorentz transformation of... [more] 2 Adding velocities Professor Susskind starts with a brief review of the Lorentz transformation, and moves on to derive the relativistic velocity addition formula. He then discusses invariant intervals, proper-time and distance, and light cones. Note: this is only a 1...

Backreaction Home | Practical Physics This website is for teachers of physics in schools and colleges. It is a collection of experiments that demonstrate a wide range of physical concepts and processes. Some of the experiments can be used as starting-points for investigations or for enhancement activities. Physics is a practical science. Good quality, appropriate physics experiments and investigations are the key to enhanced learning, and clarification and consolidation of theory. We have published a new set of resources to support the teaching of practical science for Key Stages 3-5.

Teach Yourself Logic: A Study Guide, and other book notes Most philosophy departments, and many maths departments too, teach little or no serious logic, despite the centrality of the subject. Many students will therefore need to teach themselves, either solo or by organizing study groups. But what to read? Students need annotated reading lists for self-study, giving advice about the available texts. The main Guide and its Appendix are in PDF form, designed for on-screen reading. Teach Yourself Logic 2105: A Study Guide (PDF, iv + 94 pp.) If the Guide’s length makes it sound daunting, there are also some supplementary webpages which might help ease your way in: About the Guide Is the Guide for you? And here are some additional webpages: It goes without saying, of course, that all constructive comments and suggestions continue to be most warmly welcomed.

General Relativity (Fall, 2012) 1 The equivalence principle and tensor analysis The principle of equivalence of gravity and acceleration, or gravitational and inertial mass is the fundamental basis of general relativity. This was Einstein's key insight. Professor Susskind begins the first lecture of the course with Einstein'...

Not Even Wrong Graham Farmelo has posted a very interesting interview he did with Witten last year, as part of his promotion of his forthcoming book The Universe Speaks in Numbers. One surprising thing I learned from the interview is that Witten learned Calculus when he was 11 (this would have been 1962). He quite liked that, but then lost interest in math for many years, since no one gave him more advanced material to study. If only back in 1962 someone had told Witten about linear algebra and quantum mechanics, the entire history of the subject could have been quite different. A lesson for all parents: if your child is an off-the-scale genius, learning Calculus at age 11, don’t even think about trying to give them a normal childhood. I did though find some of the later parts of the interview quite depressing. Looking to the near future, he’s most optimistic about the “It from Qubit” business. Update: As explained in the comments, the advice to parents was not meant to be taken seriously.

PhysicsCentral: Learn How Your World Works Top Free eBooks Cosmology (Winter, 2013) 1 The expanding (Newtonian) universe Professor Susskind introduces the topic of modern Cosmology, which started with the discovery of cosmic microwave background radiation in 1964. However, this lecture focuses on the classical or Newtonian view of the universe. Beginning with the... [more] 2 Matter and radiation dominated universes After reviewing the basic equation for an expanding universe, Professor Susskind solves the equation explicitly for a zero energy universe, and then extends the derivation to universes with non-zero energy. These universes can take two forms:... [more] 3 Geometries of space: flat, spherical, hyperbolic Professor Susskind presents three possible geometries of homogeneous space: flat (infinite), spherical (positively curved and finite), hyperbolic (negatively curved and infinite).

Chapter 3 Classical physics could not explain the spectra of black bodies. It predicted that the intensity (power emitted at a given wavelength) of emitted light should increase rapidly with decreasing wavelength without limit (the "ultraviolet catastrophe"). In the figure below, the curve labeled "Rayleigh-Jeans law" shows the classically expected behavior. However, the measured spectra actually showed an intensity maximum at a particular wavelength, while the intensity decreased at wavelengths both above and below the maximum. E = hf (Planck's formula) where h (Planck's constant) is an exceedingly small number whose value we do not need here, and f is the frequency of vibration of the oscillator (the number of times it vibrates per second). Also in the late 1800s, experimental physicists were measuring the emission of electrons from metallic objects when they shined light on the object. 3.2. Line spectra are another example of phenomena that could not be explained by classical physics. l=h/p