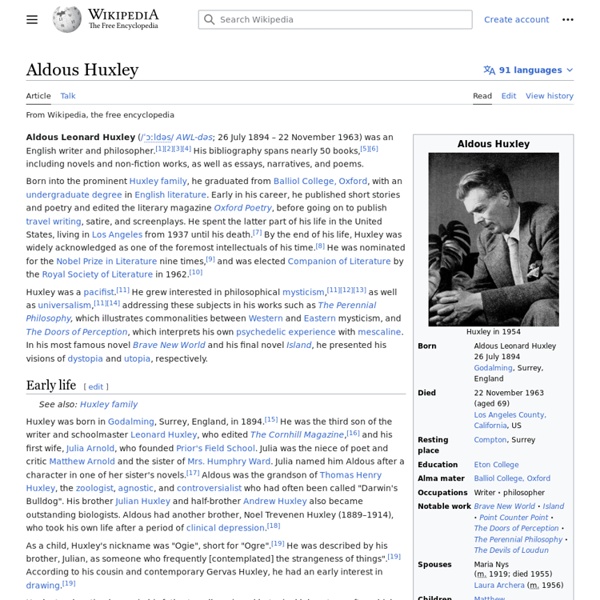 Aldous Leonard Huxley /ˈhʌksli/ (26 July 1894 – 22 November 1963) was an English writer, philosopher and a prominent member of the Huxley family. He was best known for his novels including Brave New World, set in a dystopian London, and for non-fiction books, such as The Doors of Perception, which recalls experiences when taking a psychedelic drug, and a wide-ranging output of essays. Early in his career Huxley edited the magazine Oxford Poetry, and published short stories and poetry. Mid career and later, he published travel writing, film stories and scripts. He spent the later part of his life in the US, living in Los Angeles from 1937 until his death. In 1962, a year before his death, he was elected Companion of Literature by the Royal Society of Literature.[1] Huxley was a humanist, pacifist, and satirist. Early life[edit] Huxley began his learning in his father's well-equipped botanical laboratory, then went to Hillside School, Malvern. Career[edit] Bloomsbury Set[edit] Eyesight[edit]

Kathleen Harrison Vault : Kat Harrison, Botanical Dimensions, and the Shamanic Plant Mind Since the introduction of shamanic plants and medicines to Western science, many anthropologists and laboratory wizards have struggled to divine their cultural significance and figure out how they work their peculiar magic. Yet, in spite of all the work done in university laboratories, sterile hospitals, and million-dollar pharmaceutical research wings, conventional science has done little to unravel the ancient mysteries of shamanic healing power. Divorced from traditional contexts, shamanic folk medicines and visionary practices have remained a mystery.

Nonprofits: Steal This Film For Your Own Purposes Tiffany Shlain, a filmmaker perhaps best known for the documentary Connected and for founding the Webby Awards, is turning into a fairy godmother for nonprofits in need of new ways to get out their messages. Her latest 10-minute film, Brain Power, could help childhood development-related nonprofits solicit donations, volunteers, and anything else they might need. We’ve written before about Shlain’s project, a series of digital shorts that nonprofits can use for free to further their causes. The first film in the series, A Declaration of Interdependence, was an experiment in what Shlain calls "cloud filmmaking"--where video and art from people around the world is integrated into a film. In Brain Power, Shlain uses research from Harvard’s Center on the Developing Child and the University of Washington’s I-LABS to explore connections between a child’s developing brain and the always-developing brain of the Internet. Check out the film above.

Hendrik Christian Andersen Hendrik Christian Andersen (April 15, 1872, in Bergen – December 19, 1940, in Rome) was a Norwegian-American sculptor, painter and urban planner. Background[edit] Andersen was born in Bergen, Norway, of parents Anders Andersen from Lærdal and Helene Monsine Monsen from Bergen. He immigrated as an infant with his family to Newport, Rhode Island the following year. Kathleen Harrison Vault Kathleen Harrison is an ethnobotanist, artist, and photographer who researches the relationship between plants and people, with a particular focus on art, myth, ritual, and spirituality. Harrison teaches in Hawaii, California, and the Peruvian Amazon. She has done fieldwork in Latin America for 30 years, and is the President and Projects Director of Botanical Dimensions, a non-profit foundation devoted to preserving medicinal and shamanic plant knowledge from the Amazonian rainforest and tropics around the world. Harrison co-founded the organization in 1985 with former husband, the late Terence McKenna. In her work with Botanical Dimensions, she has done fieldwork and supported indigenous projects in Mexico, Peru, Ecuador and Costa Rica. Harrison is a popular lecturer at conferences, seminars, and workshops; she continues to document the many faces of ethnobotany with photographs, which she combines with stories in her slide presentations.

vis.mediaartresearch.at/textass/textass.php?id=43 Statement of the [the next idea] Art- and Technology Grant Jury 2005 A New Concept Wilhelm Burger , Horst Hörtner , Gustav Pomberger , Daniela Pühringer , Christa Sommerer 1998 : By integrating its new competition "Cybergeneration u19 - freestyle computing " into the programme, the Prix Ars Electronica directly addressed young people in Austria for the first time. At the time talk revolved around computerage kids who had grown up with computers and new information technologies kids who had, so to speak, imbibed these innovations as "a fifth cultural technique" with their mother's milk. 2004 : Even cybergeneration kids get bigger and grow up.

Golden Age of Freethought The golden age of freethought describes the socio-political movement promoting freethought that developed in the mid 19th-century United States. The period roughly from 1875 to 1914 is referred to as "the high-water mark of freethought as an influential movement in American society".[1] It began around 1856 and lasted at least through the end of the century; author Susan Jacoby places the end of the Golden Age at the start of World War I. Freethought is a philosophical position that holds that ideas and opinions should be based on science and reason, and not restricted by authority, tradition, or religion.[2] The Golden Age was encouraged by the lectures of the extremely popular agnostic orator Robert G.

Michael Persinger Michael A. Persinger (born June 26, 1945) is a cognitive neuroscience researcher and university professor with over 200 peer-reviewed publications. He has worked at Laurentian University, located in Sudbury, Ontario, since 1971. He is primarily notable for his experimental work in the field of neurotheology, work which has been increasingly criticized in recent years.[1][3][4][5][6] Early life[edit] Research and academic work[edit]

Ars Electronica FESTIVAL A piece of high-tech equipment like an mp3 player should ideally be able to get across what it’s designed to do and how to operate it just as simply as a wedge, a sledgehammer or a saw does. You have the device in front of you, consider its form, try it out and, after a couple of attempts at most, you have all of its features down pat.Blanket statements like this can get designers, programmers and engineers really worked up. Their critique might well maintain that comparing a highly complex instrument that represents the culmination of thousands of technological advances that this civilization has brought forth—from gramophone cylinders and shellac discs to radio and all the way to fiberglass cables, the PC and digitization—with a simple wedge is pretty farfetched to say the least.But even companies like Microsoft, Intel and Adobe are increasingly coming around to this way of thinking.

Age of Enlightenment The Age of Enlightenment (or simply the Enlightenment, or Age of Reason) is an era from the 1650s to the 1780s in which cultural and intellectual forces in Western Europe emphasized reason, analysis and individualism rather than traditional lines of authority. It was promoted by philosophes and local thinkers in urban coffeehouses, salons and masonic lodges. It challenged the authority of institutions that were deeply rooted in society, such as the Catholic Church; there was much talk of ways to reform society with toleration, science and skepticism.

Dreams, Telepathy, and Various States of Consciousness You can read March 2011 issue, Table of Content and Articles We are pleased to present this special edition on Dreams, Telepathy, and Various States of Consciousness. This edition includes a broad array of articles from well-known authors in the field, as well as graduate students whose work also addresses topics such as anomalous experiences of mediums and advanced meditators, shamanic experiences, near-death experiences, experiences related to dreams and body wisdom, and the various ways that anomalous experiences can be conceptualized and categorized.