Looking into the hottest cosmic hearth. Radio astronomers gaze deep into the heart of an active galaxy January 26, 2016. 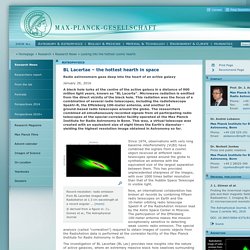 Researchers say a black hole CAN be seen using visible light. All you need is a 20 cm telescope to observe a nearby, active black hole, researchers have found. 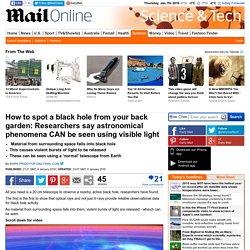 The find is the first to show that optical rays and not just X-rays provide reliable observational data for black hole activity. As material from surrounding space falls into them, violent bursts of light are released - whioch can be seen. Scroll down for video Scientists observing V404 Cygni, the nearest black hole to Earth, discovered that even amateur telescopes are capable of capturing violent outburst from black holes closest to Earth (stock image shown).

V404 Cygni, one of the black hole binaries thought to be nearest to Earth, 'woke up' after 26 years of dormancy on 15 June 2015 as it underwent such an outburst. Led by astronomers from Kyoto University, the team succeeded in obtaining unprecedented amounts of data from V404 Cygni, detecting repetitive patterns having timescales of several minutes to a few hours. Whirlpool galaxy's black hole is caught 'BURPING' galactic gas. Once caught in its irresistible gravitational pull, nothing is supposed to be able to escape a black hole, but astronomers have spotted one 'burping' out blasts of hot gas. 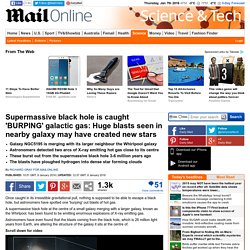 Astrophysicist discovers extremely rare skinny black hole in galaxy 1billion light-years away. The University of Colorado at Boulder's Julie Comerford has discovered a skinny black holeThe black hole is in a newly identified galaxy about 1 billion light-years away Most black holes are surrounded by stars but this one is not, perhaps the result of two galaxies colliding It could also be a rare example of an intermediate-sized black hole that likely will morph over time into a supermassive monster By Associated Press Published: 06:02 GMT, 7 January 2016 | Updated: 06:16 GMT, 7 January 2016 An astrophysicist has discovered something even rarer than a double-black hole galaxy: a skinny black hole. 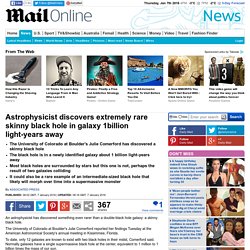 The University of Colorado at Boulder's Julie Comerford reported her findings Tuesday at the American Astronomical Society's annual meeting in Kissimmee, Florida. To date, only 12 galaxies are known to exist with two black holes in their midst, Comerford said. Scroll down for video. What's hidden inside black holes? It is traditionally believed that our universe was formed approximately 13 billion years ago after the infamous Big Bang. 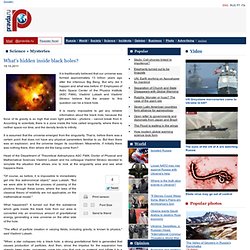 But why did it happen and what was before it? Employees of Astro Space Center of the Physics Institute (ASC FIAN), Vladimir Lukash and Vladimir Strokov believe that the answer to this question can be a black hole. It is nearly impossible to get any reliable information about the black hole, because the force of its gravity is so high that even light particles - photons - cannot break from it. According to scientists, there is a zone inside the hole called singularity, where there is neither space nor time, and the density tends to infinity. It is assumed that the universe emerged from the singularity. Head of the Department of Theoretical Astrophysics ASC FIAN, Doctor of Physical and Mathematical Sciences Vladimir Lukash and his colleague Vladimir Strokov decided to simulate the situation that allows one to look at the singularity area and see what happens there.

Journey to the point of no return (and back again): Astronomers successfully measure the radius of a black hole. Astronomers line three telescopes together to peer into a black hole'Giant telescope' allows team to measure jets leaving the 'event horizon' - and calculate the black hole's radius By Eddie Wrenn Published: 16:42 GMT, 1 October 2012 | Updated: 17:18 GMT, 2 October 2012. 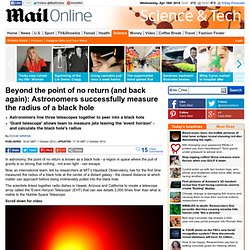 The galactic shredder: Nasa captures huge black hole pulling star to pieces after red giant 'wanders too close' Red giant pulled in by enormous gravity of supermassive black holeFirst time a known star has been seen being 'shredded'Outer layers of star stripped off first, then the helium-rich core By Rob Waugh Published: 07:21 GMT, 3 May 2012 | Updated: 11:52 GMT, 3 May 2012. 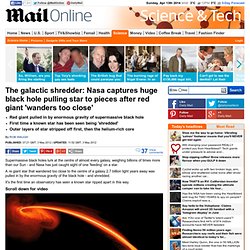 International study suggests a massive black hole exists in the Sword of Orion. (Phys.org)—An international team of astrophysicists, including UQ's Dr Holger Baumgardt, has shed light on the long-standing mystery of the binding force behind a cluster of unruly and rapidly swirling stars located in the famous Sword of Orion. 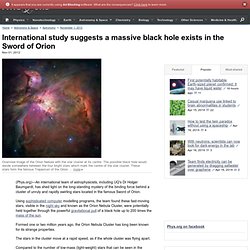 Using sophisticated computer modelling programs, the team found these fast-moving stars, visible in the night sky and known as the Orion Nebula Cluster, were potentially held together through the powerful gravitational pull of a black hole up to 200 times the mass of the sun. Formed one or two million years ago, the Orion Nebula Cluster has long been known for its strange properties. The stars in the cluster move at a rapid speed, as if the whole cluster was flying apart. Compared to the number of low-mass (light-weight) stars that can be seen in the cluster, the number of high-mass (heavy-weight) stars are too few and especially rapidly-moving. Dr Baumgardt is co-author of the study that was recently published in The Astrophysical Journal.

Related:  the theory of everything   -  Education   -  Enterprise