United States. If we explore the US culture through the lens of the 6-D Model, we can get a good overview of the deep driving factors of American culture relative to other cultures in our world. 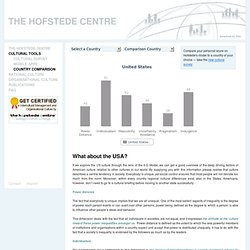 By supplying you with this information please realise that culture describes a central tendency in society. Everybody is unique, yet social control ensures that most people will not deviate too much from the norm. Moreover, within every country regional cultural differences exist, also in the States. Americans, however, don’t need to go to a cultural briefing before moving to another state successfully. Power distance The fact that everybody is unique implies that we are all unequal. This dimension deals with the fact that all individuals in societies are not equal, and it expresses the attitude of the culture toward these power inequalities amongst us. Individualism The fundamental issue addressed by this dimension is the degree of interdependence a society maintains among its members. What are Geert Hofstede's 5 Cultural Dimensions? In the 1980ies Geert Hofstede discovered 5 fundamental dimensions of national cultures that can be seen to illustrate different values in different national cultures. 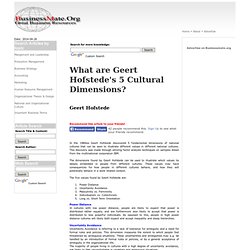 This discovery was made through utilizing factor analysis techniques on samples drawn from the multinational corporation IBM. The dimensions found by Geert Hofstede can be used to illustrate which values lie deeply embedded in people from different cultures. These values may have consequences for how people in different cultures behave, and how they will potentially behave in a work related context. The five values found by Geert Hofstede are: Power Distance Uncertainty Avoidance Masculinity vs. Power Distance In cultures with low power distance, people are likely to expect that power is distributed rather equally, and are furthermore also likely to accept that power is distributed to less powerful individuals. Uncertainty Avoidance Masculinity vs.

Individualism vs. Long vs. Long term orientation: Hofstede's Cultural Dimensions - Leadership Training from MindTools. Understanding Workplace Values Around the World Learn how to be more sensitive to the needs of people in different cultures. 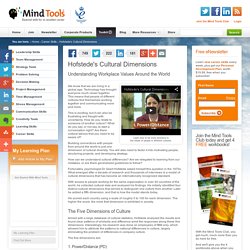 We know that we are living in a global age. Technology has brought everyone much closer together. This means that people of different cultures find themselves working together and communicating more and more. This is exciting, but it can also be frustrating and fraught with uncertainty. Building connections with people from around the world is just one dimension of cultural diversity. How can we understand cultural differences? Fortunately, psychologist Dr Geert Hofstede asked himself this question in the 1970s. With access to people working for the same organization in over 40 countries of the world, he collected cultural data and analyzed his findings. He scored each country using a scale of roughly 0 to 100 for each dimension. 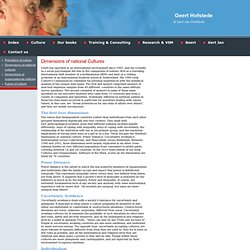 His 1980 book Culture's Consequences combined his personal experiences with the statistical analysis of two unique data bases. The first and largest comprised answers of matched employee samples from 40 different countries to the same attitude survey questions. The second consisted of answers to some of these same questions by his executive students who came from 15 countries and from a variety of companies and industries. Systematic differences between nations in these two data bases occurred in particular for questions dealing with values. Hofstede’s Cultural Dimensions - Research Methodology.

The theoretical framework of Cultural Dimensions introduced by Geert Hofstede as a result of assessing the values of more than 100,000 IBM workforce from 50 countries represent one of the most significant contributions to the development of cross-cultural studies. 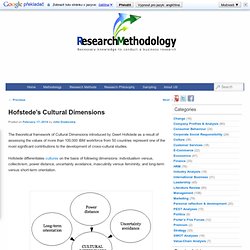 Hofstede differentiates cultures on the basis of following dimensions: individualism versus, collectivism, power distance, uncertainty avoidance, masculinity versus femininity, and long-term versus short-term orientation. Individualism “describes the tendency of people to see themselves as individuals rather than as members of a group” (Velo, 2012, p. 26), whereas collectivism is associated with preference for group thinking and prioritising advantages of the group over individualistic advantages. In organisations where collectivistic culture prevails employees consider decision making to be the responsibility of superiors. Hofstede's cultural dimensions theory. Overview[edit] Hofstede's cultural dimensions theory is a framework for cross-cultural communication. 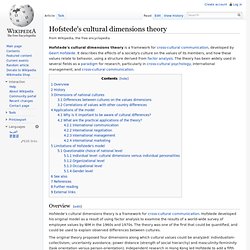 Hofstede developed his original model as a result of using factor analysis to examine the results of a world-wide survey of employee values by IBM in the 1960s and 1970s. The theory was one of the first that could be quantified, and could be used to explain observed differences between cultures. The original theory proposed four dimensions along which cultural values could be analyzed: individualism-collectivism; uncertainty avoidance; power distance (strength of social hierarchy) and masculinity-femininity (task orientation versus person-orientation). Independent research in Hong Kong led Hofstede to add a fifth dimension, long-term orientation, to cover aspects of values not discussed in the original paradigm. History[edit] In 1965, Geert founded the personnel research department of IBM Europe (which he managed until 1971).