Startling Evidence that AMERICANS are NOT FREE. The Petrodollar. The Incriminating History Lesson They Just Can't Teach in School. Don’t listen to the ruling elite: the world economy is in real trouble. Austerity - It's a lie and unecessary! Posted by Mike Gold on Tuesday, September 22, 2015 · 15 Comments “If you tell a lie big enough and keep repeating it, people will eventually come to believe it. 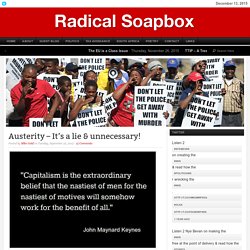 The lie can be maintained only for such time as the State can shield the people from the political, economic and/or military consequences of the lie. It thus becomes vitally important for the State to use all of its powers to repress dissent, for the truth is the mortal enemy of the lie, and thus by extension, the truth is the greatest enemy of the State.” Joseph Goebbels, Hitler’s Reich Minister of Propaganda It’s a political – not an economic – decision to maintain austerity.

Lies You Will Hear As The Economic Collapse Progresses. It is undeniable; the final collapse triggers are upon us, triggers alternative economists have been warning about since the initial implosion of 2008. 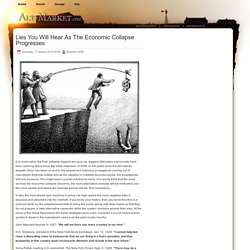 In the years since the derivatives disaster, there has been no end to the absurd and ludicrous propaganda coming out of mainstream financial outlets and as the situation in markets becomes worse, the propaganda will only increase. This might seem counter-intuitive to many. 10 Things That Every American Should Know About The Federal Reserve. What would happen if the Federal Reserve was shut down permanently? 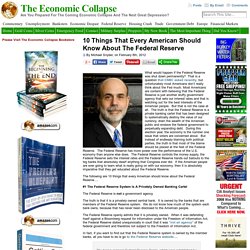 That is a question that CNBC asked recently, but unfortunately most Americans don’t really think about the Fed much. 19 Reasons Why The Federal Reserve Is At The Heart Of Our Economic Problems. Bank Insider: Worst Depression Ever Coming. Century of Enslavement: The History of the Federal Reserve. Podcast: Play in new window | Download | Embed What is the Federal Reserve system? 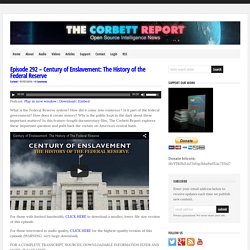 How did it come into existence? Is it part of the federal government? How does it create money? Why is the public kept in the dark about these important matters? For those with limited bandwidth, CLICK HERE to download a smaller, lower file size version of this episode. For those interested in audio quality, CLICK HERE for the highest-quality version of this episode (WARNING: very large download). corbettreport.com/federalreserve Filed in: Episodes • PodcastsTagged with: central banking • federal reserve • history • monetary reform • money. » 12 Numbers About The Global Financial Ponzi Scheme That Should Be Burned Into Your Brain Alex Jones' Infowars: There's a war on for your mind! U.S. National Debt Clock. Farsnews. Paul Buchheit: The United States Presides over a World Ruptured by Economic Inequality TEHRAN (FNA)- Paul Buchheit, a progressive American writer and activist, says that economic inequality is growing in the United States on a daily basis while the U.S. government continues to spend enormous amounts of money on military expeditions across the world. 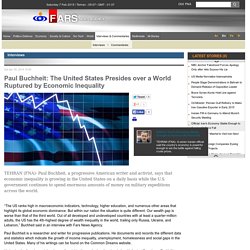 “The US ranks high in macroeconomic indicators, technology, higher education, and numerous other areas that highlight its global economic dominance. But within our nation the situation is quite different. Our wealth gap is worse than that of the third world. Out of all developed and undeveloped countries with at least a quarter-million adults, the US has the 4th-highest degree of wealth inequality in the world, trailing only Russia, Ukraine, and Lebanon,” Buchheit said in an interview with Fars News Agency. Paul Buchheit is a researcher and writer for progressive publications. Currency vs. money. Seven Stages of Empire. From dollar crisis to golden opportunity. The biggest scam in the history of mankind. By HiddenSecretsOfMoney.com Posted October 15, 2013 You are about to learn one of the biggest secrets in the history of the world...it's a secret that has huge effects for everyone who lives on this planet. 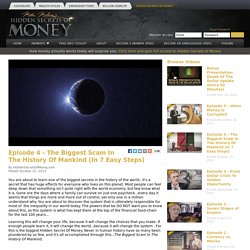 Most people can feel deep down that something isn't quite right with the world economy, but few know what it is. Gone are the days where a family can survive on just one paycheck...every day it seems that things are more and more out of control, yet only one in a million understand why.