Scaling in complex systems. I wrote a series of posts about scaling over three year ago which in part addressed some of the perversities of methods focused on accreditation revenue to which I referred yesterday. 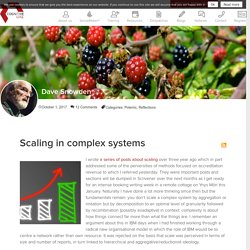 They were important posts and sections will be dumped in Scrivener over the next months as I get ready for an intense booking writing week in a remote cottage on Ynys Môn this January. Naturally I have done a lot more thinking since then but the fundamentals remain: you don’t scale a complex system by aggregation or imitation but by decomposition to an optimal level of granularity followed by recombination (possibly exadaptive) in context: complexity is about how things connect far more than what the things are. A Pattern Language Explained. Christopher Alexander is famous for his book on architecture, A Pattern Language. 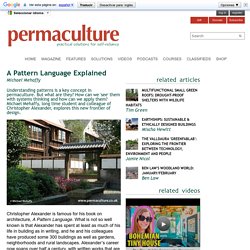 What is not so well known is that Alexander has spent at least as much of his life in building as in writing, and he and his colleagues have produced some 300 buildings as well as gardens, neighborhoods and rural landscapes. Alexander’s career now spans over half a century, with written works that are acknowledged landmarks of design theory. His first book in 1964, Notes on the Synthesis of Form, was widely celebrated at the time; one review by Industrial Design magazine hailed it as, “one of the most important contemporary books about the art of design, what it is, and how to go about it”. His later work has also had a remarkable influence in software, open source computing, sociology, biology and other diverse disciplines.

General System Theory. Disciplines, and proposed a different approach to and organization of knowledge. 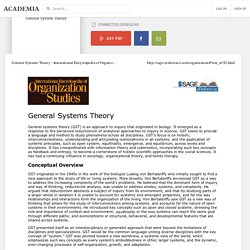 This goal of developing anew worldview was largely lost in the initial applications of GST, which were grounded in a moremechanistic, instrumental perspective, and seemed to promise the ability to control and predict moreaccurately and efficiently.GST has not proved to be the single unifying breakthrough approach that von Bertalanffy envisioned. Insome circles, GST is still viewed with suspicion as fundamentally scientistic. Complexity Rising: From Human Beings to Human Civilization, a Complexity Profile.

Since time immemorial humans have complained that life is becoming more complex, but it is only now that we have a hope to analyze formally and verify this lament. 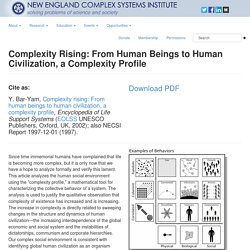 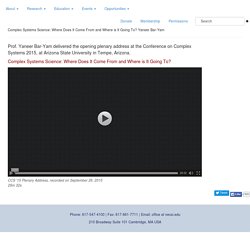 Yaneer Bar-Yam Prof. Microsoft Word - Kineman_foundations_fin.doc - 352. Quantifying Complexity Theory. By Chris Lucas "All the mathematical sciences are founded on relations between physical laws and laws of numbers, so that the aim of exact science is to reduce the problems of nature to the determination of quantities by operations with numbers. "James Clerk Maxwell, On Faraday's Lines of Force, 1856. Rosen Modeling Relation - Panmere. Overview This commitment to the central role of modeling, as embodied in the quote above, began for Rosen during his early days as a student, and eventually manifested in his development of the Modeling Relation. [1] To better understand Rosen’s statement above, we need to understand the Modeling Relation. 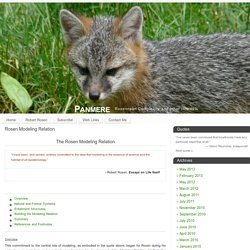 The Modeling Relation is described primarily in Rosen’s books, Anticipatory Systems and Life Itself. The former, in particular, devotes many chapters to defining, describing, and illuminating the consequences of the Modeling Relation. Varela 1987a.pdf. A brief journey through complexity - Kineman. Fundamentals of relational complexity theory - Kineman. System_literacy.pdf. Maturana_SystemicLaws.pdf. Emergence: the remarkable simplicity of complexity. From the fractal patterns of snowflakes to cellular lifeforms, our universe is full of complex phenomena – but how does this complexity arise? 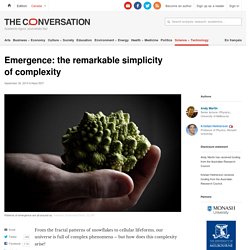 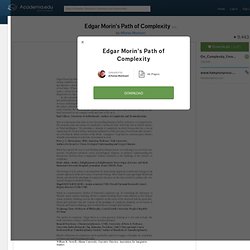 He has aunique capability to move between the natural and social sciences—without doing either of themany injustice—and is ideally placed to address the epistemological, ethical and practical problemsof our times. [cs/0610049] Restricted Complexity, General Complexity. Towards Designing an Ecosystem of Change for the Future of the American Research Library - mm13sp-pendleton-juliian.pdf. 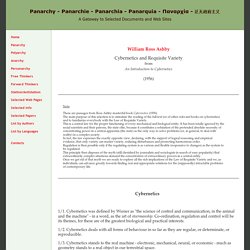 Cybernetics was defined by Wiener as "the science of control and communication, in the animal and the machine" - in a word, as the art of steermanship. Co-ordination, regulation and control will be its themes, for these are of the greatest biological and practical interests. 1/2. Cybernetics deals with all forms of behaviour in so far as they are regular, or determinate, or reproducible. 1/3. 1/6. One is that it offers a single vocabulary and a single set of concepts suitable for representing the most diverse types of systems. It has been found repeatedly in science that the discovery that two branches are related leads to each branch helping in the development of the other. 1/7.