From brick and mortar shops to city planning, we cover sustainable trends in construction, renovation, and more. 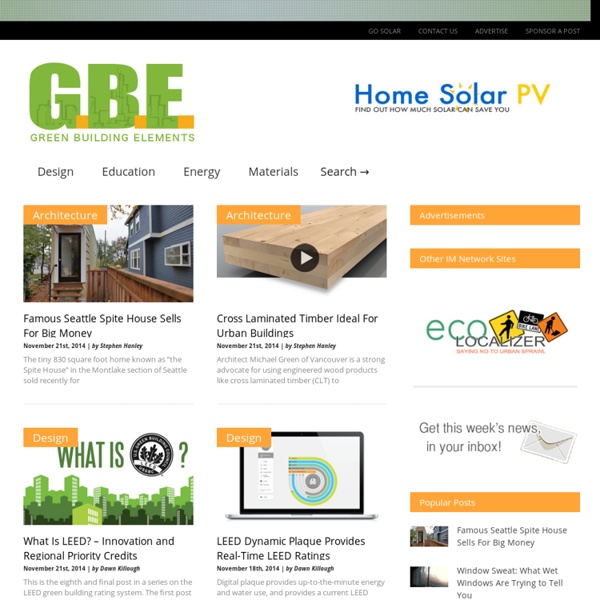 How Much Land You Need To Go Off The Grid? The original homesteaders, the pioneers who went West, were following the American dream as it was understood in the 19th century — they wanted a house, and land, and a farm, of their own. Those who become homesteaders today aren’t necessarily aspirational in the same way; instead, they’re looking to escape mainstream America. They want to do so for many reasons: privacy, radicalism, a philosophical belief in self-sufficiency. But “going off the grid” is a daunting proposal, especially for those with families. Non-homesteaders rely on others for virtually everything; not just our haircuts, but our electricity and our eggs. According to the company’s research, a family of four that eats meat, dairy and eggs would need around two acres of land to feed themselves for a year. Here’s the chart. [Via HuffingtonPost.com]

Architecture of Dhyanalinga - an elliptical brick dome, made of stabilized earth blocks In ancient temples, the structure that houses the Deity is as important as the Deity itself. The parikrama or the walkway of the temple, the garbhagriha or the innermost shrine of the temple, the shape and the size of the idol, the mudra held by the idol and the mantra (sound) used for the consecration of the temple are the fundamental parameters of a temple. These elements are matched and built according to a certain science and based upon the understanding of the energies, thereby creating a powerful energy situation and facilitating inner transformation. The elliptical dome that houses the Dhyanalinga is 76 feet in diameter and 33 feet high. The simple technology used is this -- all the bricks are trying to fall down at the same time!

Jackie’s Tips For Hardcore Homesteading By Jackie Clay Many of us have a garden and enjoy fresh vegetables during the summer and fall. Maybe we even have a few chickens for eggs and meat. But many of us may want to extend our homesteading to what I call "hard-core" homesteading. Luckily, most of us with a piece of out-of-the-way land can become nearly "store-bought-free," raising much of what we need in nearly the same way as did our ancestors. There is a vast difference between this type of survival homesteading and stars-in-the-eyes, back-to-nature, recreational homesteading to relieve stress and provide enjoyment. The survival garden It has been said that one can raise enough food for a family of four in a 50- by 50-foot space. When one needs a garden to put up food, not only for the winter but possibly for a year or two, we're talking about at least an acre of intense cropping. And if there are no store shelves to choose from, we will all need to take care of our own needs at home. You can't grow everything, everywhere.

Washington State Becomes Latest GMO Battleground Active Citizens, Biodiversity, Civil Society, Economy & Trade, Environment, Featured, Food & Agriculture, Headlines, Health, North America, TerraViva United Nations Protesters outside the offices of agriculture giant Monsanto who were rallying as part of a "national day of solidarity." Credit: Daniel Lobo/cc by 2.0 - The northwestern state of Washington could become the first in the U.S. to require labeling of genetically modified organisms (GMOs) on foods and food packages, after a similar measure in California failed last year. Over 353,000 Washingtonians signed on to a petition creating Initiative 522, which will appear on the Nov. 5 ballot statewide. "The 'no' side has corporations that are all bankrolling their campaign." -- Elizabeth Larter of Yes on 522 Last year, Washington and Colorado voted to legalise marijuana altogether. “We have a history of leading on issues. Since the initiative was written, the number of countries with GMO labeling has grown to 64. Corporate opposition

Nine Things to Consider When Looking For Your Survival House image from Seattle Municipal Archives You don’t need a bunker in a remote location in Idaho or Montana to have a home that is able to withstand an emergency situation. However, there are a few things you’ll want to consider when choosing where to live as your home is an often overlooked but important part of your preparedness efforts. If you’re looking to relocate (or just want to run your current location through a survival checkup), here are a few important things to consider that affect the security and survivability of your home. 1. 2. 3. Weather hazards can encompass large areas, so are sometimes difficult to avoid. 4. 5. 6. 7. 8. 9. Bonus #10. My home is my castle (albeit a very small castle). Mallory McDuff, Ph.D.: Wendell Berry's Sacred Environmentalism Writer, farmer and modern-day prophet Wendell Berry will visit the college where I teach and live this fall, and I'm trying to remain cool and level-headed. For me, that's a challenge because I marvel at his poetic prose that challenges us to hold our spiritual values at the center of our sense of place. During his short stay, I fear becoming part of an agrarian paparazzi, planning my jogging routes around his campus tour or visit to an Appalachian Studies class. While I plant my fall garden, I visualize him strolling past my on-campus duplex when I'm harvesting kale with my two daughters. Yes, this hero worship is amusing on some level, if you consider that I'm a 45-year-old mother, writer and academic. But I believe that we need to feel reverence for those voices calling us to put our religious values to work in local communities to sustain God's earth. We need alternative road signs and luminaries if we are going to reconnect human communities with places.

Adaptable House caters for growing family, home office, retired living, or divorce It uses sliding partitions and storage walls, extension modules and a puzzle of garden components. Danish architects Henning Larsen's new Adaptable House is designed to accommodate the most common lifestyle changes, from having children to settling into retirement. The energy-efficient home can even be fairly separated in case of divorce. View all Realized with developers Realdania Byg and contractors GXN, the Adaptable House not only offers flexible room arrangements, but has a built-in strategy for extending and separating volumes. Pre-figuring life changes The Adaptable House was conceived to help meet a range of lifestyle changes. Perhaps the most innovative and coolly pragmatic gesture is in adapting for divorce. Sliding partitions make flexible interiors (Photo: Jesper Ray/Realdania Byg) Not just a room under the stairs The architects were determined that any new configurations meet their criteria for natural light, ventilation, plus noise and temperature control. Adding on

Acoustic ecology Acoustic ecology, sometimes called ecoacoustics or soundscape studies, is a discipline studying the relationship, mediated through sound, between living beings and their environment.[1] Acoustic ecology studies started in the late 1960s with R. Murray Schafer and his team at Simon Fraser University (Vancouver, Canada) as part of the World Soundscape Project. The original WSP team included Barry Truax and Hildegard Westerkamp, Bruce Davies and Peter Huse, among others. The first study produced by the WSP was titled The Vancouver Soundscape. The interest in this area grew enormously after this pioneer and innovative study and the area of acoustic ecology raised the interest of researchers and artists all over the world. Every three years since the WFAE's founding at Banff, Canada in 1993, an international symposium has taken place. From its roots in the sonic sociology and radio art of Schafer and his colleagues, acoustic ecology has found expression in many different fields. Marc E.

What Kind Of Small Farm Is Right For You? So, you're planning a small farm, but you're not sure if you want to have a hobby farm, a homestead, or a small farm business. What do you do? How do you decide on the best fit? Consider Your Goals The first thing to think about is, what do you want out of your small farm? For example, are you an entrepreneurial type who gets warm and glowy when you envision creating value-added farm products and selling them at farmers markets, or growing vegetables on acres of farmland and selling them in bulk to restaurants? Set Goals for Your Small Farm Hobby Farming Hobby farming is for people who have another primary source of income and want to have a farm that doesn't have to produce income or support them by providing for most or all of their needs. Hobby farmers can put a lot of money into their hobby farms, or they can run them more like a homestead in that they want to minimize how much money they use as an input. How to Start a Hobby Farm A Small Farm Business How to Start a Small Farm Business

Viktor Schauberger Viktor Schauberger (30 June 1885, Holzschlag, Upper Austria[1] – 25 September 1958, Linz, Austria[2]) was an Austrian forest caretaker, naturalist, philosopher, inventor and biomimicry experimenter. Schauberger developed his own ideas based on what he observed in nature. In Implosion magazine, a magazine released by Schauberger's family, he said that aeronautical and marine engineers had incorrectly designed the propeller. He stated: “As best demonstrated by Nature in the case of the aerofoil maple-seed, today’s propeller is a pressure-screw and therefore a braking screw, whose purpose is to allow the heavy maple-seed to fall parachute-like slowly towards the ground and to be carried away sideways by the wind in the process. Alick Bartholomew has written a book[4] about Schauberger's unorthodox ideas. See also[edit] Notes[edit] External links[edit]