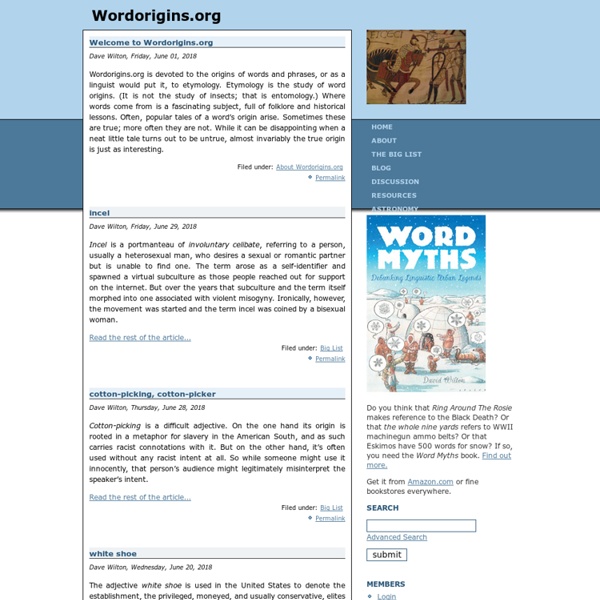 Back in November, George Walkden published a paper on the Old English word hwæt and how it is used in in Old English poetry, most famously in the opening lines of Beowulf: Hwæt! We Gar-Dena in geardagum, þeodcyninga þrym gefrunon, hu ða æþelingas ellen fremedon. My previous post summarizing Walkden’s article is here. But in a nutshell, Walkden says that instead of translating hwæt as an independent interjection “Listen!” “Lo!”

Etymologically Speaking... From the old Arabic word "hashshshin," which meant, "someone who is addicted to hash," that is, marijuana. Originally refered to a group of warriors who would smoke up before battle. Aaron White adds: You may want to explore the fact that the hashshshins were somewhat of a voodoo-ized grand conspiracy scapegoat cult (the very fact of their existence is impossible to confirm). They supposedly were a secret society (a la the FreeMasons) which was influential in every middle eastern court from Persia to Bangladesh. Practice the Word Formation task for Cambridge First Certificate in English (FCE) Paper 3 Use of English About Part 3 Word Formation You will read a short text of around 200 words, which has 8 gaps. For each gap you have to use a given 'stem' word to make the correct form of the missing word. In the exam you transfer your answer to a special answer sheet. Part 3 tests your knowledge of the way words are formed in English, including the use of prefixes and suffixes, and spelling rules associated with these changes.

How to Use Mental Illness in Your Writing Sunday, April 8, 2012 Mental illness is always a tricky topic to discuss, especially in the politically correct society of the present. I can tell you though, I work in a psychiatric hospital, and the patients there are often more than happy to discuss their illnesses, whether you would like them to or not. This is how I came to meet Jim Bob, the recovering-alcoholic duckling who likes nothing more than to chill out with his issue of Cosmo. It is all part of their character, and as we readers and writers of fiction know, character is a huge part of the story world. The most famous mentally ill character in fiction is of course Gollum/Sméagol.

European Maps Showing Origins Of Common Words U.S. playwright Rita Mae Brown said: "Language is the road map of a culture. It tells you where its people come from and where they are going." That quote comes to mind looking at these fascinating European etymology maps of various commons words posted by reddit user sp07, which provide a kind of cultural commentary on Europe. The word for "church" shows the influence of ancient Greece:

First Certificate in English (FCE) Word Formation The third part of the Use of English paper in the First Certificate Examination is word formation where you have to use a root such as 'able' and create an appropriate word (disable, unable, ability) to fill the gap in a text. Word Formation Exercise 1 Word Formation Exercise 2 Exam Tip! If you are sure that the word is, for example, an adjective but you can't think what the exact word is, try thinking of "usual" prefixes and suffixes. Perhaps it needs the suffix "ive" or the prefix "de". Stephen King On How To Write Mark Mainz / Getty Images Stephen King. Renowned author Stephen King writes stories that captivate millions of people around the world and earn him an estimated $17 million a year. In his memoir, "On Writing," King shares valuable insights into how to be a better writer.

How to Punctuate Dialogue Punctuating Dialogue Quotation marks began in ancient Greek texts as two curved lines that represented the lips of a person speaking. One curved line was placed at the beginning, as if the writer were saying, “I’m telling you something someone else said.” The other curved line came at the end, to say, “I’ve finished writing the words that came out of the other person’s mouth.” Quotation marks are placed before the first word of a quote and after the punctuation that follows the last word. EX: The teacher said, “In this class there will be no talking, chewing, breathing, unnecessary eye movements, or tap dancing.”A quoted remark begins with a capital letter: it’s the speaker’s first word.

16 Websites to Teach and Learn Vocabulary There are now several web tools that are really great in teaching vocabulary and that you can use with your students in the classroom. We have curated a list a list of some of the best web tools to teach vocabulary. Check them down below. 1- Vocabulary.com This is a website that will hep students master the vocabulary essential to their academic success. 2- BBC Learning English