A collection of related resources and strategies. 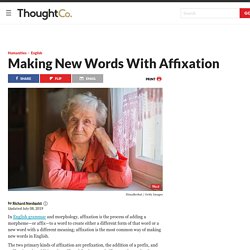 The two primary kinds of affixation are prefixation, the addition of a prefix, and suffixation, the addition of a suffix, while clusters of affixes can be used to form complex words. A large majority of new words in the English language today are either a result of blending—mashing two words or partial words together to form a new one—or affixation. Uses of Affixes An affix is a word element of English grammar used to alter the meaning or form of a word and comes in the form of either a prefix or a suffix. Prefixes include examples like "un-," "self-," and "re-," while suffixes come in the form of ending elements like "-hood," "-ing," or "-ed. 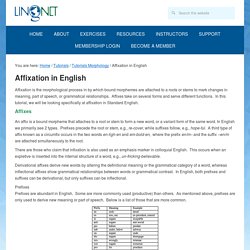 Affixes take on several forms and serve different functions. In this tutorial, we will be looking specifically at affixation in Standard English. 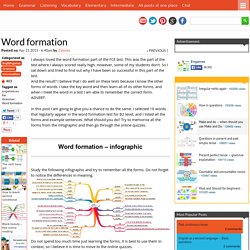 This was the part of the test where I always scored really high. However, some of my students don’t. So I sat down and tried to find out why I have been so successful in this part of the test. And the result? I believe that I do well on these tests because I know the other forms of words. In this post I am going to give you a chance to do the same. Word formation - FCE style. Suffix mania! Long list of suffixes, incl. meaning, word lists, examples,

Our suffix word lists are the second part of our comprehensive root word tables: Suffixes are word endings that add a certain meaning to the word. 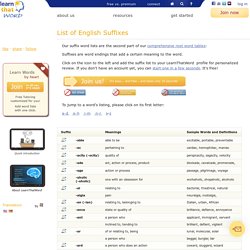 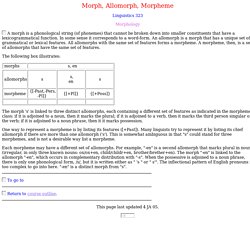 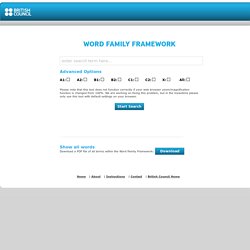 The WFF is a searchable resource for teachers and learners of English that consists of over 22,000 vocabulary items arranged according to six levels aligned to the Common European Framework of Reference. What can the WFF be used for? The WFF can be used by institutions, teachers and learners to construct target vocabularies for individual learning, syllabus and lesson planning, materials design and exam preparation.

Translation Procedures.pdf. Word Formation Processes. Free English Morphological Analysis Service. In English, a new word can be formed by adding a prefix or a suffix to a base word. 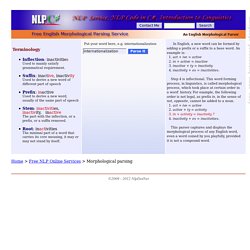 An example is: 1. act + ive = active 2. in + active = inactive 3. inactive + ty = inactivity 4. inactivity + es = inactivities. Step 4 is inflectional. This word forming process, in linguistics, is called morphological process, which took place at certain order in a word' history. For example, the following order is not legal, as prefix in, in the sense of not, opposite, cannot be added to a noun. 1. act + ive = active 2. active + ty = activity 3. in + activity = inactivity ? 4. inactivity + es = inactivities. FREE WORD-FORMATION information. Teaching Vocabulary Through Word Formation Strategies Among Iranian Intermediate EFL Students by Mohammad Ali Nasrollahi. Technical & Vocational University of Iran August 24, 2011 Abstract: The aim of this study was to determine whether word formation strategy improves vocabulary learning of Iranian intermediate EFL students, or not. 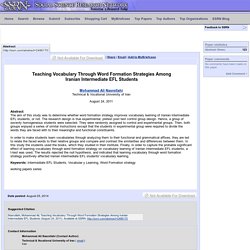 The research design is true experimental, pretest post test control group design. Hence, a group of seventy homogeneous students were selected. They were randomly assigned to control and experimental groups. In order to make students learn vocabularies through analyzing them to their functional and grammatical affixes, they are led to relate the faced words to their relative groups and compare and contrast the similarities and differences between them. Keywords: Intermediate EFL Students, Vocabular y Learning, Word Formation strategy working papers series. Cambridge First Certificate in English Examination - Word Formation. The third part of the Use of English paper in the First Certificate Examination is word formation where students use a root such as 'able' and create an appropriate word (disable, unable, ability) to fill the gap in a text. 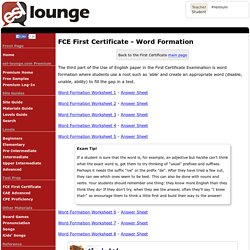 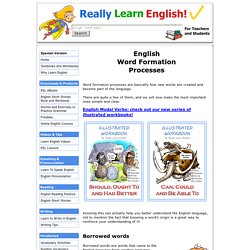 There are quite a few of them, and we will now make the most important ones simple and clear. English Modal Verbs: check out our new series of illustrated workbooks! Knowing this can actually help you better understand the English language, not to mention the fact that knowing a word's origin is a great way to reinforce your understanding of it! Borrowed words Borrowed words are words that came to the English language from another language. 7 Word Formation Games. Fun classroom activities for prefixes and suffixes, especially useful for FCE, CAE and other exam classes. Word formation is the addition of affixes like -ly and semi- to make longer words and different kinds of speech. Although it is often included in EFL exams and higher-level textbooks, it still probably gets just a few percent of the attention of lists of similar vocabulary, let alone tenses. Perhaps one reason for that is the lack of fun things you can do with it, something that this article seeks to start redressing.

For each gap you have to use a given 'stem' word to make the correct form of the missing word. In the exam you transfer your answer to a special answer sheet. Part 3 tests your knowledge of the way words are formed in English, including the use of prefixes and suffixes, and spelling rules associated with these changes. Now try our exercises 1. 2. Word Information - an English dictionary about English vocabulary words and etymologies derived primarily from Latin and Greek word origins. ELLO- Morphology: An introduction to word formation. Morphology At the turn of the 20th century, new word-formation processes were scrutinized with a highly critical eye: new words were widely perceived as debased, even barbaric. Today, linguists not merely accept the diachronic development of language as such, but view language evolution and word-formation processes as an indication of a language’s creativeness and vivacity.

Source of the picture: mythicjourneys.org Most generally, compounding and – of course – derivation represent the two major, most productive word-formation processes in English. However, there are further processes significant to producing new words. Word formation. Word Formation :Processes. As pointed out earlier, word-formation tries to explain the processes through which we can create new word forms. We’ve already seen some of these at work when we looked at morphemes and word classes, but now we’ll investigate them a little more closely, initially using exploratory methods again, rather than just looking at long lists of morphemes and listing their functions. Word formation process.

Word formation processes. Words in English: Types of Word Formation. Word formation - 1-English. Word Formation Exercises. Onomatopeias. Wordorigins.org. Lemma - UNL Wiki. Lemma is the canonical (citation) form of a lexeme, i.e., the word as it would appear in an ordinary dictionary. Lexemes, as a set of different word forms with different inflectional affixes, but with the same stem, are normally referred to by a citation (default) word form called lemma. The lemma, more generally referred to as headword, is essentially an abstract representation, subsuming all the formal lexical variations which may apply within the same lexeme. For instance, the lexeme comprising the word forms "die", "dies", "died", "dying" is normally referred, in English, by the lemma "die".

101 Onomatopoeia Examples. Examples of Onomatopoeia for Kids. Rachelle Burk's RESOURCES for CHILDREN'S WRITERS: Onomatopoeia Word List. Onomatopoeia List — Onomatopoeia Examples. Writing and Illustrating. Blends Word List. Grammatical Conversion in English: Converting Words Into Other Parts of Speech. Written by: Heather Marie Kosur • edited by: Rebecca Scudder • updated: 12/10/2013. Obsolete and archaic terms. This is a policy truly in development. Thus this page includes many aspects of reasoning and discussion which may later be removed for conciseness.This "policy" will be renamed, if necessary, as appropriate when the current debate resolves.