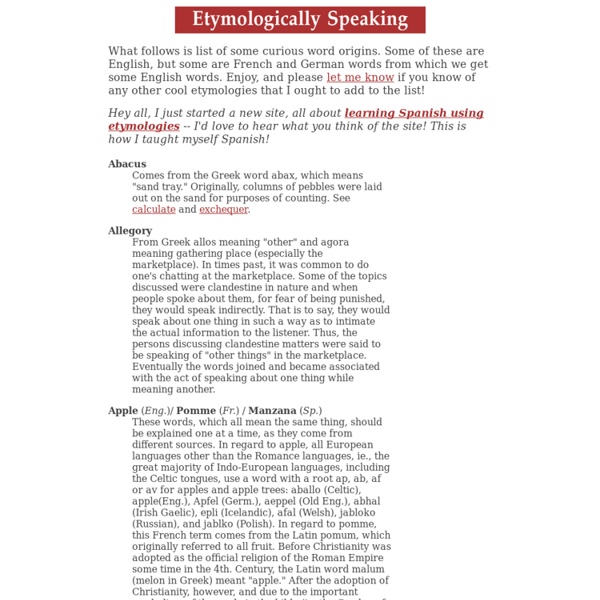 From the old Arabic word "hashshshin," which meant, "someone who is addicted to hash," that is, marijuana. Originally refered to a group of warriors who would smoke up before battle. Aaron White adds: You may want to explore the fact that the hashshshins were somewhat of a voodoo-ized grand conspiracy scapegoat cult (the very fact of their existence is impossible to confirm). They supposedly were a secret society (a la the FreeMasons) which was influential in every middle eastern court from Persia to Bangladesh. They were supposedly a brotherhood of assasins, devoted to their caballa and its secrecy, protected by an unlimited number of fanatical followers and unlimited material wealth. Assassination was their favorite method of instituting their power (see the Zoroastrian lore of the eunich priest Arachmenes and his assistance to Darius and Xerxes in their rise to/fall from power). R.

European Maps Showing Origins Of Common Words U.S. playwright Rita Mae Brown said: "Language is the road map of a culture. It tells you where its people come from and where they are going." That quote comes to mind looking at these fascinating European etymology maps of various commons words posted by reddit user sp07, which provide a kind of cultural commentary on Europe.

Ten Principles To Live By In Fiercely Complex Times If you're like most people I work with in companies, the demands come at you from every angle, all day long, and you have to make difficult decisions without much time to think about them. What enduring principles can you rely on to make choices that reflect openness, integrity and authenticity? Here are ten that work for me: 1. Always challenge certainty, especially your own. When you think you're undeniably right, ask yourself "What might I be missing here?"

An Essay by Einstein "How strange is the lot of us mortals! Each of us is here for a brief sojourn; for what purpose he knows not, though he sometimes thinks he senses it. But without deeper reflection one knows from daily life that one exists for other people -- first of all for those upon whose smiles and well-being our own happiness is wholly dependent, and then for the many, unknown to us, to whose destinies we are bound by the ties of sympathy. A hundred times every day I remind myself that my inner and outer life are based on the labors of other men, living and dead, and that I must exert myself in order to give in the same measure as I have received and am still receiving... "I have never looked upon ease and happiness as ends in themselves -- this critical basis I call the ideal of a pigsty.

12 Letters That Didn't Make the Alphabet You know the alphabet. It’s one of the first things you’re taught in school. But did you know that they’re not teaching you all of the alphabet? There are quite a few letters we tossed aside as our language grew, and you probably never even knew they existed. 1. Thorn

Welcome to Chandoo.org - A short introduction to our site Thank you so much for taking time to visit us. Over the last few weeks, we have quite a few new members to the site. Its good time I said hello and introduced this site to you. What is Chandoo.org? At Chandoo.org, our goal is simple. We want you to become awesome in Excel. The Tower of Babel << Home Page The Tower of Babel An International Etymological Database Project Participants (so far): John Conway's Game of Life The Game The Game of Life is not your typical computer game. It is a 'cellular automaton', and was invented by Cambridge mathematician John Conway. This game became widely known when it was mentioned in an article published by Scientific American in 1970.

10 Mind-Blowing Theories That Will Change Your Perception of the World Reality is not as obvious and simple as we like to think. Some of the things that we accept as true at face value are notoriously wrong. Scientists and philosophers have made every effort to change our common perceptions of it. The 10 examples below will show you what I mean. 1. Root Words Teacher Tips I have always used root words as a quick class opener. I have even used them when my school sprang for the Sadlier-Oxford books as the two work well together. The biology of dreaming o one would normally consider David Maurice, Ph.D., professor of ocular physiology in the Department of Ophthalmology at Columbia-Presbyterian Medical Center, a revolutionary. Nevertheless, he has reignited a decades-long controversy that could spark a revolutionary re-evaluation of an entire field of behavioral research. Dr. Maurice has developed a startling new line of scientific inquiry that, when added to other findings, could change our understanding of rapid eye movement (REM) sleep and the nature of dreams. What Maurice has done is to suggest an alternative explanation for the phenomenon known as REM sleep, the stage in which the eyes rapidly move and most dreams occur.