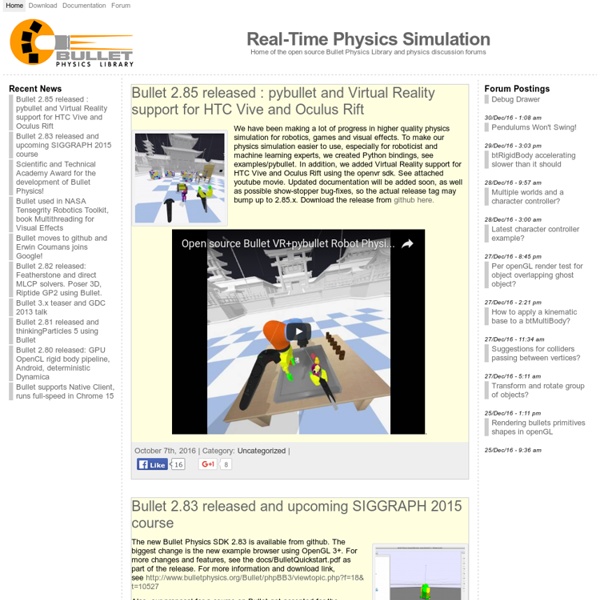 We have been making a lot of progress in higher quality physics simulation for robotics, games and visual effects. To make our physics simulation easier to use, especially for roboticist and machine learning experts, we created Python bindings, see examples/pybullet. In addition, we added Virtual Reality support for HTC Vive and Oculus Rift using the openvr sdk. See attached youtube movie. Updated documentation will be added soon, as well as possible show-stopper bug-fixes, so the actual release tag may bump up to 2.85.x. The new Bullet Physics SDK 2.83 is available from github. Also, our proposal for a course on Bullet got accepted for the upcoming SIGGRAPH 2015 conference in Los Angeles. Tuesday, 11 August 3:45 pm - 5:15 pm, Los Angeles Convention Center, Room 404AB UPDATE: here are the slide decks: 3:45-4.15 pmIntroduction to rigid body pipeline, collision detection 4:15-4:45 pmAdvances in constraint solving, Featherstone Articulated Body Algorithm For more info, see this forum post.

Rust TeleSUR Adrenaline uol com br Alberto de Sampaio Nhobi FestivalJapanMediaArts.jp - 第19回文化庁メディア芸術祭 Dragongal Souryu - SNK - ドラゴンギャル〜双龍の闘い〜 - パチスロ - SNKプレイモア Prev Next 読込中 PontalEngenharia.com.br BENDIS! inkedsleeves asked:I heard you use final draft to write your comic book scripts. I'm trying to do the same, but with some difficulties. Under what temple do you use to write your scripts? i write it all under standard script format. its the strongest for me. but there is no right or wrong here. i just like it. a lot. i know there are comic templates on final draft as well, but i like the way the main format works, leahcimpham asked:At the end of the "Spider-Men" mini-series, what would the reveal have been? mythrilreflections asked:You're not breaking up Jessica and Luke are you? keep reading. i’ll be very honest with you, i am letting the characters decide. i know it sounds crazy because they are both voices in my head but that is how they got together in the first place and i want to see what they want to do. so stay tuned, with me :) hail ceaser but david mack and i just tore through a lot of academy screeners, (become a professional writer, they just send them to your house :) )