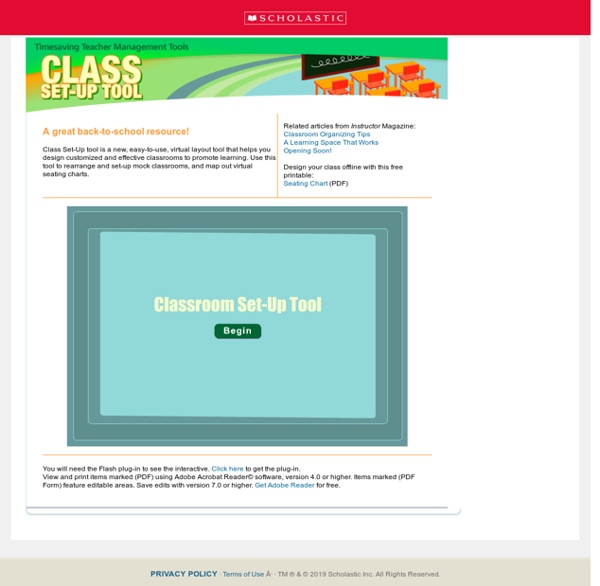 Council of Europe Language Policy Portal Languages are a fundamental aspect of people’s lives and the democratic functioning of society. In response to the needs identified in or by its member states, the Council of Europe has been working over the past few decades to compile a set of resources made available to education authorities and professionals and benefiting all Europe’s citizens (see milestones). Some of the end products have been widely distributed beyond Europe. The objectives of the Language policy Programme form part of the broader role and goals of the Council of Europe (in the context of the European Cultural Convention), concerning in particular the rights of individuals, social inclusion and cohesion, intercultural understanding and equal access to quality education.

Free Classroom seating plan generator Thank you for visiting this app and giving it a go. I hope you will find it very useful! This site uses Google Analytics to see how the site is used (e.g. how people reach this web site). Any seating plan data you enter is not sent to Google or any other server - it exists only on your computer. Embracing digital messiness in education It’s not just cities, politics and civic life that suffer from an excess of technological determinism and techno-utopian visions. In education, too, ‘digital by default’ thinking tends to dominate decision-making, and technology is frequently looked at as either a cause of, or a solution to, many apparent ‘problems’ in schools, and in further, higher and continuing education. Utopian and dystopian narratives of technology are widespread in discussions of digital education. Headlines about the recent massive open online course (MOOC) phenomenon indicate how this plays out with any given educational technology trend, with journalists asking whether MOOCs would: The relationship of educators, institutions and researchers to technology has often been characterised by attempts at control and order.

Neuromyth 1 The brain is only plastic for certain kinds of information during specific ‘critical periods’-thereby the first three years of a child are decisive for later development and success in life. The concept of critical periods states that there are certain periods during early life when the brain’s capacity for adjustment in response to experience is substantially greater than it is in adulthood. This concept originated from observations by some of the pioneers in the study of animal behaviour. For example, Konrad Lorenz examined a dramatic example of a critical period: imprinting in birds.

Random Group Maker ankara escort beylikdüzü escort eskişehir escortataşehir escort A beginner’s guide to understanding UX design If you are thinking of working on your conversion optimization and landing page optimization, understanding UX design is essential. As you know, we write a lot about the user, the single visitor that arrives on your site or landing page and needs to be triggered and helped around. UX design helps make sure that during this process the most important person isn’t left out of the mix: The user. Centre for Educational Neuroscience Teachers and parents have a great enthusiasm for the brain sciences and the light they can shed on children’s and adults’ learning in educational environments. We share that enthusiasm at the CEN. However, we also believe that sometimes this enthusiasm can lead to educators too readily accepting teaching practices, ideas, or techniques that do not actually have a scientific basis in neuroscience – or which reflect some basis in neuroscience but have not been rigorously tested within an educational context.

Random Student Generator The Transum name selecting application helps teachers choose students in a completely random way. Click on the select button to find one of the student names in the class list. Edit the class list using the text boxes to the right of this page. The Cognitive Benefits of Doodling When computers entered the mainstream, some art schools abandoned drawing classes to make time for the new software they had to teach. The arrival of state-of-the-art programs prompted backlash among those who’d argued for years that drawing is integral to literacy. “When you draw an object, the mind becomes deeply, intensely attentive,” says the designer Milton Glaser, an author of a 2008 monograph titled Drawing Is Thinking.

Neuromyth Busters - [Everyday] Psychophilosophy Science and technology revolutionize our lives, but memory, tradition, and myth frame our response. — Arthur M. Schlesinger After watching a good movie like Dr. The next design trend is one that eliminates all choices Performance wear is typically designed for sports and extreme environments—brutally cold and windy mountain ranges, heat-baked deserts—situations where people actually need their clothing to protect them from the elements without restricting movement. Continuing advances in design, fabric technology, and manufacturing have made these clothes more high-performance than ever. Now a crop of designers has made it their mission to create advanced technical garments of this type for another harsh setting: cities. “The winter in New York or a pouring spring day, the demands are really not a lot different than what you would need for climbing, an expedition, or helicopter snowboarding in Alaska,” Marc Daniels, co-founder of New York-based label Isaora, tells Quartz. “It’s cold and wet.

The first products for Apple’s HomeKit are available today Siri is starting to take over the smart home. The first products that can be controlled by iPhones, iPads, and Apple Watches through HomeKit — Apple's smart home platform — are going on sale today, with others being announced for July. The products include light dimmers, air monitors, a thermostat, and an entire smart home hub. They can all be controlled through apps and Siri, allowing homes to be automated by voice command. Two companies launch today, three more arrive in July Two companies have products going on sale today: there's a pair of lighting kits from Lutron, and a hub for Insteon's own smart home system.