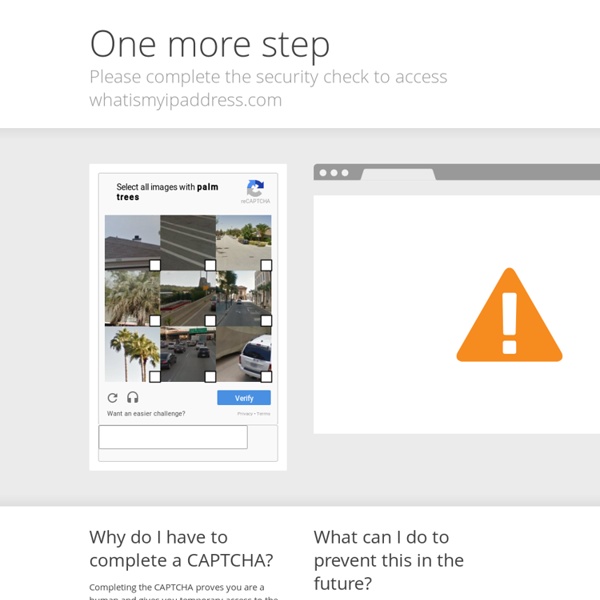 Your IP Address Is: Your IP Details: It's not personal — It's just your connection Welcome to whatismyIPaddress.com. Your IP address is something you probably rarely think about, but it's vitally important to your online lifestyle. Without an IP address, you wouldn't be able to get today's weather, check the latest news or look at videos online.

5 Terrifying Smartphone Hacks You Won't Believe Are Possible Sometimes we fail to appreciate the fact that today, right now, we're living in a sci-fi universe. The smartphone is a miracle of mathematics and engineering genius, converting a little over 4 ounces of inert matter into a Star Trek-level wondercomputer. But the downside of storing your entire world inside an ass-pocket-dwelling supercomputer is that there are always those who are itching to turn that technology against you in ways you'd never expect, like ... Whois - IP Address - Domain Name Lookup Your IP address is 198.27.81.81 Terms of Use All information from WHOIS service is provided 'as is'. We take no responsibility for any error or omission in WHOIS data. The data in WHOIS service is provided to you for your information only.

Simple Steps to Hack a Smartphone What kind of information do you have on your business card? Company name? Check. Your name and title? Check. Best Free Anonymous Surfing Services Read this article in Spanish (Español) Introduction This is the 21st century, the so-called Digital Age, an age where information is more public than it is private. The sheer growth and pervasiveness of the Internet have led to additional concerns over privacy issues for a great number of people. Dear online advertisers, stop following me. It’s creepy When I noticed an online ad promising "The Secrets to Long, Lush Asian Hair" recently, I rolled my eyes. I already have the secret to Asian hair: be Asian. This ad, however, would not be avoided.

I infected my Windows computer with ransomware to test RansomFree's protection Ransomware made a huge splash in 2016. There's no denying the motivation here: Money—as in virtually untraceable, digital cryptocurrency—has made this segment of the security realm nearly unstoppable. And if it continues to grow as projected, its reach will extend to more and more users, bringing in tens of millions of dollars for threat actors wishing to cash in on the epidemic. So what does this mean for your data if it's something that can't be stopped?

52 Hacking Videos DEC 2010 52 Hacking Videos DEC 2010ENGLISH | 1024x768 | tscc-AVI&SWF | 15fps - 450kbps | Mp3 128kbps - 48000Hz | 750.64 MBGenre: eLearning A Penetration Attack ReconstructedA Quick and Dirty Intro to Nessus using the Auditor Boot CD!Adding Modules to a Slax or Backtrack Live CD from WindowsAirplay replay attack - no wireless client requiredAnonym.OS LiveCD with build in Tor Onion routing and Privoxy BackTrack LiveCD to HD Installation Instruction Video Basic Nmap Usage! The Sky Is Rising Techdirt For years now, the legacy entertainment industry has been predicting its own demise, claiming that the rise of technology, by enabling easy duplication and sharing -- and thus copyright infringement -- is destroying their bottom line. If left unchecked, they say, it is not only they that will suffer, but also the content creators, who will be deprived of a means to make a living. And, with artists lacking an incentive to create, no more art will be produced, starving our culture.

Security Accounts Manager Title: Security Accounts Manager | Author: clark@hushmail.com | Last updated: 3rd April 2005 This article is based primarily on a local default setup of NT5.0 Professional or 2K (Windows 2000), however there maybe additional verified references to XP Professional and Server Editions. Much will apply across the NT range, but not all has been verified. AllAnonymity.com Hide IP Software IP Hider masks the real IP of a user, allowing him to browse all kind of pages without ever worrying that the ISPs or any other marketing tool is monitoring your surfing habits or spammers are attacking your computer. The simplest way to do this is to have traffic redirected through anonymous proxies. A proxy server is a kind of buffer between your computer and the Internet resources you are accessing. The data you request come to the proxy first, and only then it transmits the data to you. As a result, the websites see the IP address of the proxy server instead of your own IP address.

A free codec for free speech We haven't played with all of these plugins, so don't blame us if any of them eat your computer. Okay? Applications Asterisk Asterisk is an open-source PBX