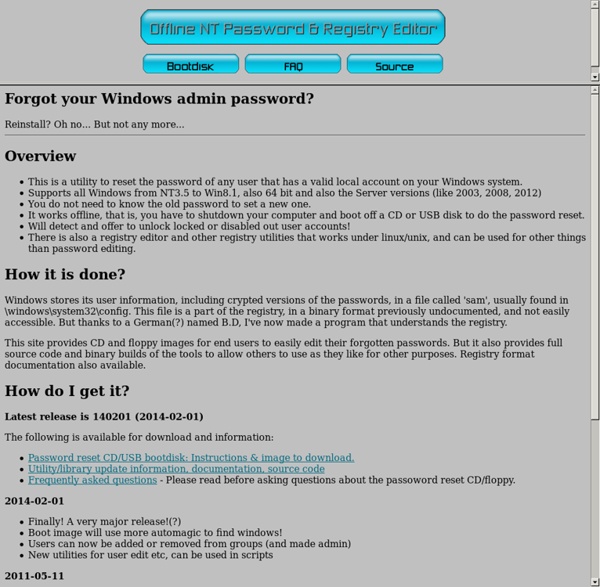 How to build the best free PC security suite Editor's note: This article was updated in full in January 2016. If you have a PC, you’re a target. You need security software. That's as true today as it was a decade ago, despite significant security improvements to Windows over the years. But you have a choice—you can either continue paying the security software vendor of your choice an annual fee for protection or you can take matters into your own hands and build your own suite of security tools using free products. Print Screen Capture Software with Special Effects, Annotation Tools and support for Windows 7, Vista and XP Alpha Transparency (Translucency). Create Annotated High-Fidelity Screen Shots... in Minutes, not Hours ! Make Your Screen Shots Stand Out, Impress Your Audience Have you ever wondered how to create screenshots such as this or this ? Most screen capture programs are fine if you just want to take an image of what's on your screen to include in your document or presentation. The hard stuff comes when you need to add annotations or special effects !

Password recovery procedure - Cisco Aironet 1100 or 1200 Access Point (AP) running Cisco IOS Software Introduction Password recovery procedure - Cisco Aironet 1100 or 1200 Access Point (AP) running Cisco IOS Software Core Issue Passwords on Cisco Aironet access points are not recoverable 7 Free Windows Password Recovery Tools (August 2016) Trinity Rescue Kit needs to be booted from a disc or USB stick to work. It includes many different tools, one of which is for password recovery. You can use Trinity Rescue Kit to clear a password entirely, making it blank, or to set a custom one. Some of you may find this program difficult to use because there isn't a graphical interface. How to encrypt everything on Windows, OS X, iOS, and Android The FBI’s inability to crack a terrorist’s iPhone 5c shows the strong protection you can get for your private information on a mobile device. That same encryption is also available on your computer, at least in some cases. Given the increasing access to personal and corporate data sought by the U.S. government, as well as by other politicians, unscrupulous businesses, and criminal hackers, people should up their game on what they protect. Fortunately, it's not hard to do. (But be sure to back up your data before you encrypt your devices, in case a power failure occurs during the encryption process and makes your data unavailable.)

Map It customizations and driving directions Outlook holds a mapping function to locate your contacts on the map. By default this will use the Bing Maps service but you can tweak Outlook to also use Google Maps or another mapping service. While the mapping function in Outlook is great to pinpoint your contacts, a common request is to also get driving directions to this contact. This guide will explain how you can customize the mapping feature to also act as a route planner. John the Ripper password cracker John the Ripper is free and Open Source software, distributed primarily in source code form. If you would rather use a commercial product tailored for your specific operating system, please consider John the Ripper Pro, which is distributed primarily in the form of "native" packages for the target operating systems and in general is meant to be easier to install and use while delivering optimal performance. This version integrates lots of contributed patches adding GPU support (OpenCL and CUDA), support for a hundred of additional hash and cipher types (including popular ones such as NTLM, raw MD5, etc., and even things such as encrypted OpenSSH private keys, ZIP and RAR archives, PDF files, etc.), as well as some optimizations and features. Unfortunately, its overall quality is lower than the official version's. Requires OpenSSL. There are unofficial binary builds (by John the Ripper user community members) for Windows, Linux, Solaris, and Mac OS X.

Jigsaw crypto-ransomware deletes more files the longer you delay paying Understanding how to buy bitcoins and pay ransomware authors for decryption keys is hard enough, yet some cybercriminals now expect their victims to do it in under an hour if they want all of their files back. A new ransomware program dubbed Jigsaw encrypts users' files and then begins to progressively delete them until the victim pays the equivalent of $150 in Bitcoin cryptocurrency. The ransomware deletes one file after the first hour has passed and then increases the number of files it deletes in every 60-minutes cycle. If no payment has been made within 72 hours, all remaining files will be deleted.

Reduce System Restore’s Disk Usage in Vista The System Restore feature in Windows Vista is very important to keep enabled, what with all the problems Vista users are having with compatibility. Even so, the disk usage can get out of hand if you install a large amount of software. Update: We’ve also covered how to limit system restore’s disk usage in Windows 7. The utility to change the settings is a command line utility called vssadmin. You’ll have to open a command prompt in administrator mode by entering cmd into the start menu and hitting Ctrl+Shift+Enter, or right-clicking the command prompt and selecting Run as Administrator. Show Allocated System Restore Size Security suites: Choosing the best one for you The old days of straightforward antivirus software packages are gone -- victim of a changing threat scene in which the dangers are more complex than ever and come from multiple sources. No longer are viruses and Trojans the only risks. Today you can also be victimized by phishing attacks, spyware, privacy invasions, social media scams and the possibility of losing your mobile device.

Remove Old Drivers After Upgrading to New Hardware If you are experiencing weird issues after upgrading your hardware, or you’ve just upgraded to the latest hardware device and aren’t seeing the performance you’d like, you might want to remove the old drivers which are still installed for the old hardware, even though you can’t normally see them in device manager. What you have to do is set a less-known flag to allow you to see non-present devices, and then launch device manager. You’ll then see the old devices in the list, and can uninstall the drivers for them. In Windows 7 or Vista, the first thing you’ll need to do is open a command prompt in administrator mode.

How to get rid of Flash Player Pro How to get rid of Flash Player Pro Some websites will ask you to install the "Fast player pro" plug-in in order to be able to view their content (text, photos, videos). By clicking the install button, you will notice the presence of several new icons on your desktop, a new home page/search engine for your browser and other unnecessary softwares! Share Wireless Internet Connection In Windows 7 Without Ad Hoc Last year we explained how you can create your own wireless ad hoc connection in Windows Vista, the same steps are applicable in Windows 7 as well. Last month we covered a tool called Connectify which help turn your Windows 7 into a virtual WiFi HotSpot. Using Connectify was much more secure, faster, and easier than to simply create an Ad-Hoc Connection.