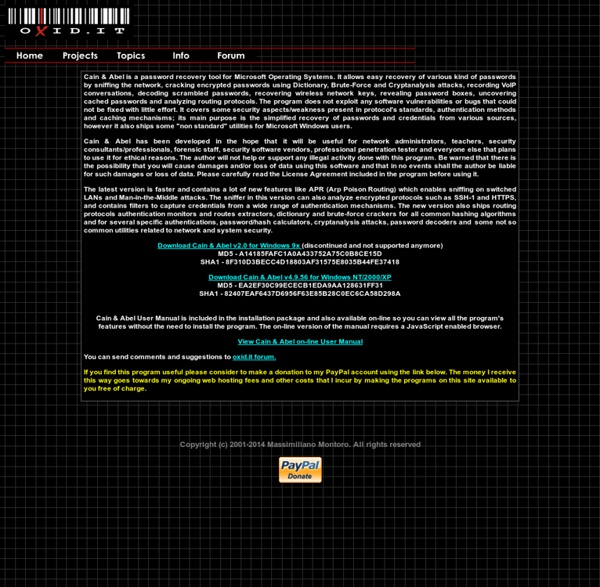 Cain & Abel is a password recovery tool for Microsoft Operating Systems. It allows easy recovery of various kind of passwords by sniffing the network, cracking encrypted passwords using Dictionary, Brute-Force and Cryptanalysis attacks, recording VoIP conversations, decoding scrambled passwords, recovering wireless network keys, revealing password boxes, uncovering cached passwords and analyzing routing protocols. The program does not exploit any software vulnerabilities or bugs that could not be fixed with little effort. It covers some security aspects/weakness present in protocol's standards, authentication methods and caching mechanisms; its main purpose is the simplified recovery of passwords and credentials from various sources, however it also ships some "non standard" utilities for Microsoft Windows users. The latest version is faster and contains a lot of new features like APR (Arp Poison Routing) which enables sniffing on switched LANs and Man-in-the-Middle attacks.

Video: PRTG Network Monitor - Smart Setup Welcome to the Paessler Video Tutorial on how to install PRTG. This tutorial is gonna cover the installation of PRTG and briefly the configuration guru. To start the installation, we have to doubleclick the installation file that you get either from the shop or from our website. WinMend Data Recovery 1.6.0 Portable » SoftLab-Portable.com - Portable Soft! WinMend Data Recovery is a Windows-based data recovery application. It recovers data on FAT12/ FAT16/FAT32/NTFS/NTFS5 partitions in Windows operating systems. It can be used to scan partitions in various hard drives, removable drives and even in data cards, and to search and recover deleted or missing files, files lost during formatting or due to partition exceptions. With unique recovery algorithm, WinMend Data Recovery can significantly improve the accuracy and speed of scanning, and ensure everything done in an absolutely safe condition without any negative impact on the system. Quick ScanWith this safe and high-speed scan engine, you can quickly locate and recover most deleted files.

How to Hack Your Wii for Homebrew Games and DVD Playback Want to play emulated games on your Wii? How about DVD playback? Here’s how to use the SmashStack exploit to hack your Wii with the latest system menu and enable all of that and more! And yes, in case you are wondering, this does work with the latest version 4.3 firmware update. The Infection File Popularity Contest - SpywareGuide Greynets Bl Ever wondered exactly how people who enjoy putting malicious files into the wide blue yonder ensure their bundles of joy are as attractive as possible to those who would happily download them? Well, I came across this program today and thought it was worth looking into. It dips into what's hot and current in the world of free downloads then uses that to ensnare as many potential victims as possible. How do they do it? The above program helps, for starters. Fire it up and you see this:

Where is Your Data? Part 2 and Part 3 are now available Part1: Five years after FTK 2 was first touted, and 1 year after FTK 2 was released, where is AccessData with the much maligned tool? Time Line: MoveOnBoot Free - Rename/Move/Delete Locked Files on Reboot If you ever faced with situation when you get an error message from Windows while trying to move, rename or delete locked folders or files, you know that it's very annoying and confusing. Windows doesn't provide any details in this case, so you have no idea what application holds the lock and how to proceed. With EMCO MoveOnBoot you can resolve any problems with locked files and folders with no headache or difficulties. Every time, when you get error message when, for example, you try to delete locked file or folder, you can launch EMCO MoveOnBoot and drag locked resource to it or, alternatively, choose locked file or folder using file system picker. Then you only need to select move, rename or delete operation to be executed with resource at the next system restart. When operations with locked files or folders are defined, you can continue your work and exit from EMCO MoveOnBoot or launch computer reboot immediately.

How to use Google for Hacking. Google serves almost 80 percent of all search queries on the Internet, proving itself as the most popular search engine. However Google makes it possible to reach not only the publicly available information resources, but also gives access to some of the most confidential information that should never have been revealed. In this post I will show how to use Google for exploiting security vulnerabilities within websites. The following are some of the hacks that can be accomplished using Google. 1. Hacking Security Cameras Black Hat ® Technical Security Conference: USA 2010 // Archives Caesars Palace Las Vegas, NV • July 28-29 Event AUDIO & VIDEO: The Source of Knowledge will be onsite to sell audio and video recordings of the Briefings sessions. Their booth will be located outside of the Fourth Floor (Promenade Level), Emperor's Ballroom, or click here to visit the SOK site: order media »

TRESOR TRESOR (recursive acronym for "TRESOR Runs Encryption Securely Outside RAM", and also the German word for a safe) is a Linux kernel patch which provides CPU-only based encryption to defend against cold boot attacks on computer systems by performing encryption outside usual random-access memory (RAM). It is one of two proposed solutions for general-purpose computers (the other uses CPU cache for the same purpose[1]), was developed from its predecessor AESSE, presented at EuroSec 2010 and presented at USENIX Security 2011.[2] The authors state that it allows RAM to be treated as untrusted from a security viewpoint without hindering the system. A 2012 paper called TRESOR-HUNT showed how a DMA attack can break this system, by injecting code that would invisibly function at ring 0 (the highest privilege level), which would allow it to read the keys and transfer them to usual memory. The paper also proposed ways to mitigate against such attacks.[3] Thanks for the feedback! Motivation[edit]