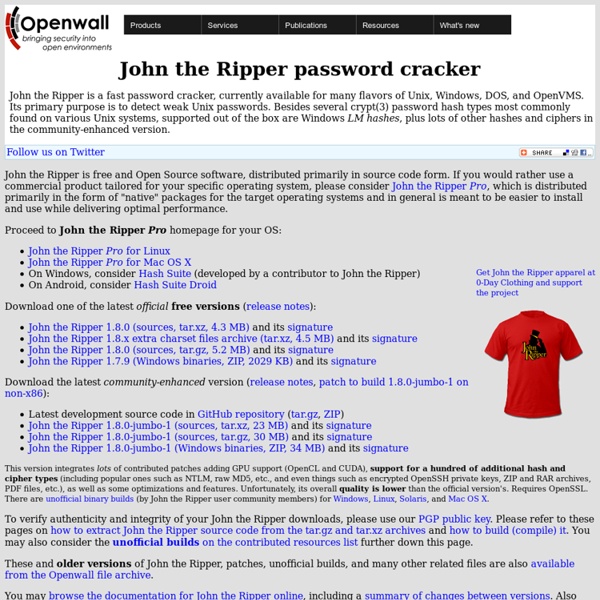 John the Ripper is free and Open Source software, distributed primarily in source code form. If you would rather use a commercial product tailored for your specific operating system, please consider John the Ripper Pro, which is distributed primarily in the form of "native" packages for the target operating systems and in general is meant to be easier to install and use while delivering optimal performance. This version integrates lots of contributed patches adding GPU support (OpenCL and CUDA), support for a hundred of additional hash and cipher types (including popular ones such as NTLM, raw MD5, etc., and even things such as encrypted OpenSSH private keys, ZIP and RAR archives, PDF files, etc.), as well as some optimizations and features. Unfortunately, its overall quality is lower than the official version's. Requires OpenSSL. There are unofficial binary builds (by John the Ripper user community members) for Windows, Linux, Solaris, and Mac OS X.

Nessus From the beginning, we've worked hand-in-hand with the security community. We continuously optimize Nessus based on community feedback to make it the most accurate and comprehensive vulnerability assessment solution in the market. 20 years later and we're still laser focused on community collaboration and product innovation to provide the most accurate and complete vulnerability data - so you don't miss critical issues which could put your organization at risk. Today, Nessus is trusted by more than 27,000 organizations worldwide as one of the most widely deployed security technologies on the planet - and the gold standard for vulnerability assessment.

Create a Shiny Earth with Photoshop 3D Layers In this tutorial I'll show you how to create a shiny planet icon using the 3D features of Photoshop CS4 Extended. This will cover basic information about 3D layers and texture maps. Let's get started! Linux and Open source Understanding Nmap Commands: In depth Tutorial with examples Article by James Hawkins As we all know, Nmap (Network Mapper) is a stealth port scanner widely used by network security experts (including forensics & Pen-testing Experts). In this article we’ll see the different types of Nmap Scans, its techniques, understanding the purpose and goals of each scan , its advantages or disadvantages over other scanning tools, which could be better at evading firewalls & IDS (To a certain extent) and much more. In this first part, I have made my best to explain the basic scanning techniques, Host discovery options, port scanning options, techniques used in detecting Operating system & services running on the system. i also give Nmap as already installed on your system. Let’s start with one of the most basic and default scan, the one without using any parameters.

Wifite Get the latest version on Github What's new in this version: support for cracking WPS-encrypted networks (via reaver) 2 new WEP attacks more accurate WPA handshake capture various bug fixes Version 2 does not include a GUI, so everything must be done at the command-line. Wifite was mentioned in the New York Times' article "New Hacking Tools Pose Bigger Threats to Wi-Fi Users" from February 16, 2011. Realistic Smoke Effect Photoshop Tutorials Adobe Photoshop, as we all know is rightfully regarded as the Swiss knife of designers all around the world. With Photoshop, you can literally create all kinds of illustrations that you previously only dream about! With this fantastic tool, you can virtually create any effect you want. It’s like an infinite canvas of your dreams. If you have the imagination, sky is the limit. So today, we are going to tell you how to stretch this tool to maximize its limits!