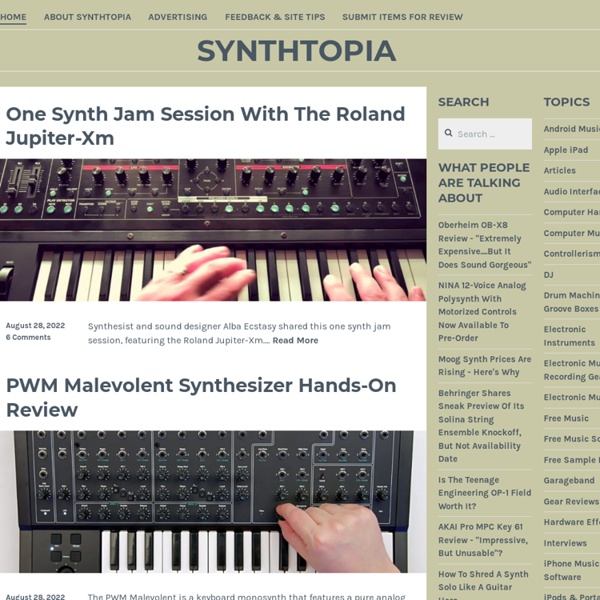 Old Part Day: Voltage Controlled Filters For thirty years, the classic synths of the late 70s and early 80s could not be reproduced. Part of the reason for this is market forces — the synth heads of the 80s didn’t want last year’s gear. The other part for the impossibility to build new versions of these synths was the lack of parts. Synths such as the Prophet 5, Fairlight CMI, and Korg Mono/Poly relied on voltage controlled filter ICs — the SSM2044 — that you can’t buy new anymore. If you can source a used one, be prepared to pay $30. New old stock costs about $100. vintagesynth.com Interactive Timeline Travel through time: a complete and interactive timeline of all the synthesizers, drum machines, samplers, and software featured on this site. Glossary of Synthesizer Terms A useful reference guide to help you better understand much of the synthesizer jargon used when talking about synthesizers. Studio Set-up Guides For quick help setting up a synthesizer studio and connecting vintage and MIDI gear.

Pluggo Technology Moves to Max for Live Effective immediately, Cycling ’74 will discontinue sales of prebuilt Max-based audio plug-in packages. This includes Pluggo, Mode, Hipno, and UpMix. We will still continue to support current users as best we can, but there will be no further development on either the plug-in packages or their supporting technology. A Tour and Performance of my DIY Modular Synthesizer – cb fishes A few months ago I started dabbling in electronics with the intention of building an analog modular synthesizer. I had my doubts that I could create something that worked, let alone something useful and musical. But yesterday I placed a plywood panel in the last slot on my second rack, effectively filling up the two 19″ x 12″ pallet wood cases I built to house my synthesizer. I thought this would be a fitting time to stop soldering for a moment and share some details– and sounds– of the instrument I built. Not only does it work, I think it sounds rad.

Embedded Systems/PIC Microcontroller Manufactured by Microchip, the PIC ("Programmable Intelligent Computer" or "Peripheral Interface Controller" ) microcontroller is popular among engineers and hobbyists alike. PIC microcontrollers come in a variety of "flavors", each with different components and capabilities. Many types of electronic projects can be constructed easily with the PIC family of microprocessors, among them clocks, very simple video games, robots, servo controllers, and many more. The PIC is a very general purpose microcontroller that can come with many different options, for very reasonable prices.

Dubstep Towards the end of the 2000s and into the early 2010s, the genre started to become more commercially successful in the UK, with more singles and remixes entering the music charts. Music journalists and critics also noticed a dubstep influence in several pop artists' work. Around this time, producers also began to fuse elements of the original dubstep sound with other influences, creating fusion genres including future garage, the slower and more experimental post-dubstep, and the harsher electro house and heavy metal influenced brostep, the latter of which greatly contributed to dubstep's rising mainstream popularity in the United States.[9] Characteristics Musical score of the above recording. The music website Allmusic has described Dubstep's overall sound as "tightly coiled productions with overwhelming bass lines and reverberant drum patterns, clipped samples, and occasional vocals