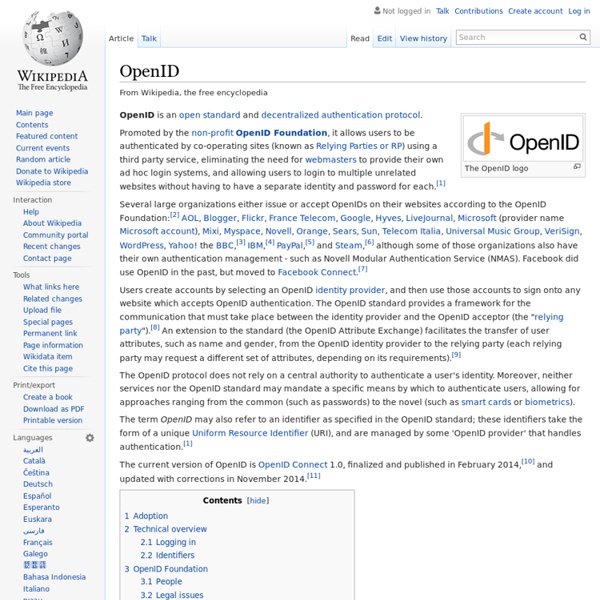 OpenID is an open standard and decentralized authentication protocol. Promoted by the non-profit OpenID Foundation, it allows users to be authenticated by co-operating sites (known as Relying Parties or RP) using a third party service, eliminating the need for webmasters to provide their own ad hoc login systems, and allowing users to login to multiple unrelated websites without having to have a separate identity and password for each.[1] Users create accounts by selecting an OpenID identity provider, and then use those accounts to sign onto any website which accepts OpenID authentication. The OpenID protocol does not rely on a central authority to authenticate a user's identity. Moreover, neither services nor the OpenID standard may mandate a specific means by which to authenticate users, allowing for approaches ranging from the common (such as passwords) to the novel (such as smart cards or biometrics). Adoption[edit] Technical overview[edit] Logging in[edit] Identifiers[edit] People[edit]

BPMN Business Process Modeling Notation (BPMN) web site: www.bpmn.org BPMN was developed as part of the BPMI consortium. Identity management In computing, identity management (IdM) describes the management of individual principals, their authentication, authorization,[1] and privileges within or across system and enterprise boundaries[2] with the goal of increasing security and productivity while decreasing cost, downtime and repetitive tasks.[3] The terms "Identity Management" and "Identity and Access Management" (or IAM) are used interchangeably in the area of Identity access management, while identity management itself falls under the umbrella of IT Security.[4] Identity-management systems, products, applications and platforms manage identifying and ancillary data about entities that include individuals, computer-related hardware and applications. Definitions[edit]

XACML XACML stands for eXtensible Access Control Markup Language. The standard defines a declarative access control policy language implemented in XML and a processing model describing how to evaluate access requests according to the rules defined in policies. As a published standard specification, one of the goals of XACML is to promote common terminology and interoperability between access control implementations by multiple vendors. XACML is primarily an Attribute Based Access Control system (ABAC), where attributes (bits of data) associated with a user or action or resource are inputs into the decision of whether a given user may access a given resource in a particular way.

OAuth For MediaWiki's (the software used by Wikipedia) OAuth support, see mw:Help:OAuth OAuth is an open standard for authorization, commonly used as a way for Internet users to log into third party websites using their Microsoft, Google, Facebook or Twitter accounts without exposing their password.[1] Generally, OAuth provides to clients a 'secure delegated access' to server resources on behalf of a resource owner. It specifies a process for resource owners to authorize third-party access to their server resources without sharing their credentials. Designed specifically to work with Hypertext Transfer Protocol (HTTP), OAuth essentially allows access tokens to be issued to third-party clients by an authorization server, with the approval of the resource owner. The third party then uses the access token to access the protected resources hosted by the resource server.[2]

TCP/IP model The Internet protocol suite is the computer networking model and set of communications protocols used on the Internet and similar computer networks. It is commonly known as TCP/IP, because its most important protocols, the Transmission Control Protocol (TCP) and the Internet Protocol (IP), were the first networking protocols defined in this standard. Often also called the Internet model, it was originally also known as the DoD model, because the development of the networking model was funded by DARPA, an agency of the United States Department of Defense. Guillemot Kayaks For those who prefer French, André Rose has translated this. What could be easier than stability? Just make the boat wide and it will be stable … right?

Buzzlogic San Francisco, Calif. (November 3, 2011)BuzzLogic, an online media company that specializes in emotive-based advertising, announced today that it has changed its name to Twelvefold Media. The word twelvefold signifies a substantial increase in size, degree or amount and centers upon Spectrum, the companys recently launched, emotive-based online advertising platform. Spectrum introduced a new definition of relevance for targeting ad messages. The technology moves beyond simple context of keywords on a page to reflect the influence, authority and emotional mindset a piece of content creates with its readers. Identity, Authentication, and Provisioning Them Online Christina jotted down some thoughts on indentity on a flight to SF and I read them this morning. In her post, she references Ev's excellent post on the same topic from a while back. So I went on a bike ride as the sun rose over the east end of long island and thought a bit about all of this. Before going on, I'd like to emphasize that these thoughts are mine and mine only. Nobody has seen this post before publishing other than me, including my partners and our portfolio companies. It does not represent the opinions of any company I and/or our firm are involved in.