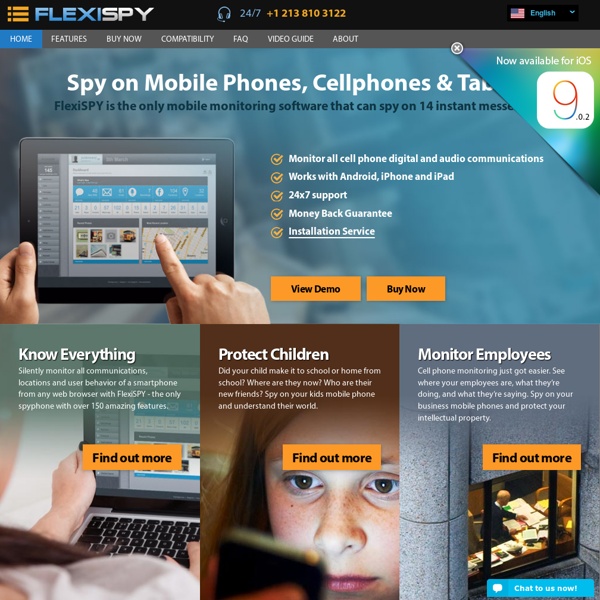 How to Tell if your Cell Phone is Being Tracked, Tapped or Monitored by Spy Software - SpyzRus.net There are a few signs that may help you find out if your cell phone has spy software installed and that it is being tracked, tapped or monitored in some way. Quite often these signs can be quite subtle but when you know what to look out for, you can sometimes find out if your cell phone is being spied on. This article series will deal with How to Find installed Spy Phone Software and then How to Remove Spy Software followed by How to Secure your Cell Phone. This guide should help for all types of Smartphone including Android and for the iPhone there are a few extra tips. It seems that almost everyone is obsessed with cell phones, from young kids’ right through to the elderly. Babies seem to be the only ones missing out so far! I know that it might seem strange to younger readers, but back in the day, cell phones were only used to make phone calls (often quite unreliably). Is Your Mobile Phone Being Monitored? spy software apps. Detecting Cell Phone Spy Software

The Five Biggest Threats to Your Kids’ Privacy, and What You Can Do About Them Remember back in school, when your teachers warned that everything you did would go on your permanent record? It turns out your teachers have become right. That permanent record is the Internet. It’s hard to be a fully functioning adult in 2014 and not leave behind a digital trail. Now imagine how hard it is for your kids, who have never known a world where the net did not exist. From the moment they emerge from the womb, they’re generating data, which is then eagerly absorbed and stored by Internet companies, government agencies and some evil no-goodniks. Despite federal laws prohibiting the collection of data from children under the age of 13, dossiers are constantly being created about your kids, whether it’s Google capturing their search histories, advertisers creating profiles of their interests, or their grandparents tagging photos of them on Facebook. Canadian Singles Find New Ways To Meet UrthBox Healthy Snack Boxes. Math Practice - Ages 5-15 Questions, complaints, kudos?

How can I protect my Windows PC against malware? | Technology I have just ordered a Windows PC based on your recommendation, and now ask for your advice on anti-spyware and virus protection software for it. Any help you could offer me would be greatly appreciated. Mary Mass-market malware is a numbers game, played mostly with familiar off-the-shelf exploit kits (EKs). I ran into one yesterday when the Labour party press team unintentionally ("we were hacked") tweeted a link to an owl video that wanted me to install a "Flash update" that contained viruses. Just doing the right things is usually enough to keep more than 98% of Windows PCs malware free, barring accidents. Keep up to date The vast majority of malware infections exploit security holes that have already been fixed, so the most important part of PC hygiene is to keep all your software up to date. Some other programs – including the Firefox and Google Chrome browsers – will also install patches automatically. Further, I strongly recommend installing Secunia's Personal Software Inspector.

How to Protect Your Computer from Hackers, Spyware and Viruses This article has been inspired by a situation I ran into while visiting a cousin in India. Since I’m in the IT field, she asked me to take a look at her computer since it was acting “funny”. The “funny” part was that the computer would automatically restart whenever you tried to install ANY software onto it or download any program from the Internet. The first thing I noticed was that there was no anti-virus software installed on the computer, so my first goal was to install an anti-virus program and check for viruses. Most of the viruses on the computer were hidden in files that had been downloaded off the Internet: songs, videos, and movies. This is by no means a comprehensive list, so if you have any suggestions, please feel free to comment and I’ll add them on! 1. Avira – Avira has a free version that was ranked #3 in 2014 for detecting viruses. Bitdefender – Bitdefender had the second highest detection rate and they also have a free edition. 2. 3. 4. 5. 6. 7. 8. 9. 10. 11. 12.