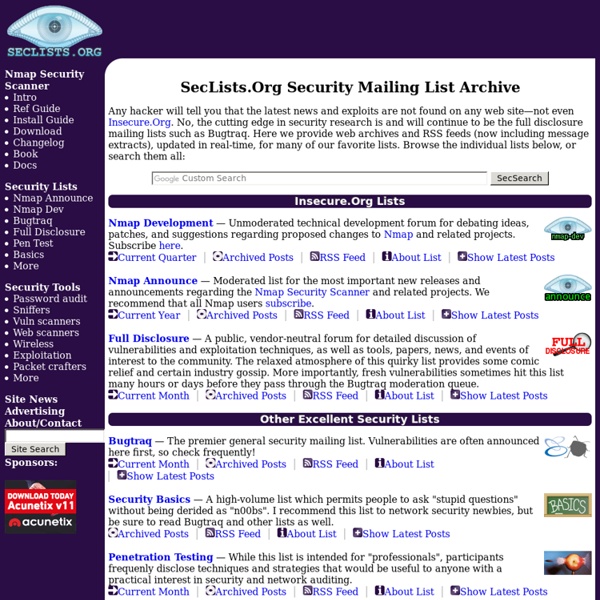 Probably the Best Free Security List in the World. Security List Index Select a Security Category: All Items Keys Discontinued or not updated recently (for at least three years). Black Hat: Top 20 hack-attack tools Network World - Turn someone else’s phone into an audio/video bug. Check. Use Dropbox as a backdoor into corporate networks. Check. Experience Manager Mobile Help For the complete experience, please enable JavaScript in your browser. Thank you! See plans for: businesses photographers students Adobe for enterprise All products Creative Cloud Hardware-based security more effective against new threats With software security tools and network vulnerabilities constantly being targeted by hackers, securing hardware components will grow in importance given it is more secure and cybercriminals will find it difficult to alter the physical layer for their purposes. Patrick Moorhead, president and principal analyst of Moor Insight and Strategy, said hardware-based security is more secure than software tools such as antivirus since it cannot be altered. Hardware-based security refers to safeguarding the computer using components such as processors. An RSA spokesperson added the physical layer eliminates the possibility of malware, such as virtual rootkits, from infiltrating the operating system and penetrating the virtualization layer.

The Web's #1 Hacking Tools Directory - with tutorial videos! Hacking Tools Directory with Video Tutorials By Henry Dalziel | Information Security Blogger | Concise Courses We are big fans of blogging about Hacker Tools – for one major reason: if you are serious about working in cyber security you need to be able to use these tools like a boss. Hacking tools are what boxing gloves are to a boxer or what a spanner is to a plumber. A pentester (or ethical hacker) can be judged by their ability to use these tools, frameworks and programs, so get to know them!

Steps to Configure FileVault Tool (VLT) in CQ The FileVault tool (VLT) is a tool developed by Adobe that maps the content of a CRX/AEM instance to your file system or we can say that it is used to map windows file system structure to CRX/AEM file system Structure. The VLT tool has similar functions as source control system client (such as a Subversion (SVN) client), providing normal check-in, check-out and management operations, as well as configuration options for flexible representation of the project content. NOTE: If you are using the FileVault Tool(VLT) in a CRX-only instance, the default URL for CRX is localhost:4502. Use that instead of the CQ default URL. In AEM there are two ways of syncing content between eclipse and crx de repository:-

Black Hat USA 2014 - Arsenal Returning bigger than ever for 2014, Black Hat is pleased to once again present Arsenal--a Tool/Demo area where independent researchers and the open source community will showcase some awesome weapons. See below for the full list and descriptions of each of these tools. Hours and Location: August 6, 2014 | 10:00 - 18:00 | Breakers JK August 7, 2014 | 10:00 - 18:00 | Breakers JK Android Device Testing Framework The Android Device Testing Framework ("dtf") is a data collection and analysis framework to help individuals answer the question: "Where are the vulnerabilities on this mobile device?" Hacker Tools (Top Ten List of 2016) Nmap, Wireshark, Metasploit Welcome to our Hacker Tools list of 2016… Since 2014 we’ve listed the web’s favorite hacking/ pentesting tools as used by hackers, geeks and security engineers. This list sprung to life when we organized an online poll that was very well received and the below recommended tools are a result of what our community voted as the ‘Top Ten List of Hacking Tools’.