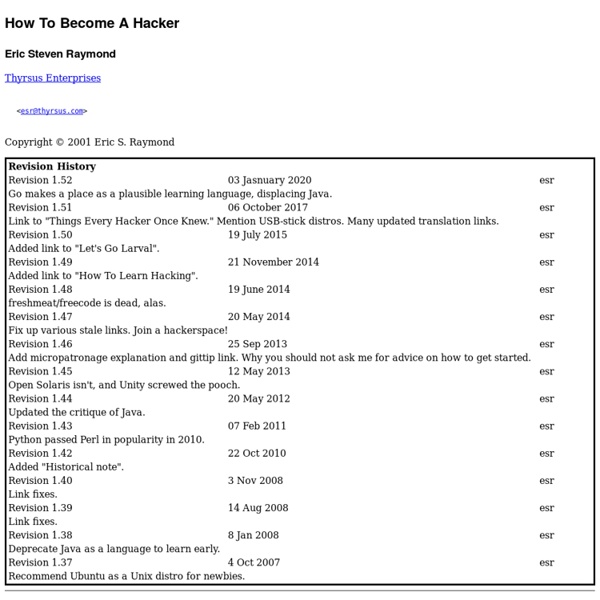 Copyright © 2001 Eric S. Raymond As editor of the Jargon File and author of a few other well-known documents of similar nature, I often get email requests from enthusiastic network newbies asking (in effect) "how can I learn to be a wizardly hacker?". Back in 1996 I noticed that there didn't seem to be any other FAQs or web documents that addressed this vital question, so I started this one. A lot of hackers now consider it definitive, and I suppose that means it is. Still, I don't claim to be the exclusive authority on this topic; if you don't like what you read here, write your own. If you are reading a snapshot of this document offline, the current version lives at Note: there is a list of Frequently Asked Questions at the end of this document. Numerous translations of this document are available: ArabicBelorussianBulgarianChinese, Czech. The five-dots-in-nine-squares diagram that decorates this document is called a glider. If you want to be a hacker, keep reading. 1. 2. 3. 5. 2. 3.

How To Ask Questions The Smart Way In the world of hackers, the kind of answers you get to your technical questions depends as much on the way you ask the questions as on the difficulty of developing the answer. This guide will teach you how to ask questions in a way more likely to get you a satisfactory answer. Now that use of open source has become widespread, you can often get as good answers from other, more experienced users as from hackers. 70 Things Every Computer Geek Should Know. The term ‘geek’, once used to label a circus freak, has morphed in meaning over the years. What was once an unusual profession transferred into a word indicating social awkwardness. As time has gone on, the word has yet again morphed to indicate a new type of individual: someone who is obsessive over one (or more) particular subjects, whether it be science, photography, electronics, computers, media, or any other field.

Dal Sabzi for Aatman: Gayatri Mantra The Gayatri Mantra was traditionally given from the Guru Master to the disciple, while standing mid-stream. Look at the darkness. Visualize the sun rising. Offer water to the sun. The story goes that once the Devas, the Shining Ones wanted to learn the secrets of the Universe. Since learning about the Scientific aspect 'atoms' etc. did not quite work out, they went to the Lord.

ANONYMITY & PRIVACY [ English | German ] Protection of Privacy on the Internet JAP (called JonDo in the scope of the commercial JonDonym anonymous proxy servers - AN.ON remains free of charge) makes it possible to surf the internet anonymously and unobservably. Without Anonymization, every computer in the internet communicates using a traceable Address. The Cuckoo's Egg (book) Summary[edit] Clifford Stoll (the author) managed some computers at Lawrence Berkeley National Laboratory in California. One day, in August 1986, his supervisor (Dave Cleveland) asked him to resolve a USD$0.75 accounting error in the computer usage accounts. He traced the error to an unauthorized user who had apparently used up 9 seconds of computer time and not paid for it, and eventually realized that the unauthorized user was a hacker who had acquired root access to the LBL system by exploiting a vulnerability in the movemail function of the original GNU Emacs. Over the next ten months, Stoll spent a great deal of time and effort tracing the hacker's origin.

How To Learn Hacking Copyright © 2014 Eric S. Raymond The “hacking” we'll be talking about in this document is exploratory programming in an open-source environment. If you think “hacking” has anything to do with computer crime or security breaking and came here to learn that, you can go away now. There's nothing for you here. Hacking is primarily a style of programming, and following the recommendations in this document can be an effective way to acquire general-purpose programming skills. Hacking Basics This tutorial is for information purposes only, and I do not endorse any of the activities discussed within this guide. I nor anyone hosting this guide can be held responsible for anything you do after reading this. What you do with your day lies on your shoulders. Here with I am creating an Index.. 1.