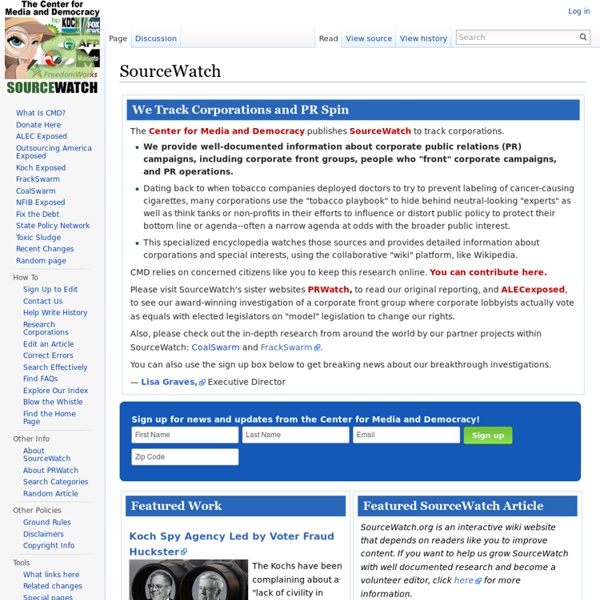 Koch Spy Agency Led by Voter Fraud Huckster The Kochs have been complaining about a "lack of civility in politics" as they seek to boost their public image--but one of their top operatives helped propel perhaps the most egregious case of race-baiting voter fraud hucksterism in recent years. At the same time that the Kochs have been on a PR blitz, publicly spinning an image of themselves as well-intentioned patriots trying to make the world a better place and decrying "character assassination," they've been quietly ramping up a clandestine surveillance and intelligence gathering operation focused on their perceived political enemies, Ken Vogel reports at Politico. At the helm of this "competitive intelligence" operation is a man named Mike Roman, Vice President of Research for Kochs' Freedom Partners and who was paid $265,000 last year, according to Freedom Partners' recent tax filing. Read the rest of this item here. Wisconsinites Reject the "Eric O'Keefe Session" of the Legislature Rep. Related:  Antropologia, etnologia, sociologia

Vancouver Hack Space - 45 W. Hastings Street, Vancouver, BC On The Media: This Week The dark legacy of Carlos Castaneda The godfather of the New Age led a secretive group of devoted followers in the last decade of his life. His closest "witches" remain missing, and former insiders, offering new details, believe the women took their own lives. Salon/April 12, 2007 By Robert Marshall For fans of the literary con, it's been a great few years. If this name draws a blank for readers under 30, all they have to do is ask their parents. Under don Juan's tutelage, Castaneda took peyote, talked to coyotes, turned into a crow, and learned how to fly. Castaneda was viewed by many as a compelling writer, and his early books received overwhelmingly positive reviews. The books' status as serious anthropology went almost unchallenged for five years. In spite of this exhaustive debunking, the don Juan books still sell well. Today, Simon and Schuster, Castaneda's main publisher, still classifies his books as nonfiction. Some former Castaneda associates suspect the missing women committed suicide. But there were rewards.

Comments from Left Field Cyborg Anthropology Martin Landau Martin Landau [IPA:landau] (born June 20, 1928)[1] is an American film and television actor. His career started in the 1950s, with early film appearances including a supporting role in Alfred Hitchcock's North by Northwest (1959). He played regular roles in the television series Mission: Impossible (for which he received several Emmy Award nominations) and Space: 1999. Early life[edit] Career[edit] Cartoonist[edit] Film, television and theater[edit] Landau in his role as Rollin Hand in Mission: Impossible Landau played the role of master of disguise Rollin Hand in Mission: Impossible, becoming one of the television series' better-known stars. In recognition of his services to the motion picture industry, Martin Landau has a star on the Hollywood Walk of Fame at 6841 Hollywood Boulevard. Acting coach[edit] Encouraged by his own mentor, Lee Strasberg, Landau has also taught acting. Personal life[edit] Filmography[edit] Selected television[edit] See also[edit] References[edit] Bibliography[edit]