Home - Plotter : 6 Steps (with Pictures) - Instructables. I will be showing you two ways by which you can do this. 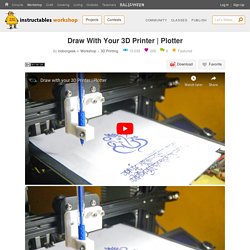 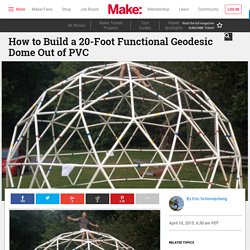 The idea of building our own shelter fascinates us, but for the average handyman, where do you start? A geodesic dome made of PVC may be the most cost-effective method of building a structurally solid yet transportable shelter, and it’s possible to build one in a single day. At Maker Faire 2014 in New York City, the Sketchup team did just that. Why? We wanted something that was easy and fun to assemble, but it also needed to be impressive, yet duplicable by anyone with just basic tools.

We’ll show you how we built ours, and how you can use Sketchup to easily design and build your own, of any size. To begin, you can see our Maker Faire domes in action here and in the video below The History of the Geodesic Dome. Progetto: modding videoproiettore con lampada LED. MODDING. Cat Magnet by GrkManga. Polargraph Drawing Machine by Nboorady. A polargraph drawing machine can draw practically anything you want. 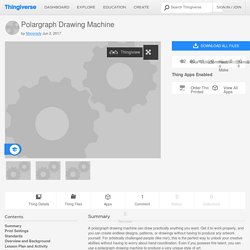 Get it to work properly, and you can create endless designs, patterns, or drawings without having to produce any artwork yourself. For artistically challenged people (like me!) , this is the perfect way to unlock your creative abilities without having to worry about hand coordination. Even if you possess this talent, you can use a polargraph drawing machine to produce a very unique style of art. To view detailed, step-by-step instructions, visit my documentation website: Printer Brand: POLAR DRAWBOT by daGHIZmo. This is my redesign of mechanical parts used to build a Wallmount Polar Drawbot . I built mine collecting and mixing various information I found available on the web. The electronics and firmware comes from Dan Royer's "Makelangelo project" (Makelangelo SOFTWARE - Makelangelo FIRMWARE ) using V1 version of Adafruit motor shield but I used an DK Electronics motor shield I made several test trials using parts found ready around many projects, but none seem to match the requirements I would like to obtain.

So I completely redesign all parts. Plastics Contest. Sponsor. 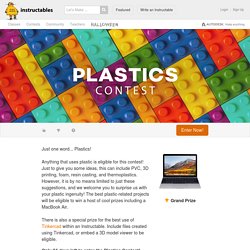 The Instructables Plastic Contest (the "Contest") is an online contest with skill, ability and knowledge components that is sponsored by Autodesk, Inc., a Delaware corporation having its principal office at 111 McInnis Parkway, San Rafael, CA 94103, USA ("Sponsor"), in connection with the Instructables service and website, www.instructables.com, (the "Sponsor Site"). The Contest is co-sponsored by the company or companies listed here, if any (each, a "Co-Sponsor"): The Contest is governed by these Official Rules (these "Rules"). For any questions regarding the Contest, the Sponsor may be contacted by email at [service@instructables.com] or by mail at the address identified in Section B.16 ("Winner's List; Mailing List") below.Overview; Object of the Contest. The object of the Contest is to create an Instructables project that meets the format, content and other requirements identified in Section A.5 ("How to Enter") below. 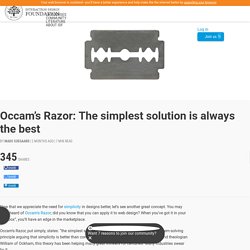 You may have heard of Occam’s Razor; did you know that you can apply it to web design? When you’ve got it in your “toolbox”, you’ll have an edge in the marketplace. Occam’s Razor, put simply, states: “the simplest solution is almost always the best.” Fai da te - NonSoloRiciclo. Comunicazioni. Scrigno degli attrezzi: strumenti utili per la xilografia! A Beginner's Guide To Stirling Engines. Last year I was an IB student in the MYP program. 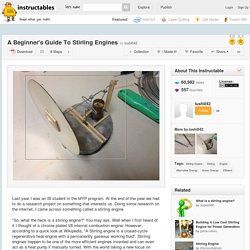 At the end of the year we had to do a research project on something that interests us. Doing some research on the internet, I came across something called a stirling engine. "So, what the heck is a stirling engine? " You may ask. Well when I first heard of it I thought of a chrome plated V8 internal combustion engine. The next few steps will get more into the history and applications of stirling engines. If history and long boring back stories aren't your thing skip over to the build at Step 4. Duct Tape Speakers. Building the Paper Arrow. 12 Impressive Paper Airplanes. CNC Laser Cutter Journey. To save on money and material I decided to build a wooden version of my CNC machine to see what I would have to invest to get it working. 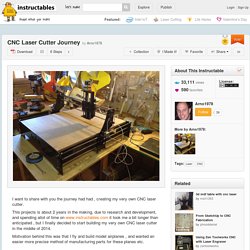 I ordered some some parts from iTead Studio to get the ball rolling. 1. 3 x stepper motors - 2. 3 x stepper motor driver (Big Easy Driver) - Due to some stock shortages, I got the rest from www.sainsmart.com 1. 1 x UNO R3 Arduino board - Progetto Polymath - Matematica e... Origami. Mini Staple Sailplane. This instructable, inspired by the proliferation of micro-sized paper airplanes, contains instructions for building a miniature sailplane out of paper and a staple. 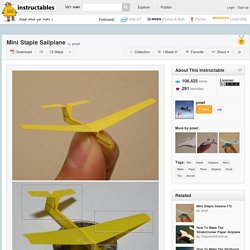 It has a fuselage measuring 40 millimeters, a wingspan of 60 millimeters, and a height of 7 millimeters. Despite its small size, it has surprisingly good aerodynamics, which is due to the fact that it shares similar dimensions and attributes with full-size sailplanes. This includes: Paper Airplane - Glider. Gliders. A glider is a special kind of aircraft that has no engine. 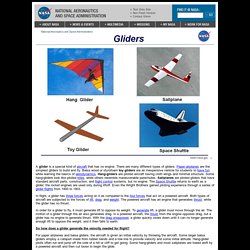 There are many different types of gliders. Paper airplanes are the simplest gliders to build and fly. Balsa wood or styrofoam toy gliders are an inexpensive vehicle for students to have fun while learning the basics of aerodynamics. Hang-gliders are piloted aircraft having cloth wings and minimal structure. Aerei di Carta. WhiteWings. Cento cose: la tecnologia utile. 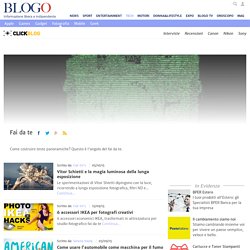 Chirio.com Vendita on-line sistemi illuminazione a led light designer lighting design illuminazione negozi progettazione elettronica electronics design illuminazione a led risparmio energetico switching power supply. Fresh hacks every day. What do you get when you take a flight case from Harbor Freight, fill it up with random electronics junk, and send it off to a stranger on the Internet? The travelling hacker box. It’s a project I’m putting together on hackaday.io to emulate a swap meet through the mail. The idea is simple – take a box of random electronics junk, and send it off to a random person on hackaday.io. Repair Manuals for Every Thing. Galleria dello Scienziato Dilettante - Attività diverse.