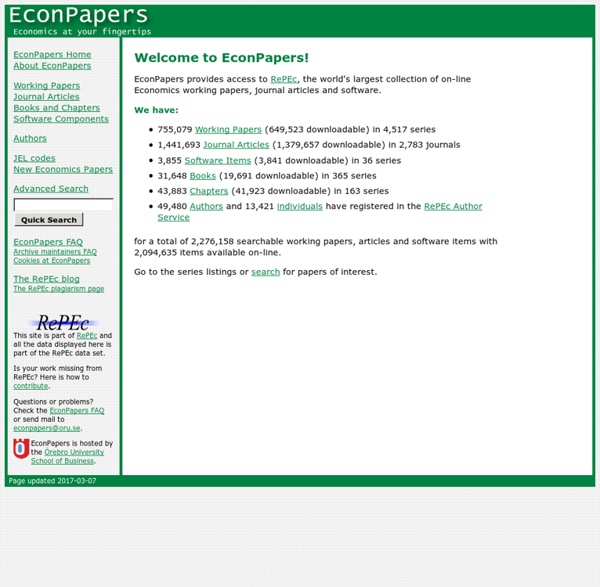 BASE (Bielefeld Academic Search Engine): Hit List Loading Error: Cannot Load Popup Box Mobile | A A A | John Kenneth Galbraith John Kenneth "Ken" Galbraith, OC (properly /ɡælˈbreɪθ/ gal-BRAYTH, but commonly /ˈɡælbreɪθ/ GAL-brayth; 15 October 1908 – 29 April 2006) was a Canadian and, later, American economist, public official, and diplomat, and a leading proponent of 20th-century American liberalism. His books on economic topics were bestsellers from the 1950s through the 2000s, during which time Galbraith fulfilled the role of public intellectual. In macro-economical terms he was a Keynesian and an institutionalist.[2] Galbraith was a long-time Harvard faculty member and stayed with Harvard University for half a century as a professor of economics.[3] He was a prolific author and wrote four dozen books, including several novels, and published more than a thousand articles and essays on various subjects.

Project Gutenberg Paul Krugman Paul Robin Krugman (born February 28, 1953) is an American economist, Professor of Economics and International Affairs at the Woodrow Wilson School of Public and International Affairs at Princeton University, Centenary Professor at the London School of Economics, Distinguished Scholar at the Luxembourg Income Study Center at the CUNY Graduate Center, and an op-ed columnist for The New York Times.[2][3] In 2008, Krugman won the Nobel Memorial Prize in Economic Sciences for his contributions to New Trade Theory and New Economic Geography. According to the prize Committee, the prize was given for Krugman's work explaining the patterns of international trade and the geographic concentration of wealth, by examining the effects of economies of scale and of consumer preferences for diverse goods and services. Krugman is known in academia for his work on international economics (including trade theory, economic geography, and international finance),[5][6] liquidity traps, and currency crises.

Paul Samuelson Paul Anthony Samuelson (May 15, 1915 – December 13, 2009) was an American economist, and the first American to win the Nobel Memorial Prize in Economic Sciences. The Swedish Royal Academies stated, when awarding the prize, that he "has done more than any other contemporary economist to raise the level of scientific analysis in economic theory".[1] Economic historian Randall E. Parker calls him the "Father of Modern Economics",[2] and The New York Times considered him to be the "foremost academic economist of the 20th century".[3] He entered the University of Chicago at age 16, during the depths of the Great Depression, and received his PhD in economics from Harvard.

Joseph Stiglitz Joseph Eugene Stiglitz, ForMemRS, FBA (born February 9, 1943) is an American economist and a professor at Columbia University. He is a recipient of the Nobel Memorial Prize in Economic Sciences (2001) and the John Bates Clark Medal (1979). He is a former senior vice president and chief economist of the World Bank, and is a former member, and Chairman of the Council of Economic Advisers.[2][3] He is known for his critical view of the management of globalization, free-market economists (whom he calls "free market fundamentalists"), and some international institutions like the International Monetary Fund and the World Bank.