NASA STEREO Camera Images. NASA has debunked theories about a not-so-mysterious smudge on one of its images. 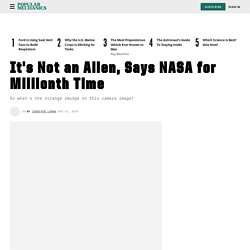 The smudge in question is just an artifact of light reflected back on the lens. UFO hunters can rest easy. For the millionth time, NASA has issued a statement assuring UFO buffs that what they've seen in an image is not, in fact, an alien. This Is What the Entire Known Universe Looks Like in a Single Image. Budassi was able to do this by collecting maps, photographs, and data from Princeton researchers and NASA. 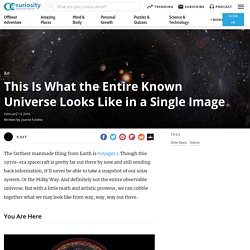 In 2005, a team of Princeton researchers published a collection of logarithmic maps of the Universe in Astrophysical Journal (you can see them here). While they look more like charts than they do rich photographs, the researchers were able to accurately "display the entire range of astronomical scales from the Earth's neighborhood to the cosmic microwave background" to a logarithmic scale. Using this information, Budassi put together "Photoshop using images from NASA and some textures created [on] my own. " NASA's Juno Took Beautiful Photo of Jupiter with Color Retouch. NASA/JPL-Caltech/SwRI/MSSS/Gerald Eichstädt/Seán Doran Advertisement - Continue Reading Below NASA's spacecraft Juno launched over six years ago with the mission to discover what the hell is going on underneath the clouds of the biggest planet in our solar system, Jupiter. 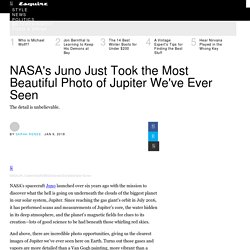 Since reaching the gas giant's orbit in July 2016, it has performed scans and measurements of Jupiter's core, the water hidden in its deep atmosphere, and the planet's magnetic fields for clues to its creation—lots of good science to be had beneath those whirling red skies. And above, there are incredible photo opportunities, giving us the clearest images of Jupiter we've ever seen here on Earth. Turns out those gases and vapors are more detailed than a Van Gogh painting, more vibrant than a sunset, at least when color-corrected by people on this planet.

Here's how it works: Juno takes black and white photos of Jupiter when it passes in its closest orbit, which NASA then uploads to a huge online gallery, JunoCam. From the sublime to the stunning: The best space photos of 2017. Best Astronomy Pictures: Insight Photographer of the Year. When you gaze up at the night sky, you're not just looking at celestial objects far away in space. 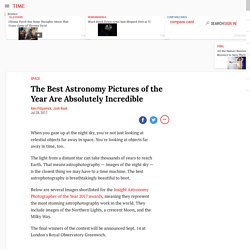 You're looking at objects far away in time, too. Cosmic speck: Earth as seen from Saturn. Astronomers May Have Just Taken the First Photo of a Black Hole. In new Cassini portraits, Saturn’s moon Pan looks like pasta. Saturn serves up the closest thing to space pasta, the latest round of images from NASA’s Cassini probe, released March 9, show. 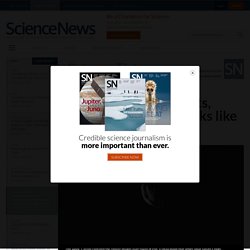 10 Most Impressive Photos of our Universe (universe pic) Eskimo Nebula The Eskimo Nebula (NGC 2392), also known as the Clownface Nebula, was discovered by astronomer William Herschel in 1787. 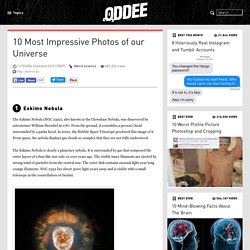 From the ground, it resembles a person's head surrounded by a parka hood. In 2000, the Hubble Space Telescope produced this image of it. From space, the nebula displays gas clouds so complex that they are not fully understood. The magical Solar System discoveries we made in 2015. It has been a busy year for Solar System exploration – and particularly our galactic neighbourhood’s small icy bodies. 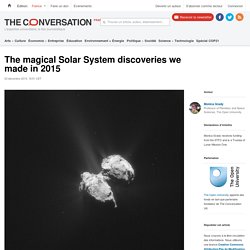 Comets, asteroids, Kuiper Belt Objects and planetary satellites have all been in the news – from stunning images of comet 67P Churyumov-Gerasimenko at the start of the year, to the recent close-up of Saturn’s moon, Enceladus, via Ceres and Pluto. University student maps plasma tubes in the sky. Using the Murchison Widefield Array (MWA) radio telescope in the Western Australia desert, a Sydney University student, Cleo Loi, has discovered enormous plasma pipes in the Earth’s upper atmosphere. 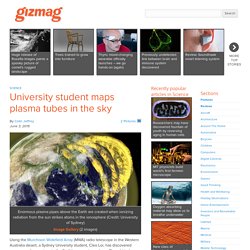 Thought to be responsible for possible radio interference with satellite navigation systems, the presence of these objects has been predicted for over 60 years, but never before seen. Huge release of Rosetta images paints a spooky picture of comet's rugged landscape. Around seven months after the European Space Agency's Rosetta probe made history by deploying its Philae lander onto the surface 67P/Churyumov-Gerasimenko, an expansive catalogue of images has been released providing an up-close look at the comet's rugged landscape. 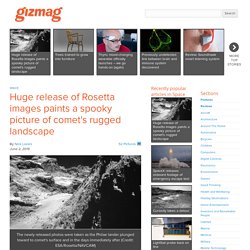 The photos were snapped by Rosetta's NavCam between September and November last year, as the spacecraft came as close as 8 km (5 mi) from the surface. The image library published online last week totals 1,776 photos. These were taken as the Philae lander plunged toward to comet's surface and in the days immediately after. This wouldn't be the Rosetta spacecraft's closest encounter with 67P/Churyumov-Gerasimenko, with a flyby in February bringing it as close as 6 km (3.7 mi) to the surface, where it grabbed images of the Imhotep region, revealing huge rocks and jagged landscapes broken up by flatter areas covered in dust.

Rosetta departed from Earth in 2004 and entered orbit around 67P/Churyumov-Gerasimenko last August. Earth-sized virtual telescope to study supermassive black hole at center of Milky Way. In astronomy, much like many other other aspects of life, bigger is better. 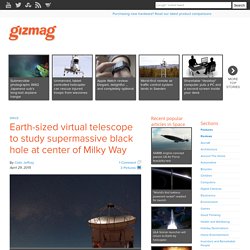 Hubble's deep field images of the early universe are postcards from billions of years ago. This insignificant patch of sky in the fairly obscure constellation of Fornax is the setting for one of the most remarkable images ever captured. Although only a fraction of the full moon in size, this image traces thousands of distant galaxies to the edge of the observable universe. The Hubble Space Telescope began observing “deep fields” in 1995. The idea was not new – astronomers have always tried to take longer photographic captures that draw in more light to reveal ever more faint and distant objects.

Observing more distant galaxies sheds light on how they form, and how their shapes and sizes change over time. Hubble’s key advantage is that, floating in orbit, it’s unaffected by the blurring effect of the atmosphere and so can provide images of far superior resolution than ground-based telescopes. Careful planning was required for the deep field images. Click to enlarge This was not without risk, however. Even dark skies are filled with stars. Mysterious Space Globule Looks Undeniably Beautiful. Some astronomers call it "God’s Hand. " NASA Releases Stunning Space Photos To Kick Off The 'International Year Of Light' 3-D Map Of Universe Shows Positions Of Known Galaxies In Unprecedented Detail.

NASA's Swift satellite reveals neighboring galaxies in unprecedented ultraviolet detail. Data from NASA's Swift satellite has been used to create the highest-ever resolution images of our two nearest galaxies, the Magellanic Clouds. The detailed ultraviolet light surveys measure 160 and 55 megapixels, and cumulatively show some 1.25 million ultraviolet sources. The two images show ultraviolet light ranging from 1,600 to 3,300 angstroms, a range of light that is largely blocked by the Earth's atmosphere. New photos of beautiful nebula. Nebulas consist of dust and gas, and that is also the case for NGC 6559 on the picture above, which was recently captured by the Danish telescope in Chile. Phytoplankton from space: Algae bloom seen from satellite. Black Hole Snacks on 'Super Jupiter' Planet. In a cosmic first, astronomers have discovered a black hole chowing down on what may be a giant rogue planet.

The supermassive black hole didn't finish off its meal, which scientists say was either a huge Jupiter-like planet wandering freely through space or a brown dwarf, a strange object that's larger than a planet yet still too small to trigger the internal fusion reactions required to become a full-fledged star. Amazing Pencil Nebula Glows on Deep-Space Canvas (Photo) ESO's best images of 2013 – so far. Near-True Color Image of Snowman. NASA releases GRAIL video.

The best NASA images from 2012. August 31, 2012: A solar filament erupts out into space (Image: NASA/GSFC/SDO) Image Gallery (19 images) Shock wave in space: A massive star plows through material between stars (photo). I was wondering what to post for today; a short philosophical piece, a longer discussion of holidays and family, a pretty picture, or something quick and funny.