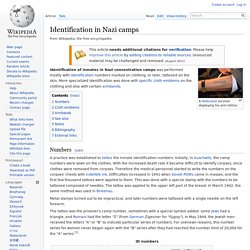 The tattoo was the prisoner's camp number, sometimes with a special symbol added: some Jews had a triangle, and Romani had the letter "Z" (from German Zigeuner for "Gypsy"). ID numbersAuschwitz survivor Sam Rosenzweig displays his identification tattoo.Holocaust survivor Rose Schindler shows the number tattoo on her arm to a U.S. Cloth emblems[edit] Armbands[edit] See also[edit] Notes[edit] Bibliography[edit] Holocaust: Concentration Camps & Auschwitz. The first concentration camps were set up in 1933. 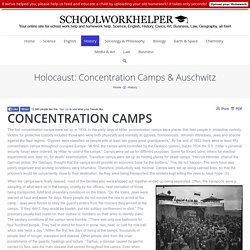 In the early days of Hitler, concentration camps were places that held people in protective custody. Victims for protective custody included those who were both physically and mentally ill, gypsies, homosexuals, Jehovah Witnesses, Jews and anyone against the Nazi regime. “Gypsies were classified as people with at least two gypsy great grandparents.” Neumann, Erich. Wannsee conference. The Wannsee Conference- Truth and Myth. | Print | E-mail Tuesday, 31 January 2012 10:36. 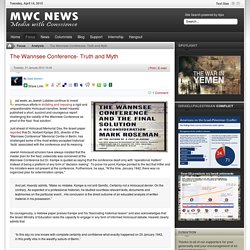 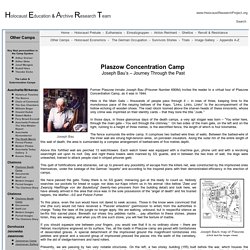 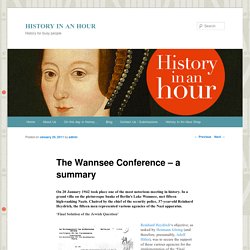 Goring’s letter to Heydrich, dated July 1941, pictured, states, ‘I hereby command you to make all necessary organizational, functional, and material preparations for a complete solution of the Jewish Question in the German sphere of influence in Europe.’ (Click image to enlarge). 7. Zyklon-B and Gas Chambers - Erin Moss Holocaust website. The Nazi leader, Heydrich, ordered all Jews killed regardless of age or gender using small-scale methods such as gassing vans, hangings and mass shootings. 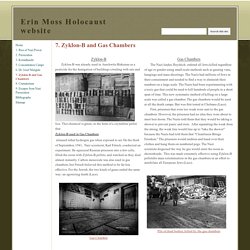 The Nazis had millions of Jews in their containment and needed to find a way to diminish their numbers on a large scale. The Nazis had been experimenting with a toxic gas that could be used to kill hundreds of people in a short span of time. This new systematic method of killing on a large scale was called a gas chamber. Wannsee Conference > Holocaust > Key Moments > WW2History.com.

On 20 January 1942 one of the most infamous meetings in history was held on the outskirts of Berlin at an elegant villa at 56–58 Am Grossen Wannsee. 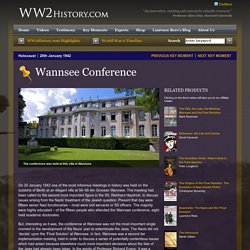 The meeting had been called by the second most important figure in the SS, Reinhard Heydrich, to discuss issues arising from the Nazis’ treatment of the Jewish question. Present that day were fifteen senior Nazi functionaries – most were civil servants or SS officers. Wannsee Conference. My Blog: Is History Worth studying? The Danish Center for Holocaust and Genocide Studies. In the period of 1941-1945, for the first time in the history of mankind, industrial plants were used to kill people. 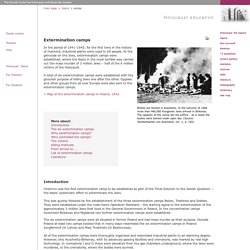 At the genocide on the Jews, extermination camps were established, where the Nazis in the most terrible way carried out the mass murder of 3 million Jews – half of the 6 million victims of the Holocaust. A total of six extermination camps were established with the ghoulish purpose of killing Jews one after the other. Gypsies and other groups from all over Europe were also sent to the extermination camps. Auschwitz death camp guard, 93, faces new trial as Germany makes desperate bid to jail 50 former S.S. men before they die peacefully of old age. Hans Lipschis, 93, is accused of working at Auschwitz from 1941 to 1945Says he was unaware of the wholesale slaughter, saying he was just a cookBut paperwork shows he was member of SS's feared Death’s Head BattalionComes after conviction of Sobibor death camp guard John Demjanjuk in 2011It set precedent making it enough to have just served at extermination site By Allan Hall for MailOnline Published: 13:21 GMT, 26 April 2013 | Updated: 14:54 GMT, 26 April 2013 German prosecutors have started proceedings against a former Auschwitz death camp guard in a last ditch bid to bring 50 former SS men to trial before they die peacefully of old age. 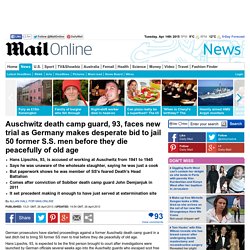 Hans Lipschis, 93, is expected to be the first person brought to court after investigations were launched by German officials several weeks ago into the Auschwitz guards who escaped scot free after WW2. Prosecutors in Stuttgart this week confirmed the criminal probe launched against him. Types of concentration camps - Key Stage 3 - The Holocaust Explained. Wannsee Conference. Wannsee Conference, meeting of Nazi officials on January 20, 1942, in the Berlin suburb of Wannsee to plan the “final solution” (Endlösung) to the so-called “Jewish question” (Judenfrage). 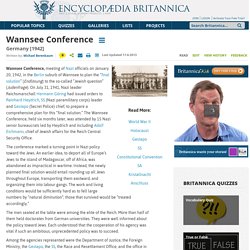