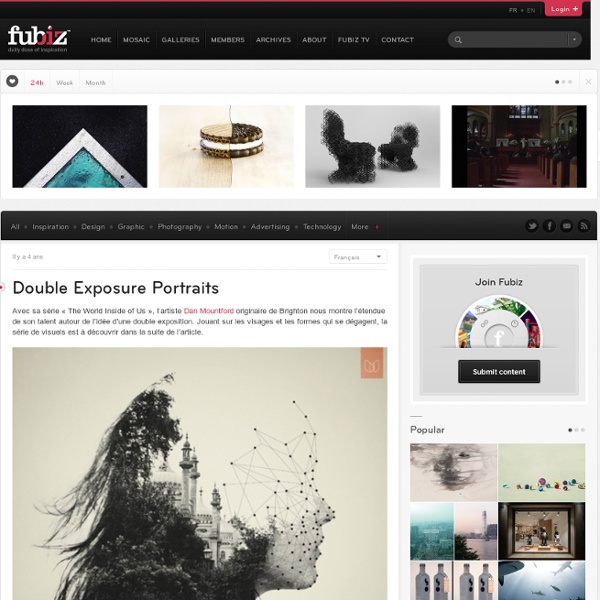 40 Beautiful and Very High-Resolution Wallpapers Do you have a boring desktop wallpaper? Are you tired of looking at the same, old desktop wallpaper? Well, here’s the remedy. This collection contains beautiful, high-quality and high-resolution (at least 1900x1200px) wallpapers. Oreo Cookies-Recipe Oreo-Oreo Recipes-Cheese Cupcakes-Oreo Cheesecakes Posted by Grace Massa Langlois on Wednesday, 21st July 2010 I have yet to meet a person who doesn’t like Oreo cookies or Cream Cheesecake Cupcakes. Who could resist cream-filled chocolate sandwich cookies? Not Me! Especially the double-stuffed Oreo cookie, it’s one of the best cookies for dunking into a cold glass of milk.

Beautifully Offbeat Photography (13 photos) Samuel Bradley's photos cannot be neatly categorized. Wonderfully offbeat and somewhat quirky, they truly span the spectrum. As he tells us, "I'm battling with two different ways of working and I don't know which one I prefer. I think most people follow my work and blog for the more quirky, interestingly processed and sometimes a bit 'cliché vintage' photographs. Mystical, Magical & Magnificent Monasteries in Meteora (20 Pics) The caves in Meteora, Greece, had inhabitants for fifty millennia, but due to raids, “hermit monks” moved to the safety of sandstone rock pinnacles in the 9th century and began building monasteries. More monks and nuns came, building more monasteries perched high upon the cliffs. Wikipedia reports, “Access to the monasteries was originally (and deliberately) difficult, requiring either long ladders lashed together or large nets used to haul up both goods and people. This required quite a leap of faith — the ropes were replaced, so the story goes, only ‘when the Lord let them break.’” UNESCO World Heritage says, “The net in which intrepid pilgrims were hoisted up vertically alongside the 1,224 ft. cliff where the Varlaam monastery dominates the valley symbolizes the fragility of a traditional way of life that is threatened with extinction.”

Great Photo Realistic Paintings That Reflect by Jason De Graaf Jason de Graaf (Artist)Photo Realistic Paintings Artist Statement My paintings are about staging an alternate reality, the illusion of verisimilitude on the painted surface, filtered so that it expresses my unique vision. Though my paintings may appear photoreal my goal is not to reproduce or document faithfully what I see one hundred percent, but also to create the illusion of depth and sense of presence not found in photographs. Many of my paintings are about the relationship of light with reflective and transparent surfaces and my journey to understand those qualities and convey my sense of wonder and intrigue over them.

Motivational Quotes From Maxitone Here at Maxitone, we love motivational quotes – they’re great for when you need a boost on your journey to your body goals and they’re great fun too! You can even see how much we love them over on our Pinterest profile . Because we know how much you ladies love them too, we’ve created some of our own that you can see below.

Photography's Longest Exposure - household name : : : blog [click +] Six months. That's right. The 40 Best Selected Wallpapers from National Geographic Magazine No doubt National Geographic features unbelievable photography. The authors and photographers for National Geographic are one of the mainly diverse and dedicated people, and this is very clear in every periodical they discharge. From city to country areas, from the cultured to the most foreign to the most deserted of locations, from happy proceedings to catastrophic ones, from home to the expert life, and spiritual and beyond, these people cover almost every bit of in sequence of every feature of this world. The photographic as well as journalistic excellence of National Geographic is truly undeniable. 40 photos

Inventive Commercial Photography Design Shop in Photography Inventive Commercial Photography Writen by Alexandru / 0 Comments Commercial photography is probably best defined as any photography for which the photographer is paid for images rather than works of art. In this light money could be paid for the subject of the photograph or the photograph itself. Photos, Photographers, and Picture Paraphernalia from All Corners of the Globe Jaimie Warren at The Hole: The Exclusive VICE Preview Here's an exclusive VICE preview of new work by Jaimie Warren from her second show at The Hole, which opens tonight. If You're Sick of Hearing About Ukraine, Try Living There In Donbas, Eastern Ukraine, you spend the day hacking away inside a pitch-black, kilometer-deep tar hole, breathing in exposed coal and methane. Why Are So Many Girls Wearing Cat Makeup on Tinder?

Before I Die What matters most to you Interactive public art project that invites people to share their personal aspirations in public. After losing someone she loved and falling into depression, Chang created this experiment on an abandoned house in her neighborhood to create an anonymous place to help restore perspective and share intimately with her neighbors.