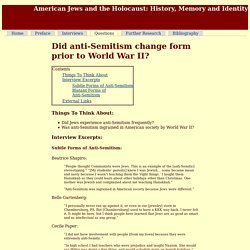 Was anti-Semitism ingrained in American society by World War II? Interview Excerpts: Jumonville Photo Blog. Anti-Semitism in European Middle Ages 800-1400 (Encyclopaedia Judaica) The Palestinian refugees of 1936 were...Jews. Thousands of Jews were forced to flee their homes: All these photos were done by Zoltan Kluger. 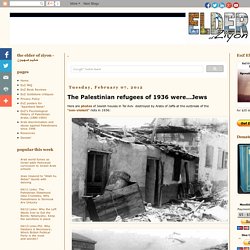 I found them at this Israeli photo archive website that just became public - although the website was created in 1998, and it shows. ICEJ International. The Holocaust was the murder by Nazi Germany of six million Jews. 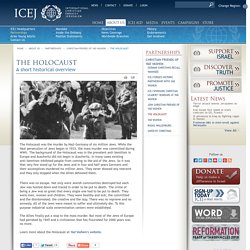 While the Nazi persecution of Jews began in 1933, the mass murder was committed during WWII. The background of the Holocaust was in the prevalent anti-Semitism in Europe and Auschwitz did not begin in Auschwitz. History of Eastern European Jews. Based on several sources; see references Jewish massive settlement in Middle and Eastern Europe has been recorded since the end of the 11th century. 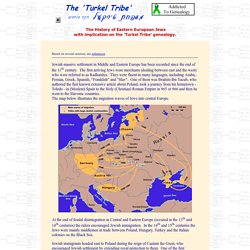 The first arriving Jews were merchants (dealing between east and the west) who were referred to as Radhanites. They were fluent in many languages, including Arabic, Persian, Greek, Spanish, "Franklish" and "Slav". One of them was Ibrahim Ibn Yacub, who authored the first known extensive article about Poland, took a journey from his hometown - Toledo - in (Moslem) Spain to the Holy (Christian) Roman Empire in 965 or 966 and then he went to the Slavonic countries. Jewish Population of Europe Before the Holocaust Map. Jewish Communities in Germany, Austria, and Czechoslovakia - Map. (c. 1933) Eighty percent of the Jews in Germany (about 400,000 people) held German citizenship. 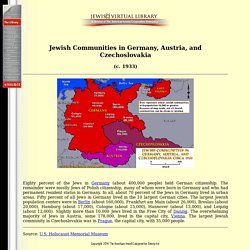 The remainder were mostly Jews of Polish citizenship, many of whom were born in Germany and who had permanent resident status in Germany. In all, about 70 percent of the Jews in Germany lived in urban areas. Fifty percent of all Jews in Germany lived in the 10 largest German cities. The largest Jewish population centers were in Berlin (about 160,000), Frankfurt am Main (about 26,000), Breslau (about 20,000), Hamburg (about 17,000), Cologne (about 15,000), Hannover (about 13,000), and Leipzig (about 12,000). Source: U.S. Hitler Named Chancellor of Germany. When Adolf Hitler walked into the presidential office of Paul von Hindenburg to become chancellor, the old gentleman was so annoyed he would hardly look at him. 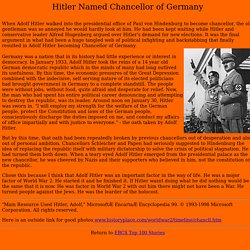 He had been kept waiting while Hitler and conservative leader Alfred Hugenberg argued over Hitler's demand for new elections. It was the final argument in what had been a huge tangled web of political infighting and backstabbing that finally resulted in Adolf Hitler becoming Chancellor of Germany. Germany was a nation that in its history had little experience or interest in democracy. +++ German ++ Propaganda +++ In the early days of the Nazi Party, Hitler made sure that he himself was Director of Propaganda. 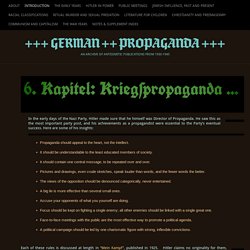 He saw this as the most important party post, and his achievements as a propagandist were essential to the Party’s eventual success. Here are some of his insights: + Propaganda should appeal to the heart, not the intellect. + It should be understandable to the least educated members of society. + It should contain one central message, to be repeated over and over. + Pictures and drawings, even crude sketches, speak louder than words, and the fewer words the better. + The views of the opposition should be denounced categorically, never entertained. + A big lie is more effective than several small ones. + Accuse your opponents of what you yourself are doing. + Focus should be kept on fighting a single enemy; all other enemies should be linked with a single great one.

Why does US government let Israel discriminate against Americans? The commemoration of the fiftieth anniversary of the march on Washington is a historic milestone and heartening symbol of the progress that has been made since then, but it is also a reminder that Martin Luther King’s dream is still far from reality. 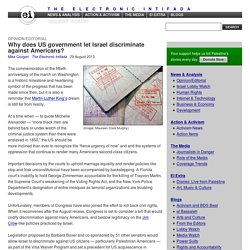 At a time when — to quote Michelle Alexander — “more black men are behind bars or under watch of the criminal justice system than there were enslaved in 1850,” the US should be more inclined than ever to recognize the “fierce urgency of now” and end the systems of oppression that continue to render many Americans second-class citizens. Important decisions by the courts to uphold marriage equality and render policies like stop and frisk unconstitutional have been accompanied by backstepping. 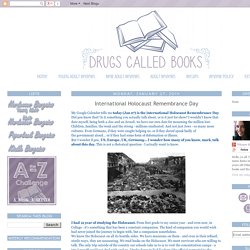 Did you know that? Is it something you actually talk about, or is it just for show? I wouldn't know that date myself, being both a Jew and an Israeli, we have our own date for mourning the million lost. Children, families, the weak and the strong - millions eradicated. And not just Jews - so many more cultures. I had 12 year of studying the Holocaust. So I couldn't ignore today, the International Holocaust Remembrance Day and put up a review like always.