Infochammel. The Hobbit: A Long-Expected Autopsy (Part 1/2) Funniest thing i ever heard scooby-doo say. Ask Again Later - a short film by Jessica Smith. Icing Artist Beware (1959) "Huh"? by Mike Judge. Stripes in Movies: Why Do Characters Wear Them? Chinese Invisibility Cloak Hoax DESTROYED!!! Show Box app! Free Movies and TV-shows on your Android device. ROLFE: A No-Budget Dream (2002. I MUST MAKE THIS FILM.com. The Time Zack Morris Told His Girlfriend's Little Sister To Hook Up With Him Twice. 7 Movie Plot Holes Big Enough to Walk Through - Answers.com. Does The Dog Die? #TubeClash - The Movie There are "wookies" in the movie that look little like the ones in Star Wars, but are more like cute little fuzzballs. 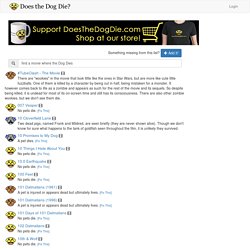 One of them is killed by a character by being cut in half, being mistaken for a monster. It however comes back to life as a zombie and appears as such for the rest of the movie and its sequels. So despite being killed, it is undead for most of its on-screen time and still has its consciousness. There are also other zombie wookies, but we don't see them die. 10 Cloverfield Lane Two dead pigs, named Frank and Mildred, are seen briefly (they are never shown alive). 13 Cameras A newlywed couple have no idea their grim, lascivious landlord has been spying on them since they moved in. 2 Guns Chickens are buried up to their necks in the ground and their heads are shot off. 2012 The dog (a Japanese Chin) does not die. 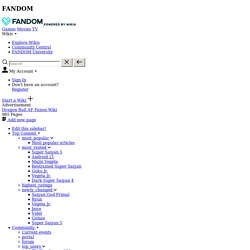 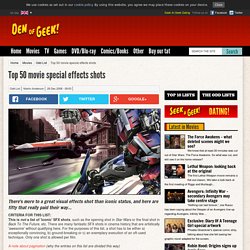 There are many fantastic SFX shots in cinema history that are artistically 'awesome' without qualifying here. For the purposes of this list, a shot has to be either a) exceptionally convincing, b) ground-breaking or c) an exemplary execution of an oft-used technique. Only one shot is allowed per film. A note about pagination (why the entries on this list are divided this way) 50: Alien: Resurrection (1997) - Ripley clone matures Jean-Pierre Jeunet's quirky fourth entry to the Alien series boasts many eccentric touches worthy of mention, including an elegant solution for the astronaut who even has to carry his whiskey freeze-dried, as well as the first CGI examples of H.R. Great practical effects films. I'll always applaud the old school effects, if only for the immense work in just getting one ship to light up. 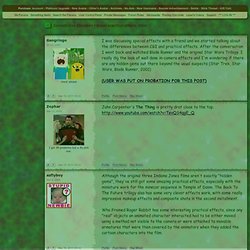 Take this shot. It looks pretty straight forwards, ship in front of background moving around. But due to the nature of film is where things get tricky. If you were to just light the ship then shoot it would appear flat with and washed out as every element has different exposure rates. To capture this correctly you have to film multiple passes for each different layer of lighting intensity; one for the windows, the running light, the dish and then the ambient and key lighting. But unlike the world of digital it's no simple matter combining this, these were often done in layers, often by overprinting on the same bit of film.

The intense lighting used for things like buildings often led to things being combustible on set, such as Blade Runner where the Tyrell building was being re-purposed for something else melted. Yes that is a car being shoved through the set. Jackie Chan - My Stunts 01. The Art of Practical Effects. As noted by my other entries, I am biased towards natural cinematography shot on motion picture film. 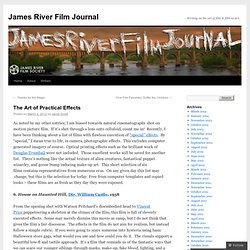 If it’s shot through a lens onto celluloid, count me in! Recently, I have been thinking about a list of films with flawless execution of “special” effects. By “special,” I mean true to life, in camera, photographic effects. This excludes computer generated imagery of course. Optical printing effects such as the brilliant work of Douglas Trumball were not included. 6.

From the opening shot with Watson Pritchard’s disembodied head to Vincent Price puppeteering a skeleton at the climax of the film, this film is full of cleverly executed effects. 5. Victor Sjöström‘s Swedish Silent masterpiece showcases some of the earliest and most refined use of multiple exposure effects. 4. One of the best horror films ever made. 50 Amazing Movie Facts! 2. 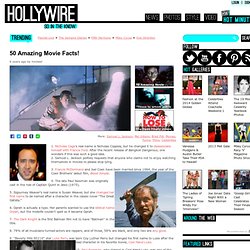 Samuel L. Jackson politely requests that anyone who claims not to enjoy watching themselves in movies to please stop lying. 3. Francis McDormand and Joel Coen have been married since 1984, the year of the Coen Brothers' debut film, Blood Simple. 4. 5. Public Domain Horror VHS Art. Farewell, FamiKamen Rider. S Celebrity Invasion.