What are Wikis? Common Craft 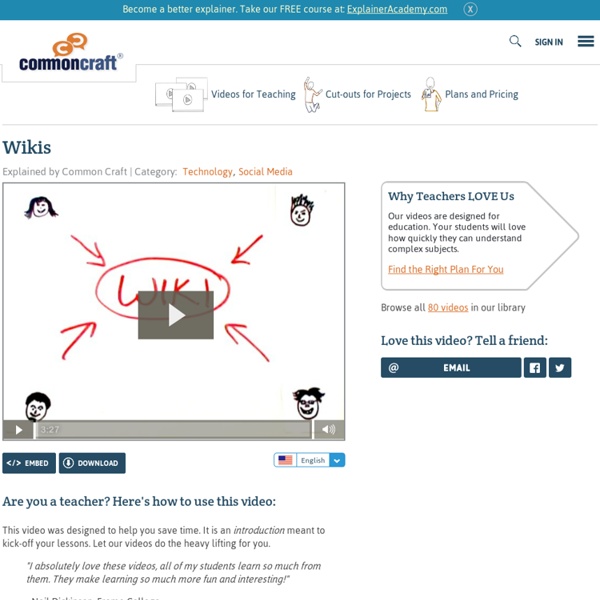 These four friends are going on a camping trip. They need to bring the right supplies because they're backpacking. The group needs to plan and plan well, so coordination is key. They're all computer users, so they start planning with an email. It's start with one, but then becomes a barrage. Email is not good at coordinating and organizing a group's input. The important information is scattered across everyone's inbox. There is a better way. Most wikis work the same. The buttons are really important. Here are our camping friends and here is a wiki website. Once you're finished editing, you click save and the document becomes a webpage once again, and is ready for the next person to edit it - easy! Edit - Write - and Save. Mary signs up for a wiki site and then sees the new site for the first time. Now it's John's turn. Henry visits the wiki, clicks edit and he can edit the page. Frank saves the page and realizes something awesome. But wait!

What is Social Bookmarking? Common Craft It's just too much. Did you know that there are over 15 billion web pages? To make sense of it all, we need to pluck out the best pages and save them for later. We have choices. We could bookmark or add to favorites in our web browser. sridgway » IntroductionToPodcasting Session Outcomes This workshop introduces participants to podcasting & vodcasting and looks at the tools and techniques used in their production and delivery within an educational context. At the end of the session participants will be able to:Understand the principles behind podcasts & vblogsTo subscribe to them using an aggregator ie iTunes, JuiceFind podcasts of interest on the internetUnderstand how podcasts & vodcasts are producedRecord audio using Audacity/Audition or an mp3 recorder/Apple ipodEdit the audio using Audacity/Audition and export to mp3Post a podcast to a wordpress blog using the podpress pluginShare ideas for using podcasts and audio material in education What is Podcasting & Vblogging image by mobology Podcasting is a method of delivering regularly updated audio content (typically in the mp3 format).

Seven Strategies for Marketing in a Web 2.0 World Cover Story Seven Strategies for Marketing in a Web 2.0 World By Darlene Fichter When you start to talk about marketing library products and services, the four P’s of marketing come to mind: product, pricing, promotion, and placement. Traditional marketing plans identified the product or service features that would satisfy the wants and needs of consumers, as well as the right price, the method of promotion, and the merchandizing or distribution. What are Blogs? Common Craft You've seen the word, you've seen the web sites and you may even have one. But have you ever wondered: What's the big deal about blogs? To make sense of blogs, you have to think about the news and who makes it. We'll look at news in the 20th vs. the 21st century to make our point. In the 20th century, the news was produced professionally. When news happened, reporters wrote the stories and a tiny group of people decided what appeared in a newspaper or broadcast.

What is a Wiki - Wikis Explained - Understanding Wiki Ward Cunningham, the man behind the very first wiki, described it as "the simplest online database that could possibly work." But, while this sounds good rolling off the tongue, it is not very descriptive, and to be honest, not entirely accurate. A better description would be a wiki is the simplest collaborative content management system that could possibly work. Sounds complicated, huh? That might be why Ward Cunningham chose not to describe it that way, but it really is a more accurate description because it pinpoints that special something that have caused wikis to burn through the web like a wildfire. A Wiki is a Content Management System Institute: Get Smart About Your Readers Your comment reminds me of Phil Meyer's recollections in his book "The Vanishing Newspaper." He recalls a conversation with a Knight Ridder executive, Hal Jurgensmeyer, who says newspapers aren’t in the news business, or even in the information business. Newspapers, Jurgensmeyer said, are in the influence business. He goes on to quote Jurgensmeyer:“A newspaper produces two kinds of influence: societal influence, which is not for sale, and commercial influence, or influence on the consumer’s decision to buy, which is for sale. The beauty of this model is that it provides economic justification for excellence in journalism.” “This is true because a news medium’s societal influence enhances its commercial influence.

What is Social Media? Common Craft I’m sure you’ve heard the buzz. Social Media may be the next big thing. What’s it all about? Let’s take a visit to Scoopville, a town that’s famous for ice cream. For over 20 years, Big Ice Cream Company has been making high quality ice cream with a big factory in town. A few years back, the company did focus groups and found out that they could maximize profits by offering three flavors: Chocolate, Vanilla and Strawberry. A Tale of Two Wikis: Techniques for building, managing and promoting collaborative communities This page is part of the Proceedings of Wikimania 2006. Abstract Introduction For those of you who just dropped in – despite the track title, this presentation is not about Wikipedia, nor is it about a Wikimedia project. It is intended for people who have decided that there should be a place outside Wikimedia for their community, and who are preparing (or have begun) to build one. You may also be a member of such a community who wishes to take on a bigger role in guiding its future development.

What Is Web 2.0 by Tim O'Reilly 09/30/2005 Oct. 2009: Tim O'Reilly and John Battelle answer the question of "What's next for Web 2.0?" in Web Squared: Web 2.0 Five Years On. The bursting of the dot-com bubble in the fall of 2001 marked a turning point for the web. What is Social Networking? Common Craft Networks get things done. Whether it's sending a letter or lighting your home. Networks make it happen. To get from Chicago to Santa Fe, we need to see the network of roads that will get us there. We see that Chicago is connected to St Louis, which is connected to Dallas, which is connected to Santa Fe. Of course, people networks can help us with finding jobs, meeting new friends, and finding partners.