Internet Argument Techniques. The 7 Most Unintentionally Creepy Places on the Internet. The Internet is enormous. 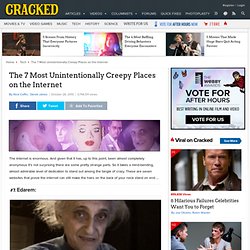 And given that it has, up to this point, been almost completely anonymous it's not surprising there are some pretty strange parts. So it takes a mind-bending, almost admirable level of dedication to stand out among the tangle of crazy. 5 Internet Annoyances That Are Way Older Than the Internet. Technology advances in a blur -- a lot of us can't remember what life was like before smartphones, let alone the Internet. 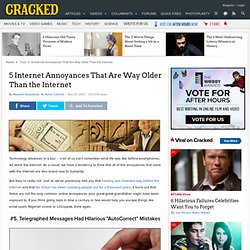 As a result, we have a tendency to think that all of the annoyances that came with the Internet are also brand new to humanity. But they're really not. Just as we've previously told you that hacking was invented way before the Internet and that fan fiction has been creeping people out for a thousand years, it turns out that those are not the only common online annoyances your great-great-grandfather might have been exposed to. If you think going back in time a century or two would help you escape things like email spam, Nigerian scams or LOLspeak, think again. #5.

Photos.com Have you ever sent a text message only to later find out your phone's software AutoCorrected the shit out of it, making it unreadable or, even worse, completely changing the meaning? The typical internet conversation. Hashtags’ mission creep. « previous post | next post » Sam B. writes: I've noticed that the hashtag has bled out beyond its origin as a way of grouping similar messages on Twitter by topic (ie #TahrirSquare, #fukushima, #election, etc) 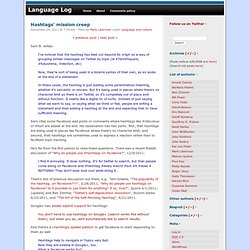 Comments. Telegraphic language. « previous post | next post » Following up on various recent discussions of how Twitter and other new communications media may be affecting the English language, I'd like to draw your attention to a well-reasoned consideration of this issue from an earier era: Robert Lincoln O'Brien, "Machinery and English Style", The Atlantic Monthly 1904: In every age since written language began, rhetorical forms have been to a considerable extent influenced by the writing materials and implements which were available for man's use. 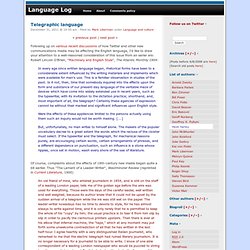 This is a familiar observation in studies of the past. Is it not, then, time that somebody inquired into the effects upon the form and substance of our present-day language of the veritable maze of devices which have come into widely extended use in recent years, such as the typewriter, with its invitation to the dictation practice; shorthand, and, most important of all, the telegraph? But, unfortunately, no man writes to himself alone. 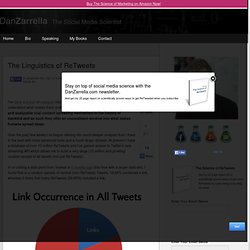 ReTweets are the first entirely observable and analyzable viral content spreading mechanism in the history of mankind and as such they offer an unparalleled window into what makes humans spread ideas. Over the past few weeks I’ve begun delving into much deeper analysis than I have in the past with more advanced tools and a much larger dataset. At present I have a database of over 10 million ReTweets and I’ve gained access to Twitter’s new streaming API which allows me to build a very large (10 million and growing) random sample of all tweets (not just ReTweets). Electronic Classroom: September 1997 Exploring Literacy Column from RT.

Caity's Question: Literacy as Deixis on the Internet Donald J. 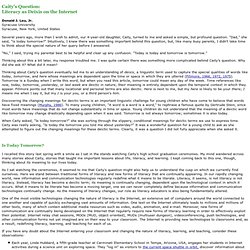 Leu, Jr. Syracuse University Syracuse, New York, United States. Wikipedia Wars. There is an item in PLoS ONE on one of my favorite topics: Wikipedea. 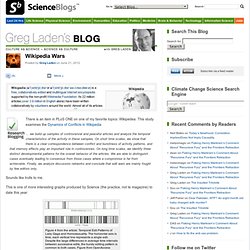 This study examines the Dynamics of Conflicts in Wikipedia … we build up samples of controversial and peaceful articles and analyze the temporal characteristics of the activity in these samples. On short time scales, we show that there is a clear correspondence between conflict and burstiness of activity patterns, and that memory effects play an important role in controversies. On long time scales, we identify three distinct developmental patterns for the overall behavior of the articles. We are able to distinguish cases eventually leading to consensus from those cases where a compromise is far from achievable. [Citation Needed] Imagine a world in which every single person is given free access to bad jokes and other deleted nonsense. - BJAODN. From BJAODN Parodies the unofficial motto on Meta's home page. 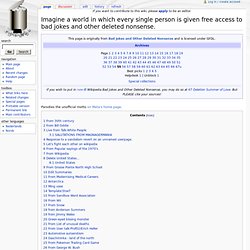 [edit] From 30th century In the year 3000 the Simpsons becomes a reality and takes over the world [edit] From Bill Oddie [edit] Live from Talk:White People. JSBlog - Journal of a Southern Bookreader: Crab collars. Deleted articles with freaky titles. Long-term abuse. How the Professor Who Fooled Wikipedia Got Caught by Reddit - Yoni Appelbaum. Interactional Coherence in CMC. Webbervpaper. Pop vs. Soda Stats. 4chan and /b/: An Analysis of Anonymity and Ephemerality in a Large Online Community.

Teddy Wayne: Sharing on the Internet. The popular social blogging site Tumblr is hiring writers and editors to cover the world of Tumblr. 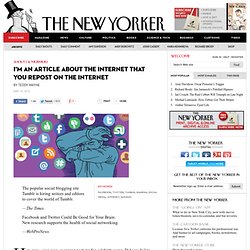 —The Times.Facebook and Twitter Could Be Good for Your Brain: New research supports the health of social networking. A gif is worth a thousand emoticons. Syntactician: On Tumblr, which is a blogging site which is mostly devoted to teenagers endlessly reblogging each other’s inane cute/humorous images, telling the world about their love of Matt Smith/Benedict Cumberbatch and delivering expletive-laden diatribes on other people’s inability to use the words you’re and your correctly, people like to express their feelings on a subject by adding a gif (a simple moving image on a short loop) to their post.

…These gifs are commonly snippets of films or TV programmes, with a close up of an actor or celebrity making some kind of easily-interpreted facial expression or action (sometimes with speech which is usually also provided in writing). 50 Funny Amazon Reviews. UHpinions – Funny Reviews from Amazon, Yelp, etc.! – Real. Ridiculous. Reviews. David Crystal - Internet Language. Internet linguistics. Internet linguistics is a sub-domain of linguistics advocated by David Crystal. It studies new language styles and forms that have arisen under the influence of the Internet and other New Media, such as Short Message Service (SMS) text messaging.[1][2] Since the beginning of Human-computer interaction (HCI) leading to computer-mediated communication (CMC) and Internet-mediated communication (IMC), experts have acknowledged that linguistics has a contributing role in it, in terms of web interface and usability. Studying the emerging language on the Internet can help improve conceptual organization, translation and web usability.