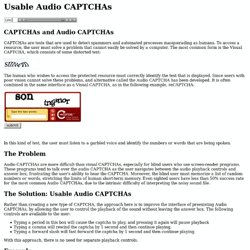 To access a resource, the user must solve a problem that cannot easily be solved by a computer. The most common form is the Visual CAPTCHA, which consists of some distorted text: The human who wishes to access the protected resource must correctly identify the text that is displayed. Since users with poor vision cannot solve these problems, and alternative called the Audio CAPTCHA has been developed. In this kind of test, the user must listen to a garbled voice and identify the numbers or words that are being spoken. The Problem Audio CAPTCHAs are more difficult than visual CAPTCHAs, especially for blind users who use screen-reader programs. The Solution: Usable Audio CAPTCHAs Typing a period in this box will cause the captcha to play, and pressing it again will pause playback Typing a comma will rewind the captcha by 1 second and then continue playing. Example. 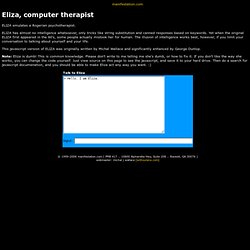 ELIZA has almost no intelligence whatsoever, only tricks like string substitution and canned responses based on keywords. Yet when the original ELIZA first appeared in the 60's, some people actually mistook her for human. The illusion of intelligence works best, however, if you limit your conversation to talking about yourself and your life. RFC 439 - PARRY encounters the DOCTOR (RFC439)

'I'll take human ingenuity for $2,000' A mere three years ago, the IBM computer now known as Watson was a "Jeopardy! 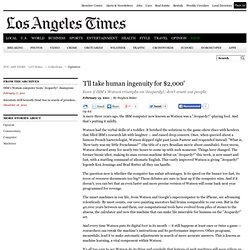 "-playing fool. And that's putting it mildly. Watson had the verbal skills of a toddler. It botched the solutions to the game-show clues with howlers that filled IBM's research lab with laughter — and raised deep concern. Once, when queried about a famous French bacteriologist, Watson skipped right past Louis Pasteur and responded instead: "What is, 'How tasty was my little Frenchman? '" The question now is whether the computer has unfair advantages. The smart machines in our life, from Watson and Google's supercomputer to the iPhone, are advancing relentlessly. And every time Watson puts its digital foot in its mouth — it still happens at least once or twice a game — researchers can tweak the machine's instructions and its performance improves. NETtalk (artificial neural network) NETtalk is an artificial neural network. 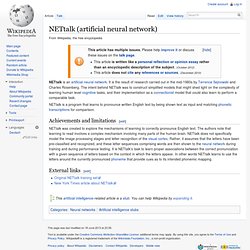 It is the result of research carried out in the mid-1980s by Terrence Sejnowski and Charles Rosenberg. The intent behind NETtalk was to construct simplified models that might shed light on the complexity of learning human level cognitive tasks, and their implementation as a connectionist model that could also learn to perform a comparable task.

NETtalk is a program that learns to pronounce written English text by being shown text as input and matching phonetic transcriptions for comparison. NETtalk was created to explore the mechanisms of learning to correctly pronounce English text. The authors note that learning to read involves a complex mechanism involving many parts of the human brain. AI Takes Baby Steps: RoboBaby Learns Words. In 1998, a strange fad swept the nation. 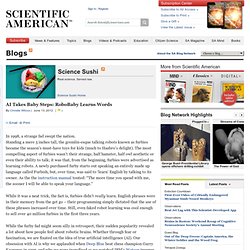 Standing a mere 5 inches tall, the gremlin-esque talking robots known as furbies became the season’s must-have toys for kids (much to Hasbro’s delight). The most compelling aspect of furbies wasn’t their strange, half hamster, half owl aesthetic or even their ability to talk; it was that, from the beginning, furbies were advertised as learning robots. A newly purchased furby starts out speaking an entirely made up language called Furbish, but, over time, was said to ‘learn’ English by talking to its owner. The case of the missing spamularity. 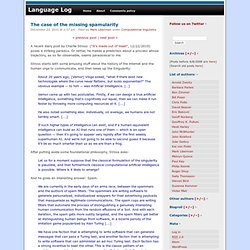 Or rather, he makes a prediction about a process whose trajectory, as so far observable, seems paradoxical to me. Listeners needed for TTS standards intelligibility test. « previous post | next post » Email from Ann Syrdal on behalf of the S3-WG91 Standards Working Group : The "Text-to-Speech Synthesis Technology" ASA Standards working group (S3-WG91) is conducting a web-based test that applies the method it will be proposing as an ANSI standard for evaluating TTS intelligibility. 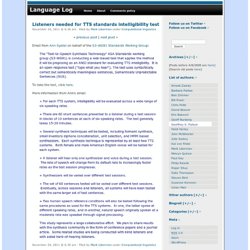 It is an open-response test ("type what you hear"). The test uses syntactically correct but semantically meaningless sentences, Semantically Unpredictable Sentences (SUS). To take the test, click here . Cnoinented metalanguage. « previous post | next post » Another example of e-publishing string-replacement gone wrong, from the Kindle edition of Ed McBain's Blood Relatives, originally published in 1975: The problem here, of course, is that someone turned "hang" into "noindent" in the middle of the words change and changed. 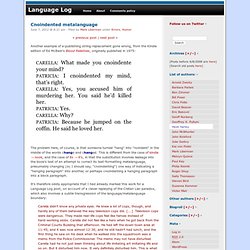 This is different from the case of kindle → nook, and the case of its → it's, in that the substitution involves leakage into the book's text of an attempt to correct its text-formatting metalanguage, presumably changing (or, I should say, "cnoindenting") one way of indicating a "hanging paragraph" into another, or perhaps cnoindenting a hanging paragraph into a block paragraph.