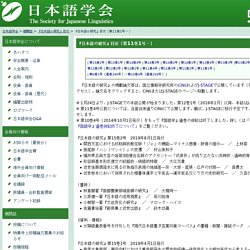 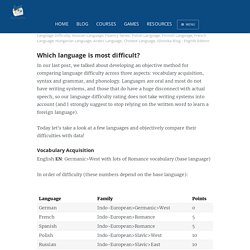 In our last post, we talked about developing an objective method for comparing language difficulty across three aspects: vocabulary acquisition, syntax and grammar, and phonology. Languages are oral and most do not have writing systems, and those that do have a huge disconnect with actual speech, so our language difficulty rating does not take writing systems into account (and I strongly suggest to stop relying on the written word to learn a foreign language). Today let's take a look at a few languages and objectively compare their difficulties with data! Vocabulary Acquisition. Norwegian Graduate Researcher School in Linguistics and Philology - NTNU. The main aim of the graduate training school in linguistics and philology is to provide young researchers with a broad training in theories and research methods in linguistics and philology by offering a high quality, structured course programme that complements and deepens the training courses offered locally by each of the individual participating institutions. 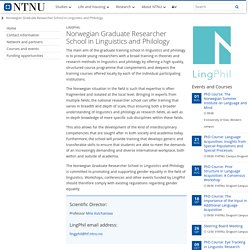 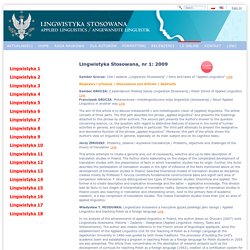 The article consists of three parts. The first part describes the phrase „applied linguistics" and presents the meanings attached to this phrase by other authors. Jerzy ŻMUDZKI: Problemy, zadania i wyzwania translatoryki / Problems, objectives and challenges of the theory of translation Link. Studies in Polish Linguistics. Make a Donation – The Endangered Alphabets Project. Islands of language enter virtual reality. There are almost 7,000 human languages spoken around the world, but by the end of the century almost half could be extinct, existing only as preserved specimens in obscure databases. 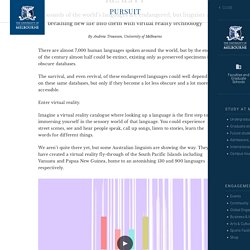 The survival, and even revival, of these endangered languages could well depend on these same databases, but only if they become a lot less obscure and a lot more accessible. Enter virtual reality. Imagine a virtual reality catalogue where looking up a language is the first step to immersing yourself in the sensory world of that language. You could experience street scenes, see and hear people speak, call up songs, listen to stories, learn the words for different things. We aren’t quite there yet, but some Australian linguists are showing the way. As you fly over Vanuatu’s 80 islands, courtesy of a virtual reality headset, shards of light beam up from each language locality, guiding you where to go. Zoltán Dörnyei’s Personal Website. Learn These Words First. Asian Language and Linguistics - Cambridge University Press. Studies in Polish Linguistics. About - Centre for Research in Linguistics and Language Sciences. 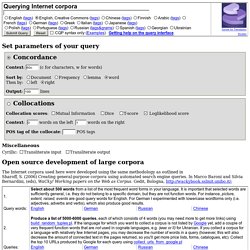 In Marco Baroni and Silvia Bernardini, (eds), WaCky! Working papers on the Web as Corpus. Gedit, Bologna, Steps 2 and 3 above use customised versions of tools from Marco Baroni's BootCat, which also has a very extensive description of installation requirements and tool functions. Have a look at them. The English CC corpus has been compiled from webpages with the Creative Commons permissive licences. The Perl scripts are free software. The interface and corpora were developed by Serge Sharoff; contact me at s.sharoff leeds.ac.uk, if you have further queries. Mówić po polsku - Learn Polish online. The New Transparent Language Online is Here. Posted on 11. 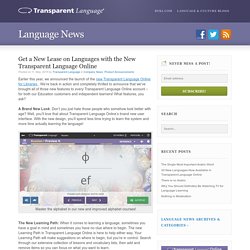 May, 2015 by Transparent Language in Company News, Product Announcements Earlier this year, we announced the launch of the new Transparent Language Online for Libraries . Insights into Theories of Language Acquisition. Several schools of thought exist explaining the phenomenon, and each has implications for language learners. 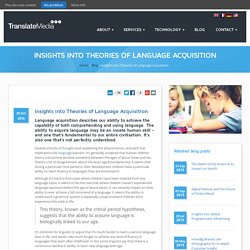 It’s generally accepted that human children have a critical time window sometime between the ages of about three and ten. There’s a lot of disagreement about the exact age boundaries but it seems that during a particular time period in their development children have a particular ability to reach fluency in languages they are immersed in. Although it’s hard to find cases where children have been isolated from any language input, it seems to be the case that where children haven’t experienced language exposure before the age of about seven, it can severely impact on their ability to ever achieve a full command of a language. It seems the ability to understand a grammar system is especially compromised if children don’t experience this early in life. This theory, known as the critical period hypothesis, suggests that the ability to acquire language is biologically linked to our age.

Intercultural understanding. Language B. Numbers in Over 5000 Languages. Compiled by the irrepressible Mark Rosenfelder. 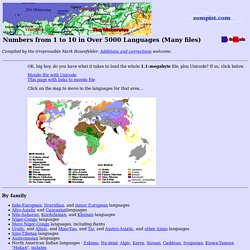 Additions and corrections welcome. By family Special collections Proto-languages only: perfect for the long-range comparison fan Million-speaker languages: the world's major languages The numbers in various writing systems, plus field notes on distinguishing various types of writing systemsRick Schellen's page of the numbers in over 400 Indo-European dialects.Jennifer Runner's page on common expressions in many languages.