View topic - Bizarre Sound Changes. Metaplasm. A metaplasm[1] is a change in the orthography (and hence phonology) of a word. 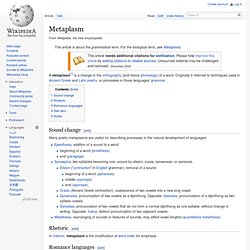 Originally it referred to techniques used in Ancient Greek and Latin poetry, or processes in those languages' grammar. Sound change[edit] Grammaticalization. In linguistics, grammaticalization (also known as grammatization, grammaticization) is a process by which words representing objects and actions (i.e. nouns and verbs) transform through sound change and language migration to become grammatical markers (affixes, prepositions, etc.). 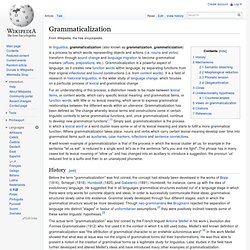 Grammaticalization is a powerful aspect of language, as it creates new function words within language, by separating functions from their original inflectional and bound constructions (i.e. from content words). Category:Proposed language families. Nostratic languages. A phylogenetic representation of Nostratic as proposed by Bomhard (2008). 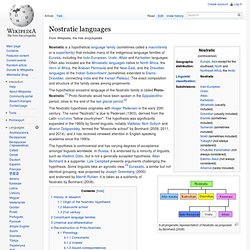 The hypothetical ancestral language of the Nostratic family is called Proto-Nostratic.[1] Proto-Nostratic would have been spoken in the Epipaleolithic period, close to the end of the last glacial period.[2] The hypothesis is controversial and has varying degrees of acceptance amongst linguists worldwide. In Russia, it is endorsed by a minority of linguists, such as Vladimir Dybo, but is not a generally accepted hypothesis. Allan Bomhard is a supporter. Lyle Campbell presents arguments challenging the hypothesis. 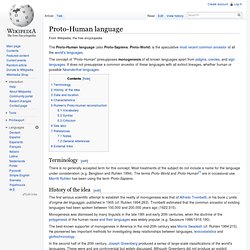 The concept of "Proto-Human" presupposes monogenesis of all known languages apart from pidgins, creoles, and sign languages. It does not presuppose a common ancestor of these languages with all extinct lineages, whether human or possible Neanderthal languages. Terminology[edit] There is no generally accepted term for this concept. Most treatments of the subject do not include a name for the language under consideration (e.g. History of the idea[edit] Was Proto-Human an SOV language? Most scholars agree that all of today’s languages descend from a common ancestral language, Proto-Human, which was spoken by behaviourally modern humans (BMHs) some time between 200,000 and 50,000 years ago. 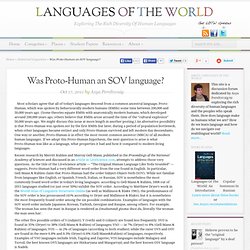 (Some theories equate BMHs with anatomically modern humans, which developed around 200,000 years ago; others believe that BMHs arose around the time of the “cultural explosion” 50,000 years ago. Pseudoscientific language comparison. Pseudoscientific language comparison is a form of pseudo-scholarship that has the objective of establishing historical associations between languages by naive postulations of similarities between them. 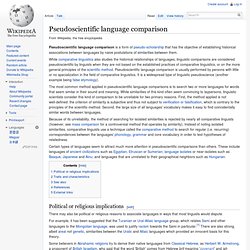 While comparative linguistics also studies the historical relationships of languages, linguistic comparisons are considered pseudoscientific by linguists when they are not based on the established practices of comparative linguistics, or on the more general principles of the scientific method. Mass comparison. In spite of widespread skepticism about his method, some of the relationships established by Greenberg gradually came to be generally accepted (e.g. 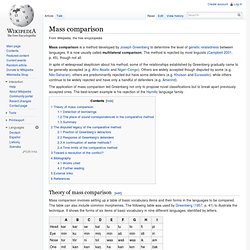 Afro-Asiatic and Niger–Congo). Others are widely accepted though disputed by some (e.g. Nilo-Saharan), others are predominantly rejected but have some defenders (e.g. Khoisan and Eurasiatic), while others continue to be widely rejected and have only a handful of defenders (e.g. Amerind). The application of mass comparison led Greenberg not only to propose novel classifications but to break apart previously accepted ones. The evolution of word order and “free word order” languages. In the previous posting, I outlined the recently proposed theory by Gell-Mann and Ruhlen on the origin and evolution of word order. 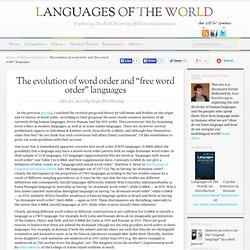 According to their proposal, the most recent common ancestor of all currently living human languages, Proto-Human, had the SOV order. Jespersen's Cycle. Introduction[edit] The linguist Otto Jespersen began his book Negation in English and Other Languages[2] with the words: "The history of negative expressions in various languages makes us witness the following curious fluctuation: the original negative adverb is first weakened, then found insufficient and therefore strengthened, generally through some additional word, and this in turn may be felt as the negative proper and may then in the course of time be subject to the same development as the original word. 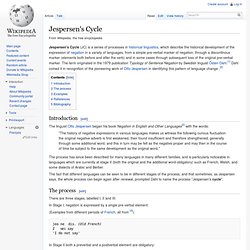 " The process has since been described for many languages in many different families, and is particularly noticeable in languages which are currently at stage II (both the original and the additional word obligatory) such as French, Welsh, and some dialects of Arabic and Berber. The process[edit] There are three stages, labelled I, II and III:

Accessible Introduction to Jesperson's Cycle. It was at the turn of the 20th century that a linguist named Otto Jespersen discovered a cyclical pattern in how languages express negation. 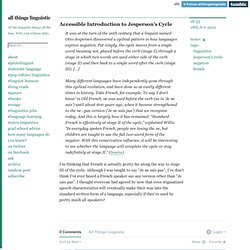 Put simply, the cycle moves from a single word meaning not, placed before the verb (stage I), through a stage in which two words are used either side of the verb (stage II) and then back to a single word after the verb (stage III). […]Many different languages have independently gone through this cyclical evolution, and have done so at vastly different times in history. Take French, for example. To say ‘I don’t know’ in Old French, ne was used before the verb (as in ‘Je ne sais’) until about 800 years ago, when it became strengthened to the ne…pas version (‘Je ne sais pas’) that we recognise today. And this is largely how it has remained: “Standard French is effectively at stage II of the cycle,” explained Willis. “In everyday spoken French, people are losing the ne, but children are taught to use the full two-word form of the negator. 11%20Luraghi%20final. Synrec2. Deriving Proto-World. Deriving Proto-World with tools you probably have at home Discussions of 'Proto-World' have gotten quite a bit of press lately-- not as much as Di's divorce, but about as much as any topic in historical linguistics ever gets.

Is there anything to it? Very probably not-- which is a pity, because getting back to Proto-World sounds like a lot of fun, and now it seems like the only alternative is to wait for aliens to come by who had a tape recorder running one or two hundred thousand years ago. Hans Henrich Hock gave a talk at CLS 29 on Ruhlen and Greenberg's "world etymology" maliq'a 'swallow, throat', pointing out quite a few serious methodological problems. It may be worth repeating some of his points. Now, there's no denying that seeing such a list is suggestive, and that it seems like there must be something in it.

Take a closer look at the list; the rules for this game are evidently quite lax. How likely are chance resemblances between languages? The first rule is, you must not fool yourself. And you are the easiest person to fool. --Richard Feynman On sci.lang we are often presented with lists of resemblances between far-flung languages (e.g. Basque and Ainu, Welsh and Mandan, Hebrew and Quechua, Hebrew and every other language, Basque and every other language), along with the claim that such resemblances "couldn't be due to chance", or are "too many" to be due to chance. Linguists dismiss these lists, for several reasons. All this is patiently explained, but it doesn't always convince those with no linguistic training-- especially the last point. So, even one resemblance (one of my favorites was gaijin vs. goyim) may be taken as portentous. The same question comes up in evaluating the results of Greenbergian mass comparisons; or proposals relating language families (e.g.