Practice and practise - Common confusions - Knowledge of Language. Why are these words spelled differently? 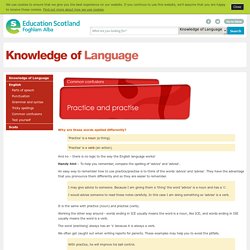 'Practice' is a noun (a thing). LearnMate.com.au - Engaging and Enthusiastic HSC & VCE Tutors! Contextual factors... what in the world does this even mean!? In this article, I am going to be demystifying the term 'context'... it seems to be thrown around a lot with students in VCE English Language and it seems that many students don't understand this crucial concept underlying all of our communications. 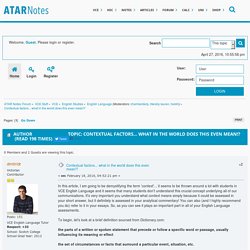 It's very important you understand what context means simply because it could be assessed in your short answer, but it definitely is assessed in your analytical commentary! George Carlin - Euphemisms. BBC Radio 4 - Radio 4 in Four, How to speak like Shakespeare. 187026e. Ferdinand_2_6. Diversity. Why is English used in so many places? 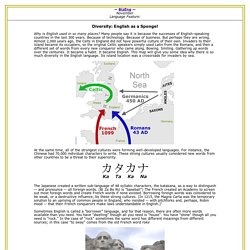 Many people say it is because the successes of English–speaking countries in the last 300 years. Because of technology. Because of business. But perhaps they are wrong. Almost 2,000 years ago, the Celts in England did not have powerful culture of their own. HistoryofEnglish-OldEnglish1. Boobook Education - VCE English Language. Language Typology - Reasons for Language Change. Early modern English pronunciation and spelling. By Edmund Weiner, deputy chief editor, OED In the late-fifteenth century printers began printing books written in the form of London English which had already become a kind of standard in manuscript documents. 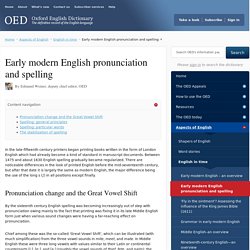 Between 1475 and about 1630 English spelling gradually became regularized. There are noticeable differences in the look of printed English before the mid-seventeenth century, but after that date it is largely the same as modern English, the major difference being the use of the long s (∫) in all positions except finally. Pronunciation change and the Great Vowel Shift By the sixteenth century English spelling was becoming increasingly out of step with pronunciation owing mainly to the fact that printing was fixing it in its late Middle English form just when various sound changes were having a far-reaching effect on pronunciation. A parallel change affected the back vowels of mouth and moot. Early modern English pronunciation and spelling. Indo-European Languages: Evolution and Locale Maps. Hans C. 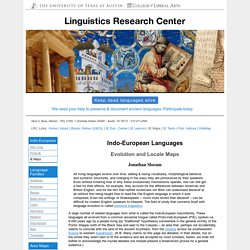 Boas, Director :: PCL 5.556, 1 University Station S5490 :: Austin, TX 78712 :: 512-471-4566 Jonathan Slocum All living languages evolve over time, adding & losing vocabulary, morphological behavior, and syntactic structures, and changing in the ways they are pronounced by their speakers. Even without knowing how or why these evolutionary mechanisms operate, one can still get a feel for their effects; for example, they account for the differences between American and British English, and for the fact that neither Americans nor Brits can understand Beowulf at all without first being taught how to read the Old English language in which it was composed.

Even the writings of Shakespeare -- much more recent than Beowulf -- can be difficult for modern English speakers to interpret. The History of English - Timeline. Hope-WPL.pdf. History of the English Language. LITR pages Craig White UHCL images. Maps for History of English Map 1 Great Britain = England, Scotland, Wales; Eire = Ireland. 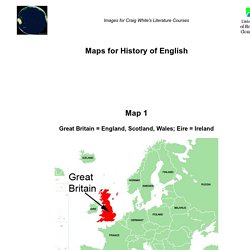 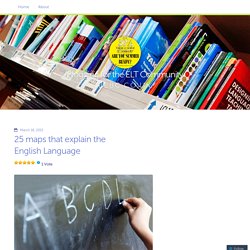 It’s spoken in dozens of countries around the world, from the United States to a tiny island named Tristan da Cunha. It reflects the influences of centuries of international exchange, including conquest and colonization, from the Vikings through the 21st century. Here are 25 maps and charts that explain how English got started and evolved into the differently accented languages spoken today. Parts of Speech. The History of English (An Overview) Cognitive language acquisition theories presentation. Noam Chomsky on Language: Theories, Lesson & Quiz. In this lesson, you will learn about the key theories of language development put forth by Noam Chomsky. 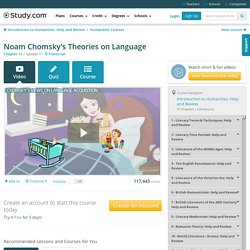 Following this lesson, you will have the opportunity to test your knowledge with a short quiz. World Languages Mandarin Chinese - World: Guānxì Resource Center. O'GRADY-First-Language-Acquistion-be-wfa.pdf. Stages of Development. Piaget's Stages of Cognitive Development Piaget concluded that there were four different stages in the cognitive development of children. 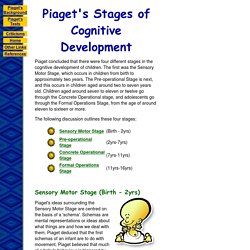 The first was the Sensory Motor Stage, which occurs in children from birth to approximately two years. The Pre-operational Stage is next, and this occurs in children aged around two to seven years old. Children aged around seven to eleven or twelve go through the Concrete Operational stage, and adolescents go through the Formal Operations Stage, from the age of around eleven to sixteen or more. The following discussion outlines these four stages: Sensory Motor Stage (Birth - 2yrs) Piaget's ideas surrounding the Sensory Motor Stage are centred on the basis of a 'schema'. Babies are unable to consider anyone else's needs, wants or interests, and are therefore considered to be 'ego centric'. During the Sensory Motor Stage, knowledge about objects and the ways that they can be manipulated is acquired. Innateness and Language. 1. 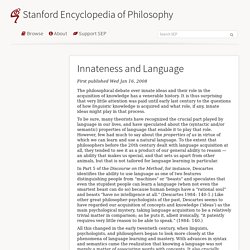 Chomsky's Case against Skinner The behaviorist psychologist B.F. Skinner was the first theorist to propose a fully fledged theory of language acquisition in his book, Verbal Behavior (Skinner 1957). His theory of learning was closely related to his theory of linguistic behavior itself. He argued that human linguistic behavior (that is, our own utterances and our responses to the utterances of others) is determined by two factors: (i) the current features of the environment impinging on the speaker, and (ii) the speaker's history of reinforcement (i.e., the giving or withholding of rewards and/or punishments in response to previous linguistic behaviors). Given his view that knowing a language is just a matter of having a certain set of behavioral dispositions, Skinner believed that learning a language just amounts to acquiring that set of dispositions.

The same points apply to comprehension. 36720_Levine_final_PDF_09. 4.1 child language acquisition theory – chomsky, crystal, Aitchison & piaget. The Nativist Perspective and Language Development. In this lesson, learn how we develop language according to the nativist perspective. O'GRADY-First-Language-Acquistion-be-wfa.pdf. Spoken Language Features flashcards. First Language Acquisition. Stages of language acquisition in children In nearly all cases, children's language development follows a predictable sequence. However, there is a great deal of variation in the age at which children reach a given milestone. Furthermore, each child's development is usually characterized by gradual acquisition of particular abilities: thus "correct" use of English verbal inflection will emerge over a period of a year or more, starting from a stage where vebal inflections are always left out, and ending in a stage where they are nearly always used correctly.

There are also many different ways to characterize the developmental sequence. On the production side, one way to name the stages is as follows, focusing primarily on the unfolding of lexical and syntactic knowledge: Determiners and quantifiers. PRONOUNS. Pronouns are words that substitute for nouns. Every pronoun must have a clear antecedent(the word for which the pronoun stands). A. Personal Pronouns: B. Literary Devices. ENG 411B Concepts. Morphemes consist of bases and affixes, each of which have meaning. Words can be made up of just a base, or a base plus one or more affixes.

Morphemes are divided into derivational morphemes and inflectional morphemes. Examine the differences here. An inflection is a change that signals the grammatical function of nouns, verbs, adjectives, adverbs, and pronouns (e.g., noun plurals, verb tenses). An inflectional morpheme is used to create a variant form of a word in order to signal grammatical information. Characteristics and Features of Language. Language is, today, an inseparable part of human society. Discourse analysis. What are all the literary devices? List them please!?

VISL - VISL Grammar Games. Essential Linguistics.pdf. Introduction to phonetic transcription. By Tomasz P. Szynalski © Tomasz P. Szynalski, Antimoon.com With phonetic transcriptions, dictionaries tell you about the pronunciation of words. A Linguistic Approach to Reading and Writing. What should we do to improve our reading and writing? Traditional Study Skills Approaches. Morphemic spelling knowledge.