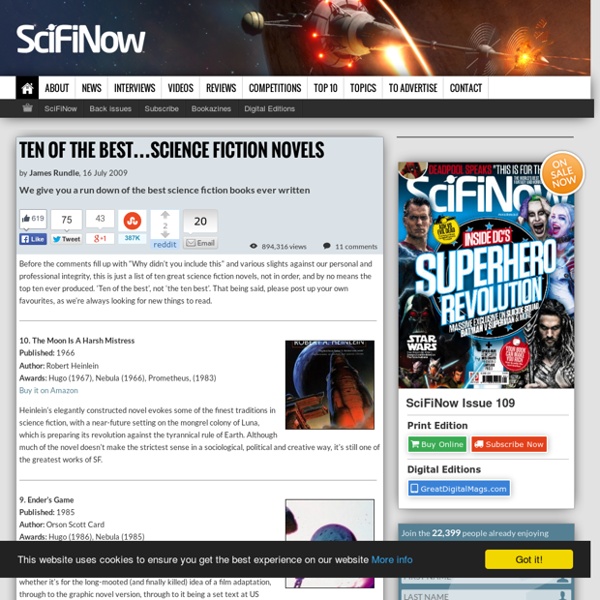 Before the comments fill up with “Why didn’t you include this” and various slights against our personal and professional integrity, this is just a list of ten great science fiction novels, not in order, and by no means the top ten ever produced. ‘Ten of the best’, not ‘the ten best’. That being said, please post up your own favourites, as we’re always looking for new things to read. 10. The Moon Is A Harsh MistressPublished: 1966 Author: Robert Heinlein Awards: Hugo (1967), Nebula (1966), Prometheus, (1983)Buy it on Amazon Heinlein’s elegantly constructed novel evokes some of the finest traditions in science fiction, with a near-future setting on the mongrel colony of Luna, which is preparing its revolution against the tyrannical rule of Earth. 9. | Kindle Edition 8. It’s nigh-on impossible to talk seriously about the post-apocalyptic subgenre of science fiction without mentioning Walter M Miller Jr’s A Canticle For Leibowitz. 7. | Kindle Edition 6. | Kindle Edition 5. | Kindle Edition 4.

Top 25 Best Fantasy Books This one is full to the brim with gritty, amoral, cynical dark humor. A different sort of fantasy, but one that's extremely refreshing, disturbing, and entertaining -- one of the best fantasy reads to come out the past couple years. Even as we near 2015, The Prince of Thorns still stands tall among other strong fantasy books. 10 Thrilling Dystopian Titles You Probably Haven't Read Nowadays, dystopian is the new vampire. Almost like clockwork, Bella Swan handed off her mantle to Katniss Everdeen. Shows like True Blood and The Vampire Diaries have been supplanted by dystopian lit’s big screen adaptations, from Veronica Roth’s Divergent series to Lois Lowry’s grade-school classic The Giver. Just as Twilight drew inspiration from Dracula—and a long line of lesser-known books sharing its basic genetic code—popular dystopian titles today are influenced by a sea of authors deserving your attention. So we rounded up 10 dystopian tales you may have never read (but really should). 1.

The Happy Couple Cheat Sheet: 15 Steps to a Balanced and Happy Marriage... Posted in Balanced Lifestyle, Balanced Relationships | October 27, 2009 | 27 Comments This post was written by Anastasiya. Follow me on Twitter or StumbleUpon and keep your life balanced! The other day my husband and I were talking about our marriage and how happy we are together.

The Selfish Gene by Richard Dawkins - All-TIME 100 Best Nonfiction Books - TIME Writing her lover’s “autobiography” proved a witty way for American author Gertrude Stein to detail her own life as Parisian writer, salon host and arts patron. Ostensibly, readers can take in the book, published in 1933, as Stein writing about Alice B. Toklas (which is what the title suggests) or as Toklas “writing” about Stein (which is what the book actually is). Measuring Battery Voltage with an ADC > Measuring Battery Voltage with an ADC How to measure the voltage on a power source that is greater than the maximum rating of your ADC If you are using a battery powered device, it's often useful to be able to measure the current voltage level on the battery to estimate how much stored energy is left.

25 Best Far Future Science Fiction Books - The Best Sci Fi Books Art by: ANTIFAN-REAL @ deviantART Far future science fiction (usually meaning about 10,000 years from now) is the most optimistic SF subgenre because it assumes humanity will still be around in some recognizable form. I’ve read that the most futuristic things you can put in a science fiction are technologies that are probably 50 years out: self-driving cars, total government surveillance, cyborgs a-plenty, Billy’s First Genetic Engineering Kit, and the like. In the list below, I’m defining “far future” to mean that the stories occur around 10,000 A.D. or later.

The Last Answer The Last Answer by Isaac Asimov — © 1980 Murray Templeton was forty-five years old, in the prime of life, and with all parts of his body in perfect working order except for certain key portions of his coronary arteries, but that was enough. The pain had come suddenly, had mounted to an unbearable peak, and had then ebbed steadily. 10 Most Unsettling Dark Comedies of All Time There's something about modern life that calls for dark humor. It seems appropriate that, in the face of adversities, the best form of defense is to poke fun at those very adversities through the time-honored American tradition of celebrating the macabre, the unsettling and the downright twisted. Here at "PopCrunch Towers" we decided to put together a list of the ten black comedies that made us feel the most genuinely uncomfortable; menacingly comic cinematic milestones that managed to be by turns â€” or at once â€” both funny and disturbing. So get your cringe muscles tensed, and we'll begin! 10.