The Racial Dot Map: One Dot Per Person for the Entire U.S. 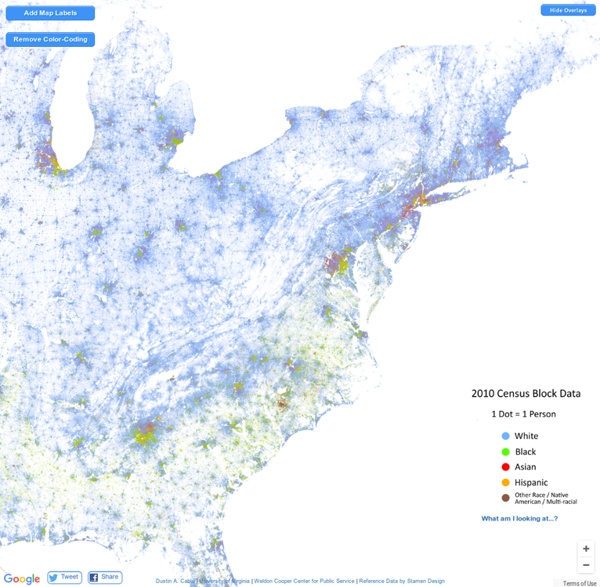 The Best Map Ever Made of America's Racial Segregation Last year, a pair of researchers from Duke University published a report with a bold title: “The End of the Segregated Century.” U.S. cities, the authors concluded, were less segregated in 2012 than they had been at any point since 1910. But less segregated does not necessarily mean integrated–something this incredible map makes clear in vivd color. The map, created by Dustin Cable at University of Virginia’s Weldon Cooper Center for Public Service, is stunningly comprehensive.

[Impressive Dataviz] Reshaping New York - Interactive Feature Loading Celebrating the Waterfront New buildings constructed during Mr. Bloomberg's tenure as mayor. 5 Beloved Traditions Invented to Make You Buy Stuff By Rebecca Zerzan Here's how some beloved traditions came about, including diamond engagement rings and the ubiquitous green-bean casserole. 1. Rudolph the Red-Nosed Reindeer The origin of Rudolph has nothing to do with Jesus or Santa.

The Postnational Monitor Average Spaniard Male Average Spaniard Female Average French Male Average French Female Detroit by Air You can learn a lot about a place by seeing it from the air. I’m a pilot and an aerial photographer; I am also trained as an architect. I’ve always been interested in how the natural and constructed worlds work together, and sometimes collide. Issues like income inequality also reveal themselves quickly from above, and in Detroit and the surrounding area, the stark contrast between the haves and the have-nots couldn’t be more apparent. Outside the city center, I flew over new homes built alongside lakes and country clubs.

Advanced GIS: Web GIS Note: The data presented here represents preliminary findings and should not be used without written permission from UCLA. This is a student draft of the data and is not to be used. Overview Reducing greenhouse gas emissions by reducing electricity consumption is a priority of the state of California. In 2009, California implemented SB 375, which requires Metropolitan Planning Organizations (MPOs) to create Sustainable Community Strategies to address these goals.

29 Things People From Seattle Have To Explain To Out-Of-Towners 1. Seahawk Fans Are Factually The Best Source: Seattle Seahawks Facebook Corelam™ Corelam™ is a plywood product whose corrugated profile adds strength while multiplying the natural visual appeal of wood. A panel of Corelam™ is much thinner, uses less material, and weighs far less than an ordinary flat plywood panel of the same size and strength. Corelam™ does more with less. [Carto temps réel] Geneva Sometimes bus riding can feel intimidating, but this visualization proves it: everybody's doing it. Pick a route off the map and watch a day in the life of the line. Buses speed by, passengers jumping on and off. Smart people listen to Radiohead and dumb people listen to Beyoncé, according to study How does a person’s intelligence relate to the type of music they listen to? For the last several years, a software application writer by the name of Virgil Griffith has charted musical tastes based on the average SAT scores of various college institutions. For example, students attending the California Institute of Technology have an average SAT score of 1520. By looking at Facebook to determine the most popular (or — “liked”) band of students at Cal Tech, Griffith was able to conclude that Radiohead really truly is music for smart people. A highly scientific study, I know. As Digital Inspiration points out, Griffith’s chart reveals Sufjan Stevens, Bob Dylan, The Shins, and — uh — Counting Crows as other favorite bands of smart people.

The 18 Things Women Love Most About Sex 18 is the minimum age (in most jurisdictions, at least) at which you’re legally empowered to have sex, and that makes it the perfect number for our list of things that ladies love about sex with you. What follows isn’t really a how-to. It’s more of a woman’s why-yes. Swing Table: Conference Furniture Sets Meetings in Motion Ever feel like your boss takes things a little too seriously? Well, it may be harder to be anything but a bit lighter-hearted when meeting around this unique variant of the classic boardroom table. Created by and for Duffy London, four slim posts support this table and the rails from which each suspended seat freely swings. The aesthetic manages to be smooth and professional but also industrial and fun, all angles and lines, white and wood, but beneath (or beyond) that overt class the functionality of a backyard swingset.