'Drone It Yourself' Lets You Create a Drone from Any Object 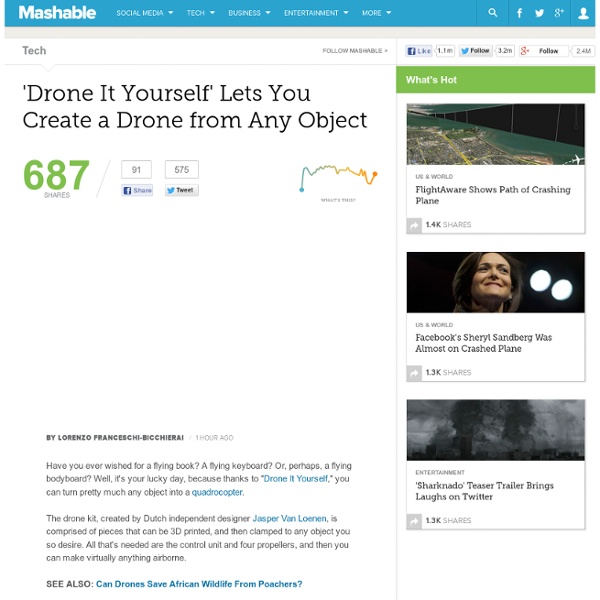 Have you ever wished for a flying book? A flying keyboard? Or, perhaps, a flying bodyboard? Well, it's your lucky day, because thanks to "Drone It Yourself," you can turn pretty much any object into a quadrocopter. The drone kit, created by Dutch independent designer Jasper Van Loenen, is comprised of pieces that can be 3D printed, and then clamped to any object you so desire. On his website, Van Loenen points out that the parts can be custom-designed, and that other DIY enthusiasts can modify them to make new add-ons for the quadrocopter drone. To find out more, check out the video, above. Image courtesy of Vimeo, Jasper Van Loenen

Quadcopter build log 1. Introduction This page will be a walktrough on the creation of my quadcopter. 2. Should you decide to build your own frame, start with drawings as every engineer does. Cross (aluminium square tubes from the local DIY shop) For the Dutch, Hornbach is your next stop ;-) Lower level of the "Hamburger", with light switch, power plug, Spektrum satellite receiver and LiPo low battery warner. 3. I decided to make a 'power ring' to provide the ESC's and other equipment with power. After supplying your ESC's with power, you have to program each ESC to let it function properly for a Quadcopter. Typical programming card Quadcopter setup. 4. Before you make your control board unreachable by wiring etc, be sure it's programmed with the latest firmware. Pin 1 on the KK board is located here: The Lazyzero KK multicopter flash tool is excellent for upgrading your control board to the firmware of your liking. The control board should contract less vibrations from the motors as possible. 5. 6. !! 7. 8.

10 Ways Google Glass Will Change Us — Whether We're Ready Or Not We have not fully appreciated what "Google Glass" (Google's term for its new wearable computer) will actually mean for our future. If this product is widely used there will be fundamental and irrevocable changes coming soon to our society — sooner than we think. I can envision at least 10: 1. Some would say that Jeremy Bentham's "panopticon" is already upon us. 2. If someone can access information about a real-world object instantly by merely looking at it in front of them, consider what the advertising industry could do with this product. 3. Safety concerns are already being voiced over Google Glass. 4. As we saw following the Boston bombing, the case was broken wide open due to a commercial surveillance video. 5. Legal challenges will abound. 6. Most professionals currently go to an office and bang out reports, memoranda, or emails on a keyboard day in and day out. 7. Traditional education today is (in most places) very outdated. 8. 9. 10.

scientists break record for thinnest light-absorber | Stanford News Release July 18, 2013 Stanford scientists have built the thinnest, most efficient absorber of visible light on record, a nanosize structure that could lead to less-costly, more efficient, solar cells. By Mark Shwartz These four wafers contain the thinnest light-absorber ever built. The absorber layer consists of billions of gold nanodots. Stanford University scientists have created the thinnest, most efficient absorber of visible light on record. "Achieving complete absorption of visible light with a minimal amount of material is highly desirable for many applications, including solar energy conversion to fuel and electricity," said Stacey Bent, a professor of chemical engineering at Stanford and a member of the research team. Thinner solar cells require less material and therefore cost less. For the study, the Stanford team created thin wafers dotted with trillions of round particles of gold. Visible spectrum Record results The results were record-setting. Final goal

Foam-squirting quadcopter becomes a flying 3D printer The swiftlet may not look much different than other little birds, but it has one unique ability – it builds its nest out of its own saliva. Inspired by the swiftlet, scientists at Imperial College London's Aerial Robotics Lab have created a robotic quadcopter that can extrude polyurethane foam while in flight. By targeting where that foam goes, it can build up simple structures, essentially becoming a flying 3D printer. The technology could have some very important applications. View all Developed mainly by Graham Hunt and other members of a team led by Dr. In its current form, the aircraft uses GPS and an external system of 16 infrared cameras to identify targets upon which to spray the foam, within an indoor lab. Down the road, however, Kovac's team hopes to create fully-autonomous UAVs equipped with their own high-speed cameras and 3D depth senors, that could function in a variety of chaotic, real-world conditions. Source: Imperial College London via New Scientist

The Higher Education Bubble Begins To Burst The Higher Education Bubble Begins To Burst Check out this New York Times article on the beginning of the bursting of the higher education bubble. In the 2012-2013 school year enrollment in for-profit and community colleges dropped. Now enrollment in 4 year non-profit colleges has begun dropping too. A Wall Street Journal article makes similar points. Some colleges will close. The number of kids turning 18 has begun to contract. I expect to a substantial shift toward online learning in order to save costs, speed up education, and get far greater convenience. The rise of massive open online courses (MOOCs) will let most students watch higher quality lectures than they can watch at which ever university they attend.

Researchers claim 3-D printers pose 'health risk' CHICAGO — Three-dimensional printers using the fused deposition molding (FDM) process could pose a health risk to operators, according to researchers from the Illinois Institute of Technology in the U.S. and the National Institute of Applied Sciences in Lyon, France. Writing in the journal Atmospheric Environment, Brent Stephens, Parham Azimi, Zeineb El Orch and Tiffanie Ramos note that “heated thermoplastic extrusion and deposition … is a process that has been shown to have significant aerosol emissions in industrial environments. “Because most of these devices [consumer FDM 3-D printers] are currently sold as standalone devices without any exhaust ventilation or filtration accessories, results herein suggest caution should be used when operating in inadequately ventilated or unfiltered indoor environments.” The researchers carried out their tests at a 3-D printing bureau in Chicago, The 3D Printing Experience.

July 2013: The Future Of Flight Dear Mr Editor, Re the Dalek Variable-Why do scientists and writers alike place so much faith in the Drake equation? It’s like a religion for them. For some reason, many scientists have chosen to ignore what 2 scientists have recently discovered. It’s a buzz-killer, but you have to scratch your head and wonder why with so much evidence of a miracle and ZERO evidence of extraterrestrial life, that so many consider it a given. (ref. www.technologyreview.com/view/424795/probability-of-et-life-arbitrarily-small-say-astrobiologists/ ) The fact that life even originated here is amazing. And here’s some numbers to chew on. Chinese Scientists Grow False Teeth From Human Urine Over the years scientists have made false teeth from a variety of materials – from cuspids crafted out of animal bone to chompers made from wood and gold. However a group of Chinese scientists just announced that they have successfully grown “rudimentary teeth” from an extremely unlikely and slightly unsettling source: human pee. According to the research, published in Cell Regeneration Journal, the tiny tooth-like structures were grown from stem cells harvested from urine. While the scientists believe it could herald a new, albeit disturbing, age for false teeth, stem cell researchers believe they could have several hurdles to overcome. The Chinese research team, which is based at the Guangzhou Institutes of Biomedicine and Health used urine as it contains cells that are normally passed out of the body – but in the laboratory they can be come stem cells. These cells were then mixed with organic material to form teeth. + Cell Regeneration Journal via BBC News Images © Wonderlane

New Zealand Man is 3D-Printing a Fully-Functional 1961 Aston Martin Replica New Zealander Ivan Sentch is 3D printing an entire 1961 Aston Martin DB4 replica! Using a CAD rendering from TurboSquid, which he modified to suit his design goals, Sentch has so far produced 2,500 fiberglass molds and four four-inch sections that he has mounted on a wooden frame and glued into place. He spent about $2,000 on plastics for the 3D printing, and now plans to build a mold for a fiberglass exterior shell. There are only 1,200 existing models of the 1961 Aston Martin DB4 in the world, each costing between several hundred thousand to $1 million on the auction circuit. Because of its limited availability, software engineers can’t get a hold of detailed designs, which eventually forced Sentch to crib a CAD rendering from TurboSquid to get his car built. It may not look like it, but Sentch has been using the 3D printing technology only since last December. So far he’s spent about $2,000 on the 3D printing material and still plans to create the exterior shell out of fiberglass.