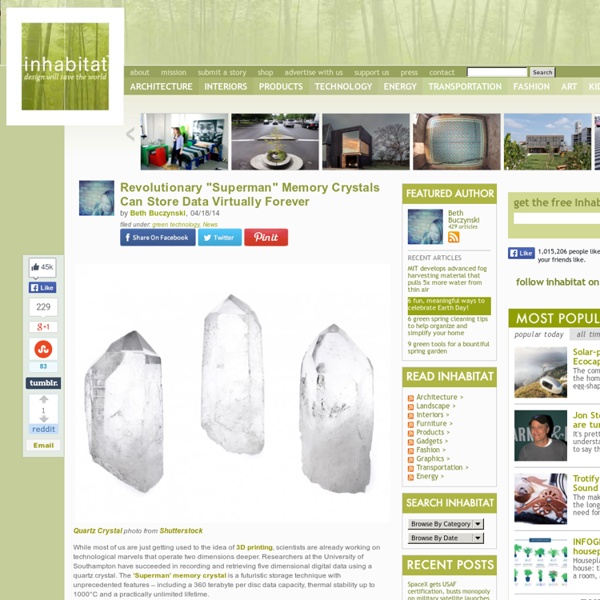 Quartz Crystal photo from Shutterstock While most of us are just getting used to the idea of 3D printing, scientists are already working on technological marvels that operate two dimensions deeper. Researchers at the University of Southampton have succeeded in recording and retrieving five dimensional digital data using a quartz crystal. The ‘Superman’ memory crystal is a futuristic storage technique with unprecedented features – including a 360 terabyte per disc data capacity, thermal stability up to 1000°C and a practically unlimited lifetime. We’ve all seen those sci-fi movies where a gorgeous alien shoves a pointy crystal into some mega computer and the world is saved. So how does it work? “The self-assembled nanostructures change the way light travels through glass, modifying polarization of light that can then be read by combination of optical microscope and a polarizer, similar to that found in Polaroid sunglasses,” states the release. Via Eureakalert and DVice

Perfect Faults: A Self-Correcting Crystal May Unleash the Next Generation of Advanced Communications Researchers from the National Institute of Standards and Technology (NIST) have joined with an international team to engineer and measure a potentially important new class of nanostructured materials for microwave and advanced communication devices. Based on NIST's measurements, the new materials—a family of multilayered crystalline sandwiches—might enable a whole new class of compact, high-performance, high-efficiency components for devices such as cellular phones.* "These materials are an excellent example of what the Materials Genome Initiative refers to as 'materials-by-design'," says NIST physicist James Booth, one of the lead researchers. "Materials science is getting better and better at engineering complex structures at an atomic scale to create materials with previously unheard-of properties." The new material has layers of strontium oxide, believed to be responsible for the self-correcting feature, separating a variable number of layers of strontium titanate. *C-H Lee, N.D.

New Zealand Man is 3D-Printing a Fully-Functional 1961 Aston Martin Replica New Zealander Ivan Sentch is 3D printing an entire 1961 Aston Martin DB4 replica! Using a CAD rendering from TurboSquid, which he modified to suit his design goals, Sentch has so far produced 2,500 fiberglass molds and four four-inch sections that he has mounted on a wooden frame and glued into place. He spent about $2,000 on plastics for the 3D printing, and now plans to build a mold for a fiberglass exterior shell. There are only 1,200 existing models of the 1961 Aston Martin DB4 in the world, each costing between several hundred thousand to $1 million on the auction circuit. Because of its limited availability, software engineers can’t get a hold of detailed designs, which eventually forced Sentch to crib a CAD rendering from TurboSquid to get his car built. It may not look like it, but Sentch has been using the 3D printing technology only since last December. So far he’s spent about $2,000 on the 3D printing material and still plans to create the exterior shell out of fiberglass.

4 Ways to Heal your Body using Crystals Now that we’ve made a post about all of the different types of crystals there are available, I thought it might be a good opportunity to talk about what we can use them for. Obviously, Crystals have many practical applications in the mainstream world. Did you know that all of our Computer Technology is based off of the core Element that Crystals are? Fyi – It’s Silicon, and that’s just the tip of the iceburg. So besides massive amount of Data Storage and Computing Technology, Crystals also can have an effect on your body too. Consider Crystals like Materia from FF7…. Here are 4 ways that you can use Crystals to facilitate healing in your body. Before we begin, let me share with you this prerequisite to using any and all of your crystals: Let them sit in the sun for several hours before you use them, this will charge them with the life-bearing energy of the sun, and it can be fuelled through the crystals into you. Now that your crystals are all charged, we can do the following 1. 2. 3. 4.

Hempcrete Could Change The Way We Build Everything When it comes to new and sustainable housing ideas, it seems to always be about creating a more efficient home in terms of insulation, lighting, electricity, etc. Mainstream belief on the subject would have you believe that top corporations and government projects are working with the best possible technology to bring forth solutions that work and are going to be great for the environment. If that was truly the case, I can guarantee you that the whole world would be using Hempcrete right now. Haven’t heard of it? I’m not too surprised. First off, what is Hempcrete? Since lime is the binding material, builders do not have to heat up the lime as much as a supplier would need to in the industrial creation of concrete. conservation when producing Hempcrete vs. concrete. Hempcrete is a much more superior building material due to the fact that it is a very strong, lightweight and breathable material. petrify but is still incredibly strong.

Chinese Scientists Grow False Teeth From Human Urine Over the years scientists have made false teeth from a variety of materials – from cuspids crafted out of animal bone to chompers made from wood and gold. However a group of Chinese scientists just announced that they have successfully grown “rudimentary teeth” from an extremely unlikely and slightly unsettling source: human pee. According to the research, published in Cell Regeneration Journal, the tiny tooth-like structures were grown from stem cells harvested from urine. While the scientists believe it could herald a new, albeit disturbing, age for false teeth, stem cell researchers believe they could have several hurdles to overcome. These cells were then mixed with organic material to form teeth. Prof Chris Mason, a stem cell scientist at University College London, said to BBC News that urine was a poor starting point and “was probably one of the worst sources [for stem cells]. Yes, there’s that and the fact that many people probably wouldn’t be too keen on urine-based teeth.

(1) Water Not For Sale March on Jasper Avenue in Edmonton. The future according to Google's Larry Page Note: On Jan 3, as Fortune published this article, the Federal Trade Commission ended its investigation of Google's search practices saying it found no evidence that the company manipulated search results in violation of antitrust laws. The European Commission and other regulators continue to investigate the issue. FORTUNE -- When Sir Martin Sorrell, CEO of WPP Group, the giant advertising agency, visited Google this past fall, CEO Larry Page sent a car to pick him up at the Rosewood Hotel about 20 miles away. Only this was no ordinary car. The Lexus SUV drove itself thanks to a slew of high-tech tools, including radars, sensors, and a laser scanner that takes more than 1.5 million measurements every second. For about 20 minutes, while navigating I-280 and the area's busy State Route 85, the car cruised on autopilot, making quick course corrections, slowing down here when traffic loomed ahead, speeding up there to get out of the blind spot of a neighboring vehicle. MORE: Meet the L-Team

Cradle turns smartphone into handheld biosensor CHAMPAIGN, Ill. - Researchers and physicians in the field could soon run on-the-spot tests for environmental toxins, medical diagnostics, food safety and more with their smartphones. University of Illinois at Urbana-Champaign researchers have developed a cradle and app for the iPhone that uses the phone's built-in camera and processing power as a biosensor to detect toxins, proteins, bacteria, viruses and other molecules. Having such sensitive biosensing capabilities in the field could enable on-the-spot tracking of groundwater contamination, combine the phone's GPS data with biosensing data to map the spread of pathogens, or provide immediate and inexpensive medical diagnostic tests in field clinics or contaminant checks in the food processing and distribution chain. "We're interested in biodetection that needs to be performed outside of the laboratory," said team leader Brian T. At the heart of the biosensor is a photonic crystal.

(5) Facebook The inevitability of smart dust I’ve put forward my opinion that desktop computing is dead on more than one occasion, and been soundly put in my place as a result almost every time. “Of course desktop computing isn’t dead — look at the analogy you’re drawing between the so called death of the mainframe and the death of the desktop. Mainframes aren’t dead, there are still plenty of them around!” Well, yes, that’s arguable. The desktop will increasingly belong to niche users. For the rest of the world? People never wanted computers; they wanted what computers could do for them. Everyday objects are already becoming smarter. The sensors you carry with you may well generate more data every second, both for you and about you, than previous generations did about themselves during the course of their entire lives. The end point of this evolution is already clear: it’s called smart dust. Makes desktop computing look sort of dull, doesn’t it? Photo: it’s not fog… it’s smoke… by Guilherme Jófili, on Flickr Related:

Researchers claim 3-D printers pose 'health risk' CHICAGO — Three-dimensional printers using the fused deposition molding (FDM) process could pose a health risk to operators, according to researchers from the Illinois Institute of Technology in the U.S. and the National Institute of Applied Sciences in Lyon, France. Writing in the journal Atmospheric Environment, Brent Stephens, Parham Azimi, Zeineb El Orch and Tiffanie Ramos note that “heated thermoplastic extrusion and deposition … is a process that has been shown to have significant aerosol emissions in industrial environments. “Because most of these devices [consumer FDM 3-D printers] are currently sold as standalone devices without any exhaust ventilation or filtration accessories, results herein suggest caution should be used when operating in inadequately ventilated or unfiltered indoor environments.” The researchers carried out their tests at a 3-D printing bureau in Chicago, The 3D Printing Experience.