Free will debate: What does free will mean and how did it evolve? 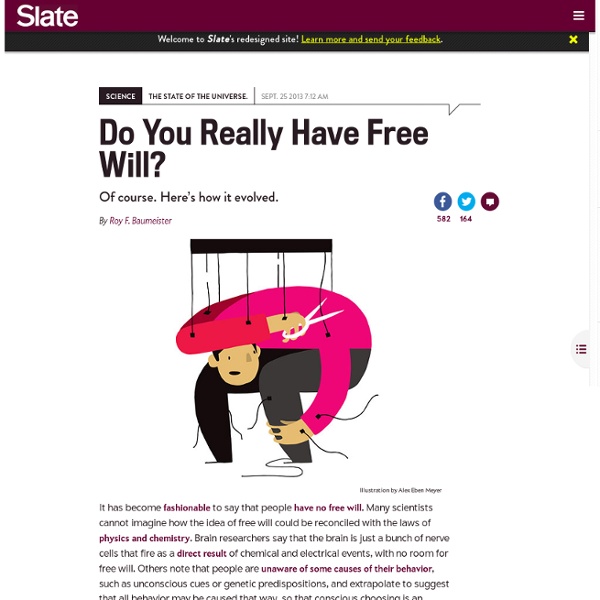 Illustration by Alex Eben Meyer It has become fashionable to say that people have no free will. Many scientists cannot imagine how the idea of free will could be reconciled with the laws of physics and chemistry. Brain researchers say that the brain is just a bunch of nerve cells that fire as a direct result of chemical and electrical events, with no room for free will. Scientists take delight in (and advance their careers by) claiming to have disproved conventional wisdom, and so bashing free will is appealing. Arguments about free will are mostly semantic arguments about definitions. These arguments leave untouched the meaning of free will that most people understand, which is consciously making choices about what to do in the absence of external coercion, and accepting responsibility for one’s actions. There is no need to insist that free will is some kind of magical violation of causality. Different sciences discover different kinds of causes. Does it deserve to be called free? Related:  Wind of Freedom 2016 • Fall 2013--Wind of Freedom • new docs

Genesis, from The holy Bible, King James version Bible, King James. Genesis, from The holy Bible, King James version Electronic Text Center, University of Virginia Library | The entire work (255 KB) | Table of Contents for this work | | All on-line databases | Etext Center Homepage | Is Free Will an Illusion? - The Chronicle Review Free will has long been a fraught concept among philosophers and theologians. Now neuroscience is entering the fray. For centuries, the idea that we are the authors of our own actions, beliefs, and desires has remained central to our sense of self. We choose whom to love, what thoughts to think, which impulses to resist. Neuroscience suggests something else. What's at stake? The Chronicle Review brought together some key thinkers to discuss what science can and cannot tell us about free will, and where our conclusions might take us.

Psychophysics: Are We Biological Billiard Balls? | Big Think | Errors We Live By Psychophysics secretly permeates our people-sciences (it assumes we’re motivated by physics-like forces). But as every infant—each a great causality detector—knows, but many scientists ignore, people aren’t biological billiard balls. 1. Locke become “the Newton of the mind,” (emulating his friend) by seeking the mind’s laws of motion (e.g. pleasure’s pull was basically “gravitational”~1689). 2. 3. 4. 5. 6. 7. 8. 9. 10. 11. Free will, real or not, changes practical predictability. Illustration by Julia Suits, The New Yorker cartoonist & author of The Extraordinary Catalog of Peculiar Inventions

Genesis — introduction Genesis is the first book of the Pentateuch (Genesis, Exodus, Leviticus, Numbers, Deuteronomy), the first section of the Jewish and the Christian Scriptures. Its title in English, “Genesis,” comes from the Greek of Gn 2:4, literally, “the book of the generation (genesis) of the heavens and earth.” Its title in the Jewish Scriptures is the opening Hebrew word, Bereshit, “in the beginning.” The book has two major sections—the creation and expansion of the human race (2:4–11:9), and the story of Abraham and his descendants (11:10–50:26). The Composition of the Book. Genesis 1–11. How should modern readers interpret the creation-flood story in Gn 2–11? Genesis 11–50. The historicity of the ancestral stories has been much discussed. Gn 25:19–35:43 are about Jacob and his twelve sons. The last cycle of ancestor stories is about Jacob’s son Joseph (37:1–50:26, though in chaps. 48–49 the focus swings back to Jacob). Genesis in Later Biblical Books. Preamble.

Free will : Routledge Encyclopedia of Philosophy Online ‘Free will’ is the conventional name of a topic that is best discussed without reference to the will. Its central questions are ‘What is it to act (or choose) freely?’, and ‘What is it to be morally responsible for one’s actions (or choices)?’ These two questions are closely connected, for freedom of action is necessary for moral responsibility, even if it is not sufficient. Philosophers give very different answers to these questions, hence also to two more specific questions about ourselves: (1) Are we free agents? Incompatibilists hold that freedom is not compatible with determinism. The incompatibilists have a good point, and may be divided into two groups. The second group of incompatibilists is less sanguine. Suitably developed, this argument against moral responsibility seems very strong.

Mysterious Statistical Law May Finally Have an Explanation Olena Shmahalo/Quanta Magazine Imagine an archipelago where each island hosts a single tortoise species and all the islands are connected — say by rafts of flotsam. As the tortoises interact by dipping into one another’s food supplies, their populations fluctuate. In 1972, the biologist Robert May devised a simple mathematical model that worked much like the archipelago. Little did May know, the tipping point he discovered was one of the first glimpses of a curiously pervasive statistical law. The law appeared in full form two decades later, when the mathematicians Craig Tracy and Harold Widom proved that the critical point in the kind of model May used was the peak of a statistical distribution. “The big question was why,” said Satya Majumdar, a statistical physicist at the University of Paris-Sud. More from Quanta Magazine: Universality is “an intriguing mystery,” said Terence Tao, a mathematician at the University of California, Los Angeles who won the prestigious Fields Medal in 2006.

Free Will Stanford Encyclopedia of Philosophy 1. Rational Deliberation 1.1 Free Will as Choosing on the Basis of One's Desires On a minimalist account, free will is the ability to select a course of action as a means of fulfilling some desire. David Hume, for example, defines liberty as “a power of acting or of not acting, according to the determination of the will.” (1748, sect.viii, part 1). One reason to deem this insufficient is that it is consistent with the goal-directed behavior of some animals whom we do not suppose to be morally responsible agents. 1.2 Free Will as deliberative choosing on the basis of desires and values A natural suggestion, then, is to modify the minimalist thesis by taking account of (what may be) distinctively human capacities and self-conception. Here we are clearly in the neighborhood of the ‘rational appetite’ accounts of will one finds in the medieval Aristotelians. 1.3 Self-mastery, Rightly-Ordered Appetite 2. 3. 3.1 Free Will as Guidance Control Proponents of the event-causal account (e.g. 4.

Free Will New Advent (Catholic Encyclopedia) Please help support the mission of New Advent and get the full contents of this website as an instant download. Includes the Catholic Encyclopedia, Church Fathers, Summa, Bible and more — all for only $19.99... The question of free will, moral liberty, or the liberum arbitrium of the Schoolmen, ranks amongst the three or four most important philosophical problems of all time. It ramifies into ethics, theology, metaphysics, and psychology. Relation of the question to different branches of philosophy (1) Ethically, the issue vitally affects the meaning of most of our fundamental moral terms and ideas. (2) Theology studies the questions of the existence, nature and attributes of God, and His relations with man. (3) Causality, change, movement, the beginning of existence, are notions which lie at the very heart of metaphysics. (4) Again, the analysis of voluntary action and the investigation of its peculiar features are the special functions of Psychology. History Catholic doctrine Proof