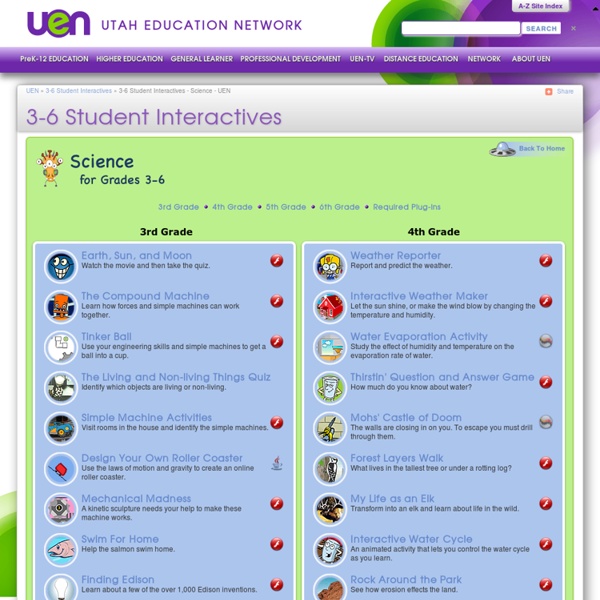 Quantum Physics Quantum Physics What it is? Quantum physics is a branch of science that deals with discrete, indivisible units of energy called quanta as described by the Quantum Theories. Quantum physics invloves the study of the realm of the very small, at the atomic and subatomic level, such as electrons, photons and quarks. Therefore, it’s operating at the below-cell level of the body. Quantum Physics is also the study of the forces that act on atomic and subatomic entities. Physics Flash Animations We have been increasingly using Flash animations for illustrating Physics content. This page provides access to those animations which may be of general interest. The animations will appear in a separate window. The animations are sorted by category, and the file size of each animation is included in the listing.

Lesson Plans The lesson plans presented here are a sampling from NWF's collection of over 1,000 lesson plans designed to introduce students to life science, ecology, wildlife biology, scientific identification and observation. All lesson plans are aligned to the National Science Education Standards. Check back regularly! We will be continually adding to our online library of resources for educators, beginning with the addition of lesson plans from our NatureScope series. Habitat Lessons designed to introduce students to concepts of ecology, habitat care and species identification:

10 Great Android Science Apps for Students June 3 , 2015 Explore the wonders of science with these Android apps specifically curated for kids, young learners and science enthusiasts. We selectively compiled this list to comprise what we think are among the best science apps out there. Using these apps, kids will get to engage with a variety of learning tasks involving different science phenomenon and covering various disciplines including: astronomy, human anatomy,biology, and many more. 1- Kids Measurement Science Lite “Young scientists learn to analyse the physical world by measuring across a variety of domains - time, size, weight and money. 5-8 year old kids measure length, weight, time and money in this science app using a tape, a scale, a clock and coins in 20 exercises. Full version has 300+ exercises of increasing difficulty.”

50 Really Cool Online Tools for Science Teachers A 21st-century education revolves around the Internet for everything from collaboration, tools, lessons, and even earning degrees online. If you are looking for ways to integrate online learning into your science class or science degree programs, then take a look at these cool online tools that are just perfect for both teachers and students. Science Tools to Use with Students These tools offer opportunities for learning about climate, cells, the human body, nature, and more. KQED Public Media for Northern CA Powerful Genetic Test Prevents Paternity Mix-Up A couple who used a fertility clinic to conceive was ready to sue when the child’s blood type didn’t match up with mom and dad’s. Obviously the clinic had used the wrong sperm or made some other awful mistake. Except in this case they probably hadn’t.

Your Amazing Bran The first stop on the virtual brain tour takes a look at the three main parts of the brain, the cerebral cortex, the cerebellum and the brain stem. It also explores the four brain lobes: the frontal lobe, the parietal lobe, the temporal lobe and the occipital lobe. The first part of the brain to evolve some 500 million years ago was the brain stem. It is also known as the reptilian brain or lower brain. Certain ‘hardwired’ body functions e.g., breathing and blood pressure, as well as some basic human instincts like danger are controlled by the lower brain. The cerebellum evolved about 400 million years ago and is also known as the hind brain.